'Nobody believes in us': Toffoli scores in OT, Habs beat Jets to complete sweep

Tyler Toffoli and his teammates knew they weren't given much of a chance heading into the playoffs. 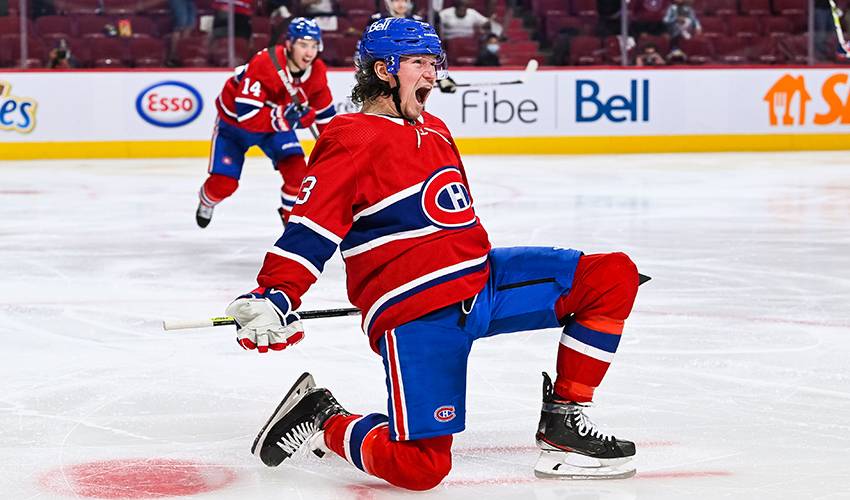 MONTREAL — Tyler Toffoli and his teammates knew they weren't given much of a chance heading into the playoffs.

And, quite frankly, with good reason.

The last of 16 clubs to qualify, the Montreal Canadiens suffered through a condensed schedule because of a COVID-19 outbreak and won just one of their final nine regular-season games inside 60 minutes.

Now — improbably — they're the first team moving onto the semifinals of the Stanley Cup tournament in the NHL's craziest campaign to date.

Toffoli scored at 1:39 of overtime Monday as the Canadiens defeated the Winnipeg Jets 3-2 to complete a surprising four-game sweep of their second-round series.

The sniper, who found the back of the net 28 times during the pandemic-shortened season, buried the winner after taking a cross-ice pass down low from rookie Cole Caufield and firing his fourth of the playoffs past Connor Hellebuyck.

"It kind of feels like nobody believes in us," Toffoli said. "The only people we have are ourselves and our fans ... and our friends and family.

Erik Gustafsson and Artturi Lehkonen had the goals in regulation for Montreal, which has won seven straight post-season contests, including three in a stunning comeback from down 3-1 against the Toronto Maple Leafs in the opening round. Toffoli also had an assist to give him 10 points in 11 playoff games.

"There's not one moment that we doubted our team," Canadiens captain Shea Weber said of Montreal's trying season. "Things were hard and teams go through difficult times. This is an especially tough year on a lot of teams.

"The schedule wasn't easy ... things were tough, but I thought we battled through and that can help you in these situations."

Carey Price made 14 saves for the North Division's No. 4 seed in front of another boisterous crowd of 2,500 fans at the Bell Centre.

The Canadiens' playoff win streak, which includes back-to-back OT wins against the Leafs while facing elimination, is the franchise's longest since Patrick Roy led Montreal to 11 consecutive victories on the way to capturing Canada's last Cup in 1993.

"I've been dreaming about bringing it back to Montreal one day," Canadiens centre Phillip Danault, who was born in Victoriaville, Que., in 1993. "This is our chance."

"Every year is different," interim head coach Dominique Ducharme added. "You look back at those guys, it's special. There's something special in our group.

"Can we write our own story? That's what we want to do."

Ducharme's team hasn't trailed since Game 4 against Toronto — a stretch of 437 minutes 53 seconds that sits second in NHL playoff history behind the 1960 Canadiens (488:38).

Montreal now awaits the winner between the Colorado Avalanche and Vegas Golden Knights, who are tied 2-2 with Game 5 set for Tuesday in Denver. The Canadiens improved to 34-0 all-time when leading a series 3-0, and upped their NHL record with the franchise's 23rd sweep.

"Every chance you get is a golden one," said Price, who has a .935 save percentage in the 2021 post-season. "These guys are playing as well as any team has ever played."

Winnipeg — which registered a sweep of its own against Connor McDavid's Edmonton Oilers thanks to three consecutive OT decisions, but was minus No. 1 centre Mark Scheifele after he was suspended four games for charging on Montreal forward Jake Evans in the series opener — got two goals from rookie defenceman Logan Stanley.

"They're playing at a really high level right now," said Jets captain Blake Wheeler, whose team fell to 1-6 when facing elimination. "You just have to give them all the credit.

The Canadiens were without top-4 defenceman Jeff Petry (upper-body injury) after he appeared to jam his right hand caught in one of the camera holes along the glass in Game 3. The veteran blue-liner's absence paved the way for rookie Alexander Romanov to make his NHL playoff debut.

Winnipeg, which owned a 6-3-0 record and averaged better than three goals a game against the Montreal in the regular season, found the back of the net just three times on Price after a 5-3 loss in Game 1.

"It was extreme," Jets head coach Paul Maurice said of being involved in consecutive sweeps. "The story of the year — just extreme."

The Canadiens opened the scoring on the power play 8:01 into Monday on Gustafsson's first-career playoff goal, and first with Montreal since being acquired from Philadelphia prior to the trade deadline.

After Jets forward Nate Thompson inexcusably failed to get the puck out of his own zone, the Canadiens worked it back to Gustafsson, who pump-faked a one-timer before changing the angle and firing through a screen.

Winnipeg had a couple of good looks on its first man advantage, but Price, who registered a shutout in Game 2 and allowed one against in Wednesday's 5-1 victory in Game 3, was there at every turn.

Montreal then made it 2-0 with 51 seconds left in the period when Lehkonen won a battle for positioning in front — something Winnipeg was unable to do at either end of the ice throughout much of the series — and tipped Brett Kulak's point shot for his second in as many games.

With their season on the line, the Jets got life from an unlikely source after the break. Stanley, a bruising six-foot-seven rookie defenceman, took a pass before wiring a shot upstairs on Price's shortside just 1:40 into the second.

The 23-year-old was at it again — Stanley had one NHL goal before Monday — at 5:29 moments after Hellebuyck made a nice save on Brendan Gallagher when he beat Price on a one-timer from well out the netminder should have had to tie it 2-2.

"It's all bitter right now," Stanley said. "In the playoffs, it doesn't matter who scores."

Hellebuyck made a number of stops in the third as Montreal held a 13-1 shots edge on Winnipeg at one point before Price denied Paul Stastny on the doorstep at the other end to set the stage for Toffoli's OT heroics.

"That's definitely one of the bigger ones," he said. "We're doing a good job.

"And it feels like we're all playing as one."

Just don't expect the Canadiens to be looking back following some well-deserved time off after playing 11 games in 19 days.

"Nothing yet, to be honest," Weber said when asked what his team, which finished 18th in the overall standings, has shown a skeptical hockey world. "Doesn't mean a whole lot. It's a step in the right direction and we're moving forward.

"But we definitely can't be satisfied."

This report by The Canadian Press was first published June 7, 2021.