Alex Nedeljkovic has been the trusted netminder for the Carolina Hurricanes as a postseason first-timer. 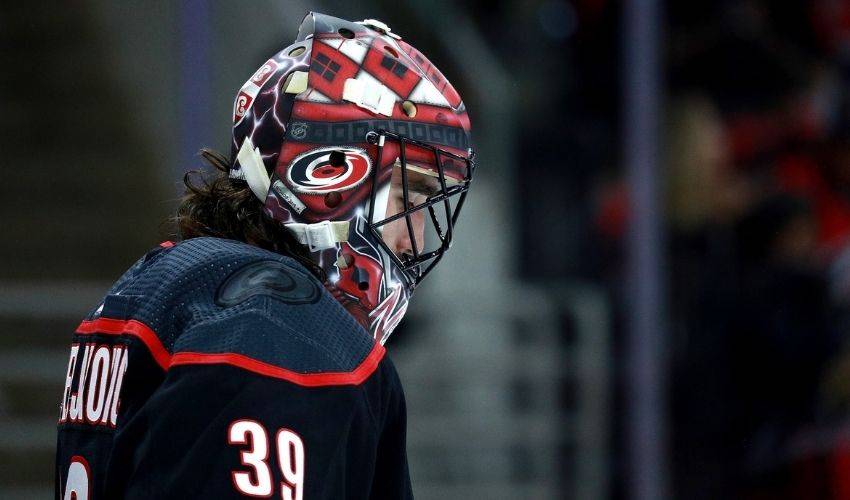 RALEIGH, N.C. (AP) — Alex Nedeljkovic has been the trusted netminder for the Carolina Hurricanes as a postseason first-timer.

Now he has to shake off a mistake and maintain the composed form that has powered his ascent.

Nedeljkovic has started all seven Hurricanes playoff games and is one of six goaltenders with at least one postseason shutout entering Monday's games.

Managing those ups and downs is the challenge for Nedeljkovic as the Hurricanes host the reigning Stanley Cup champs Tuesday in Game 2 of the best-of-seven series.

“It’s really honestly no different than any other kind of position I’ve been in,” Nedeljkovic said before the series. “There’s obviously more people in the building now, so it’s a bigger audience. ... You’ve got to try to stay as even-keeled as possible, ride the highs and then try to obviously get out of the lows as quick as you can because they’re going to be there.”

The 25-year-old Nedeljkovic has blossomed for a team that started the year planning to lean on veterans Petr Mrazek and James Reimer. Earning more work with Mrazek sidelined by injuries, Nedeljkovic posted franchise records with a 1.90 goals-against average and a .932 save percentage (minimum 15 games) along with three regular-season shutouts.

Coach Rod Brind’Amour turned to Nedeljkovic as the starter throughout the first-round series against Nashville, with Nedeljkovic looking sharp and sometimes spectacular — such as when he stopped a 2-on-0 breakaway on the road — while being a capable puck-handler as one of several rookies making an early playoff impact.

Against the Lightning, he stopped 24 of 25 shots through 2 1/2 periods Sunday until Barclay Goodrow snapped a shot from a sharp left angle. Nedeljkovic left space between his pad and post, allowing the puck to slip through in a 1-1 game.

Brind’Amour said Monday the team has “a lot of trust” in Nedeljkovic and noted: “We all make mistakes.”

“I talked to him this morning and I just told him that it’s not a big deal,” defenseman Brady Skjei said, adding: “He’s been a stud.”

Nedeljkovic won two of three regular-season meetings with Tampa Bay, shutting them out Feb. 20 and allowing one goal April 20.

“He plays the puck better than most, which is an asset to them,” Lightning coach Jon Cooper said. “And I’ve been blessed to have some goalies here throughout the years that play the puck like that, so I know what an advantage it can be. But he competes hard in the net.”

Brind’Amour isn’t the first coach to trust Nedeljkovic as a rookie goaltender. Mike Vellucci leaned on him as a 16-year-old with Plymouth of the Ontario Hockey League. Nedeljkovic rewarded that trust with a trip to the conference final.

“He’s already been in big games,” Vellucci said in a phone interview Sunday with The Associated Press. “He’s been used to the pressure.”

Vellucci joined Carolina and had a major influence on Carolina drafting Nedeljkovic 37th overall in 2014.

“I just saw the talent from a hockey standpoint and then the work ethic and the determination,” said Vellucci, now a Pittsburgh assistant.

“He never quit. He battled on every save, so I just figured once he got the technical part down a little bit better positioning-wise that if he makes that first save, or if he doesn’t make that first save, that he had that will and that determination to make the next one or the next one after that.”

Nedeljkovic didn’t have a high save percentage his first professional season in the American Hockey League and struggled with consistency. Veteran Michael Leighton, who backstopped Philadelphia to the 2010 Stanley Cup Final, took him to dinner in Charlotte to offer advice about the mental approach needed in the pros.

“These young kids come in and they just don’t know what to expect,” said Leighton, the AHL’s career shutout leader. “It’s tough when you’re playing every night and there’s a lot of pressure on you to play good every night, and if you have a bad game, it’s tough to rebound sometimes and have the mindset of getting right back in the net.”

Vellucci became Charlotte’s coach and trusted Nedeljkovic again. That time, he led the Checkers to the Calder Cup title in 2019.

Nedeljkovic is chasing a similar ascent with Carolina.

“I don’t believe Ned’s a late bloomer,” Vellucci said. “I believe that he’s been more than ready and capable. And it’s just a matter of when he got his opportunity, he made the most of it.”