Zach Parise and Kirill Kaprizov scored for the Wild. Cam Talbot made 29 saves. 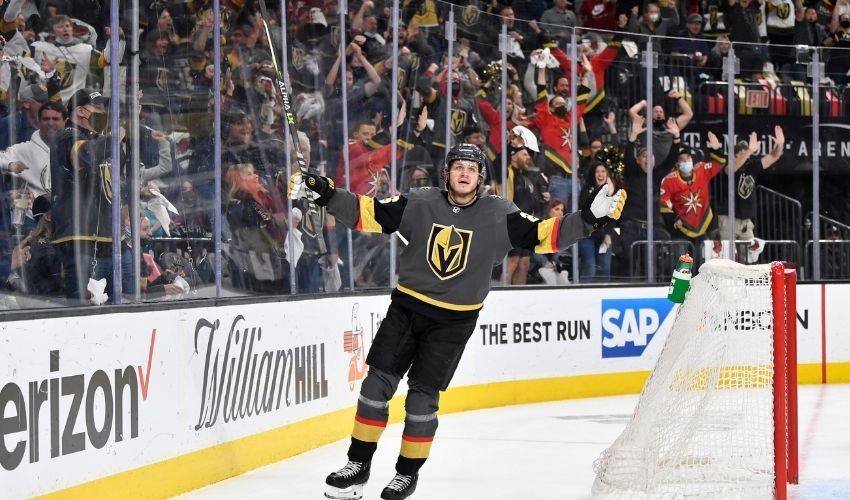 LAS VEGAS (AP) — Mattias Janmark had his first career hat trick and the Vegas Golden Knights eliminated the Minnesota Wild with a 6-2 win Friday night in Game 7 of their opening-round series.

It marked the first time the Golden Knights hosted a Game 7 after losing in San Jose in 2018 and defeating Vancouver in Edmonton last year. It was also the first time Vegas clinched a playoff series at home.

Nic Hague, Max Pacioretty and Zach Whitecloud also scored for Vegas. Marc-Andre Fleury, playing in his eighth career Game 7, made 19 saves to earn his 85th playoff victory in front of an announced crowd of 12,156. Fleury is three playoff wins shy of tying Billy Smith and Ed Belfour for fourth in NHL history.

Vegas, which squandered a 3-1 series lead for the third straight season, heads to Denver for Sunday’s second-round opener against the Colorado Avalanche.

Peter DeBoer improved to 6-0 when coaching in Game 7s, while Minnesota dropped to 3-1 all-time in a seventh game. Home teams in Game 7s are 105-74, excluding last season’s playoff bubble in Canada.

Zach Parise and Kirill Kaprizov scored for the Wild. Cam Talbot made 29 saves.

Janmark set the tone as he fought the pressure to create his own rush, then went forehand-to-backhand and used a filthy deke before softly tapping the puck past Talbot’s right skate.

Parise, who started the series scratched from the lineup, positioned himself perfectly in front of the crease for Joel Eriksson Ek’s feed, which he sent between both his legs and Fleury’s to make it 1-1.

Sitting at the blue line after William Karlsson won a faceoff to the right of Talbot, Hague — the only Golden Knights skater in the lineup who hadn’t played in a Game 7 — fired a wrist shot stick side and into the net to give Vegas a 2-1 advantage. It was Hague’s first goal in 24 games dating to the regular season.

Moments after Ryan Reaves was called for cross-checking Ryan Suter, Kaprizov's snapper from the edge of the left circle beat Fleury to his glove side.

In his first game of the series, Pacioretty sneaked into the slot and one-timed Chandler Stephenson’s feed from the boards past the pads of Talbot to put Vegas back on top, 3-2.

Later in the second, defenseman Shea Theodore unselfishly passed up an opportunity to fire one on net, dished to his right for Whitecloud, who found the far, top corner to extend Vegas’ lead to 4-2.

Theodore snapped a scoreless series drought with assists on Pacioretty and Whitecloud’s goals.

After playing aggressively through the first two periods, once again dominating the second, the Knights played low-risk hockey in the third while keeping the Wild at bay until Janmark scored his second after Nicolas Roy stripped Ryan Suter behind the net. Roy fed Janmark, who snapped the puck over Talbot’s far shoulder.

Janmark’s empty-netter with a little more than three minutes left put the game out of reach.