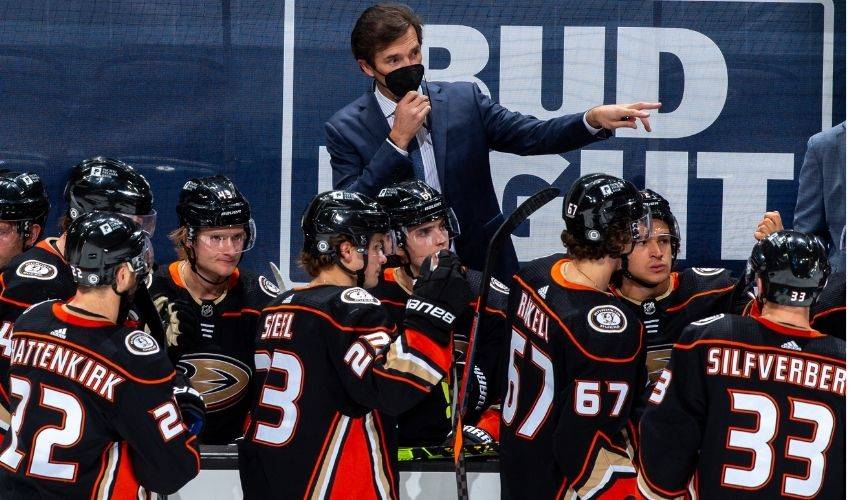 ANAHEIM, Calif. (AP) — General manager Bob Murray and head coach Dallas Eakins will return to the Anaheim Ducks next season after the club missed the playoffs for the third consecutive year.

Murray has run the Ducks' front office since November 2008, while Eakins has completed two losing seasons behind Anaheim's bench. The franchise is at a low point after finishing next-to-last in the NHL while missing the playoffs in three straight years for the first time since 2002, but Murray remains confident he can steer the Ducks back to contention.

“A lot has been said about this being a lost season, and I don't agree with that totally,” Murray said. "Some of the young guys have got along really well, and a couple didn't. A couple of the middle-aged guys have had a couple of lost years. But whenever you're going through this — call it rebuild, retool, remodel, reset — whatever you want to call it, it's a plan. ... We want to make a team that's faster, younger, and they play an exciting brand of hockey that our fans want to come and see play.”

Owners Henry and Susan Samueli remain confident in Murray and his leadership group even after the Ducks finished last in the league in goals for the second time in three years. Their power play scored only 8.9% of the time — the lowest percentage in modern NHL history — and Murray stopped just short of confirming Eakins will get a new assistant coach to supervise the unit.

But the grim on-ice results didn't yet reflect the optimism felt by Murray and many of the Ducks' players about their young core built around Trevor Zegras, Jamie Drysdale, Max Comtois, Isac Lundeström and Troy Terry, among others. Murray believes he has assembled some ingredients of a winner, and he intends to add to it in a busy offseason.

“A couple of these young players in our organization are going to be top-six forwards,” Murray said. “I think our young goaltenders in the organization played very well. ... You’ve got boxes you fill as you build a hockey team, and I know some of those young guys are going to fill those boxes now.”

The Ducks still aren't sure about the future of captain Ryan Getzlaf, whose contract is up this offseason. The 36-year-old playmaker has spent his entire career in Anaheim, and Murray recently met with Getzlaf to discuss his plans.

“He's obviously at the point in his career where he needs to take a little step back and see what's best for his family and what he thinks his role can be,” Murray said. “We discussed roles on the hockey team. Ryan and I discussed a whole bunch of things, and we will continue to have discussions.”

After finishing ahead of only Buffalo in the combined NHL standings, the Ducks have a 12.1% chance of securing the first No. 1 overall pick in franchise history. Anaheim can fall no lower than fourth, which means the club is guaranteed to have its highest draft choice since picking Bobby Ryan second overall in 2005.

But the Ducks haven't had any luck in recent draft lotteries, prompting Murray to feel that “it might be a win for a change just not to fall, because every year we fall.”

The Ducks have a long history of solid drafting and player development under Murray, and he isn't chagrined by the fact his offensively challenged team holds a high pick in a draft with mostly defensemen and goalies considered to be its top prospects.

“We're going to take, as we always have, the best player,” Murray said. “We won't make our list by position. The best player available, and then as it goes down the road, you can always — defensemen are always valuable to move. Everybody needs defense.”