Daniel Walcott was already excited to be in his first NHL game. He got even more excited when he got to see how his debut would happen. 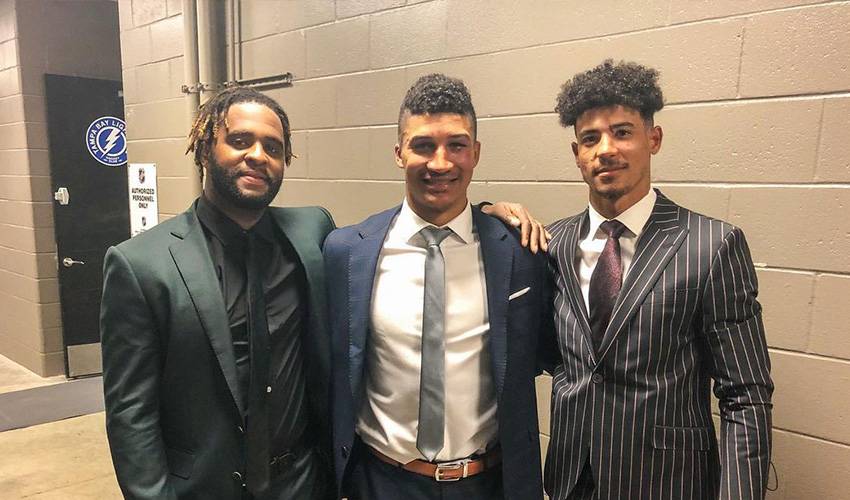 SUNRISE, Fla. — Daniel Walcott was already excited to be in his first NHL game. He got even more excited when he got to see how his debut would happen.

The Tampa Bay Lightning started three Black forwards in their regular-season finale against the Florida Panthers on Monday night, a rarity in NHL history — if not an absolute first. Walcott, Mathieu Joseph and Gemel Smith were out together for the opening face-off and didn’t know they would be starting together until just minutes before game time.

“First of all, they’re all in the NHL for a reason,” Tampa Bay coach Jon Cooper said. “They deserve to be here and have worked their tails off. To have them all together, they had a little chemistry. Moving forward in the league, you hope it isn’t a story anymore and will be the norm. It was a pretty cool moment for all those guys.”

Florida won the game, 4-0. The teams will meet in the first round of the NHL playoffs that start this weekend.

Roughly 3% of NHL players are Black, even though hockey and its teams have increased efforts in recent years to add to diversity within the sport through various feeder programs, some of them funded by the league.

The starting lineup was even applauded by the Panthers. Florida forward Anthony Duclair, who is Black, said he noticed it in the Panthers’ locker room pregame and was moved.

“That’s great to see,” Duclair said. “The way that the NHL is moving forward, it’s great to see for those guys and I’m sure it was a special night for them.”

It's unclear how many times such a trio of Black forwards have been on the ice together in any pro league before, but it has happened — at least in the minor leagues.

Earlier this season in the American Hockey League, the Los Angeles’ Kings top affiliate in Ontario, California, dressed an all-Black line of Akil Thomas, Quinton Byfield and Devante Smith-Pelly. Thomas is one of the Kings’ top prospects, Byfield as the No. 2 pick in the 2020 draft was the highest Black player selected in NHL history and Smith-Pelly was a playoff hero for the Washington Capitals when they won the Stanley Cup in 2018.

Thomas told reporters in March that his father, Khalil Thomas, once played on a team that started five Black players — everyone but the goalie — in the minors.

“Hopefully one of these days we’ll see that happen,” Akil Thomas said.

Smith was in his fifth game of the season and Joseph has been in the lineup for all 56 Tampa Bay games in 2020-21.

“It was great, man,” Joseph said. “A step in the right direction. It was fun to have some progress and it was great to see and I was glad I was part of it. ... Any players of in this league want to showcase to our families or other people of . I thank the coaching staff for doing this.”

Walcott said he hopes young Black kids with an interest in hockey look at something like Monday night and find hope. He said he got the word from Cooper on Sunday night that he was likely to make his debut, but wasn’t told who his linemates would be for the game.

“A whirlwind of emotion, a long time coming,” Walcott said. “To get into that starting lineup was great. ... Coop did something really special here to promote this for young kids.”