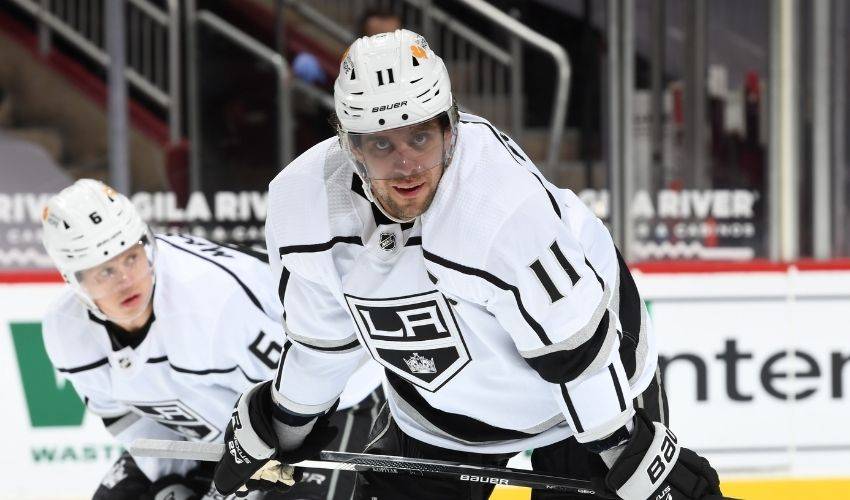 “It's definitely exciting/nerve-wracking,” Kopitar said. “I caught myself thinking about it a little too much and told myself to relax a little bit, play and just let it happen.”

The Coyotes got some good news in their longshot bid to make the playoffs when St. Louis lost to Anaheim.

The Kings ended Arizona's hopes and bolstered their own longshot chances in the Coyotes' home season finale.

Cal Petersen had 28 saves and Jaret Anderson-Dolan also scored for Los Angeles, which trails the Blues by eight points but has five games left.

Kopitar, who had a goal and an assist Monday, became the fourth Los Angeles player to reach 1,000 career points on Sean Walker's empty-net goal.

“It's incredible for him,” Kings coach Todd McLellan said. “We're along for the ride. I'm certainly proud of him, but it's an to coach him. He's the kind of person who makes everyone around him better.”

Once in the West Division's fourth spot, the Coyotes dropped out of the race by losing 12 of 15.

“It sucks to lose,” Coyotes coach Rick Tocchet said. “We'll evaluate it at the end of the year what went wrong, what the expectations were and all that. I hate losing.”

The Kings won the first in the two-game series 3-2 behind 15 saves by Petersen after Jonathan Quick went out with a lower-body injury in the second period.

The Coyotes got off to a slow start in that game, but didn't have that problem Wednesday night. Ekman-Larsson scored 1:19 in on a wrist shot Petersen couldn't see through a screen.

Vilardi scored three minutes later from the right circle on a shot that hit Hill's glove and trickled in. Anderson-Dolan made it 2-1 later in the period on a shot from the slot Hill couldn't see through three teammates in front.

The Coyotes had a quick answer, scoring nine seconds into the power play when Chychrun punched in a rebound that got behind Petersen.

Both teams tightened up in their own end after the four-goal first period and both opened the third by hitting a post — the Kings' Mikey Anderson, then Arizona's Conor Garland.

Vilardi broke the tie 4 1/2 minutes in, one-timing a pass from Lias Andersson on a shot just outside the crease.

“We worked hard,” Tocchet said. “We had a few chances, they had their chances and scored some goals. We don't score and it's in our net. That's the story of our last six weeks.”

Petersen made some tough saves down the stretch and Kopitar hit the 1,000-point mark by winning a faceoff back to Walker to set up the empty-netter.

“I'm sure it's going to set in in the coming days and weeks," Kopitar said. "This one is a little different than 1,000 games where it kind of builds then happens. This one just kind of hits you.”

The 24-year-old played nine seasons in the Czech League with a 2.56 goals-against average and 77-84-0 record. Vejmelka is a two-time Extraliga Champion and a Silver Medalist at the U18 World Championships.

He played 35 games with HC Kometa Brno last season with a 2.79 goals against average and a .911 save percentage

Coyotes C Nick Schmaltz didn’t play for the second straight game after being struck in the head by a puck during warmups Monday night. ... Kings C Andreas Athanasiou had his first career NHL point on Anderson-Dolan’s goal. ... Arizona C Christian Dvorak played his 300th career game. ... McLellan said Quick was a little sore after leaving Monday's game and is day to day.

The Kings host the first of two games against Colorado on Friday.

The Coyotes play the first of two games at San Jose Friday.