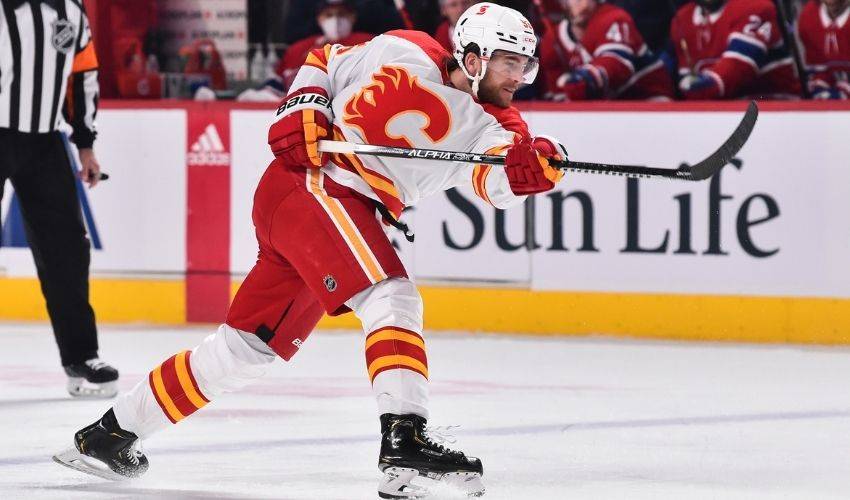 CALGARY — The Calgary Flames' playoff hopes were dented by the loss of defenceman Noah Hanifin to a season-ending shoulder injury.

The 24-year-old needs surgery. Hanifin was injured early in the first period of Saturday's game against the visiting Montreal Canadiens.

Flames head coach Darryl Sutter indicated, however, that Hanifin's shoulder had been an ongoing issue stemming from a game eight days earlier in Montreal.

"It's better to take care of it now and get ready for next year," Sutter said Monday.

Hanifin has four goals and 11 assists and was minus-two in 47 games this season. The six-foot-three, 215-pound defender averaged 20 minutes of ice time per game this season.

The Flames were four points back of the Canadiens, who held down the North Division's fourth and final playoff spot heading into Monday's game at Scotiabank Saddledome.

Montreal had a game in hand on Calgary.

Hanifin was injured five minutes after the opening faceoff Saturday. The Flames went on to defeat the Canadiens 5-2.

Hanifin was tangling with Canadiens forward Corey Perry along the boards near the Flames' bench when his left leg went out from underneath him. Hanifin's shoulder made contact with the ice as he went down.

"You don't replace that player," Sutter said. "It's not possible, but I think one of the reasons we are not in a playoff spot is there are three or four young defencemen who have not lived up to expectations this year.

"They have nine games to compete with each other and find out which one or two are able to take the next step."

Michael Stone is expected to play more minutes in Hanifin's absence. Nikita Nesterov drew into the lineup Monday ahead of Oliver Kylington.

Stone, 30, played his first game in 13 months March 27 after dealing with a blood clot in his arm. He has a goal and an assist in 12 games.

"I think we're fortunate to be able to get Michael back in the lineup," Sutter said.

"He's one of the reasons we are being able to stay alive here. He's stepped up and stepped in and his experience has been noticeable. I think it's helped whoever he's played with."