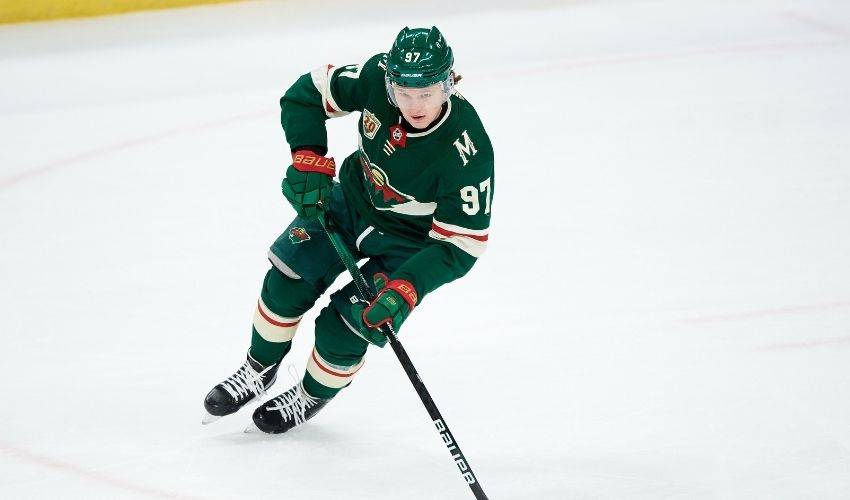 The Wild withstood a big initial flurry by Arizona and an early goal by Christian Dvorak in a tight-checking game. Kevin Fiala and Marcus Foligno each scored to put the Wild up, then Kiprizov deked Arizona goalie Darcy Kuemper out of the crease and scored on a wraparound.

“There was a lot of hype about him coming in and you never know for sure until you actually see a player how he's going to adjust, not only to the hockey, but everything off the ice, too,” Wild Nico Sturm said. “It's undeniable he's taken this team to the next level with his play.”

Talbot was solid all night, making some big saves down the stretch, and Sturm added an empty-net goal. Minnesota has a 16-point cushion over the Coyotes for third in the West Division.

“It's the best time of the year,” Talbot said. “This is where you have to start building for the playoffs, ramping up your game and making sure you're tightening up the little areas you need to tighten up because the playoffs are a different animal.”

The Coyotes dominated early and had a season-high shots with 40, but couldn't get anything else past Talbot after Dvorak's goal in losing for the seventh time in eight games. Kuemper stopped 18 shots for Arizona, which has a one-point lead over St. Louis for the West Division's final playoff spot.

“We had some good chances, we hit some posts,” Coyotes coach Rick Tocchet said. “We deserved a better fate, but these were the game results.”

The Coyotes were in good playoff position less than a month ago, before six losses in five games allowed St. Louis to catch them.

Arizona missed an opportunity to build on its one-point lead over the Blues on Monday, losing 5-2 to the Wild.

The Coyotes swarmed the Wild early in Wednesday's game, firing 11 of the first 12 shots. Dvorak scored at the end of a power-play flurry midway through the first period, banking in a rebound off the back of Talbot's leg.

“I wasn't happy with the goal — you never want to let in a goal that goes in off you,” Talbot said. “I just tried to stay focused, stop the next one and we'd battle back like we always do.”

Arizona kept up the pressure, but couldn't get anything past Talbot. Dryden Hunt also had a shot that hit the crossbar and post.

Fiala tied it early in the second period, one-timing a pass from Sturm on a 2-on-1. Foligno opened the third period by getting a puck under Kuemper on a short breakaway.

Arizona turned up the pressure again late, but Kirprizov and Sturm put it out of reach.

“We have to be happy with shot total, but at some point, it’s got to go in for us,” Hunt said. "I thought for the most part it was a pretty solid game with just a few lapses. Puck luck didn’t go our way.”

The Wild won seven of eight games against Arizona, outscoring the Coyotes 32-12. Their only loss was 5-2 at Gila River Arena on March 6.

Coyotes F Conor Garland did not play after suffering a lower-body injury in practice. ... The Wild have three win streaks of five or more games, matching the 2011-12 and 2014-15 teams for most in franchise history. ... Arizona F Tyler Pitlick missed his second straight game with a lower-body injury. ... Kiprizov also extended his team rookie record with his 38th point.

Minnesota plays at the Los Angeles Kings on Friday.

Arizona kicks off a three-game trip Saturday against the Kings.