Twenty-two Canucks players and four members of the coaching staff have tested positive for COVID-19 since March 30. 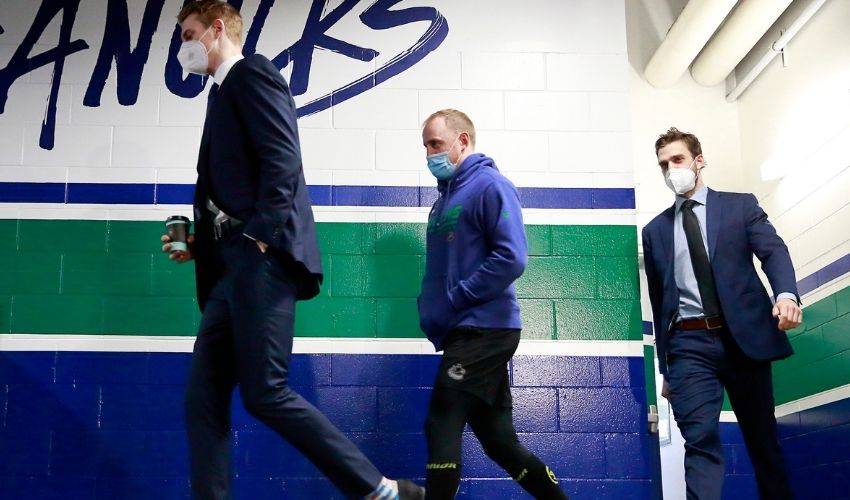 VANCOUVER — For forward Tanner Pearson, the severity of the COVID-19 outbreak sweeping through the Vancouver Canucks hit home as his teammates' loved ones began to fall ill.

Players knew there was a risk they'd pick up this virus this season, he said. What they didn't expect was to see their partners and children get sick.

“That’s when it really, really started to suck," said Pearson, who has remained off the NHL's COVID-19 protocol list throughout the outbreak.

"I think guys were pretty confident in themselves to get over it, but when it starts hitting wives and kids and pregnant wives, that’s when it really becomes more than hockey. That’s when it scares you a bit.”

Twenty-two Canucks players and four members of the coaching staff have tested positive for COVID-19 since March 30. One additional player has been deemed a close contact.

The team has said a variant of the virus is involved and genomic sequencing is being done to determine which specific variant.

Eight Canucks games were postponed between March 31 and April 14.

The outbreak has begun to wane in recent days, with defenceman Travis Hamonic being removed from the NHL's COVID-19 protocol list on Monday. Eighteen Canucks players remain on the list.

A player on the protocol list has not necessarily tested positive. Players who are in self-isolation after travelling or who've been in close contact with someone who tested positive, for example, are also on the list.

The list does not include team staff or players not on the active roster, including those on the taxi squad.

The league allowed Vancouver to reopen its facilities Monday and general manager Jim Benning said 10 players took advantage of the opportunity to get back on the ice.

“Some guys feel really good and they’re ready to go. Other guys are still feeling some residual effects of the COVID," he said.

Coach Travis Green is "feeling better every day," Benning added. "Hopefully he’s ready to go too as we get going.”

The Canucks are set to host the Edmonton Oilers on Friday. It will be Vancouver's first game since March 24.

It's been even longer since Pearson played. The 28-year-old left-winger has been out of the lineup since injuring his leg in a bout with the Ottawa Senators on March 17.

Pearson said Monday that he's returned to skating and is feeling better.

“I’m excited to hopefully play again soon, to see the guys, not just through a group text or whatnot," he said. "I want to play. It’s way better to sit in an apartment all day and waiting to get the OK.”

Vancouver faces a gruelling end to the season with 19 games in 30 days, including six sets of back-to-backs.

“It’s not going to be easy but in this season with all the things you’ve got to deal with COVID and stuff, it is what it is," Benning said.

Some new faces will bolster the Canucks lineup during the final stretch.

Benning dealt forward Adam Gaudette — the first player to test positive for COVID-19 during the outbreak — to the Chicago Blackhawks ahead of the NHL's trade deadline Monday. In exchange, Vancouver received centre Matthew Highmore.

The GM said the Canucks had expected Gaudette to take another step this season, but hadn't seen the desired amount of progress.

Vancouver also made some changes on the blue-line, dealing veteran defenceman Jordie Benn to the Winnipeg Jets for a sixth-round pick in this year's draft and acquiring defenceman Madison Bowey from Chicago.

The Canucks also swapped their fourth-round pick in this year's draft for the Blackhawks' fifth rounder.

Benning believes the Canucks will have a full team ready to play come Friday.

“First and foremost, it’s about getting healthy, getting back on the ice, getting back in game shape. Once we start playing games, we play a lot of games in a short period of time," he said.

“I’m hoping we can win our share of games here so that we can make it competitive going down the stretch.”

This report by The Canadian Press was first published April 12, 2021.