Nick Foligno vividly recalls walking home from Maple Leaf Gardens with his family one memorable night in the spring of 1993. 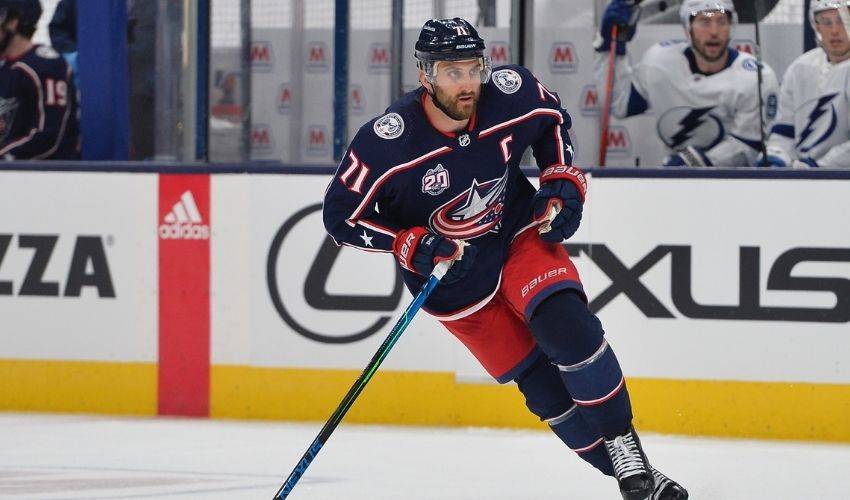 TORONTO — Nick Foligno vividly recalls walking home from Maple Leaf Gardens with his family one memorable night in the spring of 1993.

His dad, Mike Foligno, was a winger on the team that upset the Detroit Red Wings in the first round of the playoffs, and Toronto had just knocked off the St. Louis Blues in Game 7 to move onto the conference final.

"The parade atmosphere that the fans gave," Nick Foligno said of his recollections nearly 28 years later. "That just stuck with me to this day, how passionate Leafs fans are.

With any luck, the younger Foligno will get a chance to experience something similar with Toronto in a few months after the club acquired the veteran forward from the Columbus Blue Jackets on Sunday in a three-team deal.

"I'm a guy that plays off my gut, my heart," Foligno said. "And my heart was telling me this was the right move, so I went with it … it just felt right.

"I'm really looking forward to just getting there and getting acquainted with everything and then hitting the ground running and helping any way I can."

Columbus secured Toronto's first-round pick in the 2021 NHL draft and fourth-round selection in 2022 as part of the swap, while the San Jose Sharks get the Leafs' fourth rounder in 2021. The Blue Jackets will retain 50 per cent of Foligno's contract, while the Sharks earned a pick for eating the other half of his US$5.5-million salary cap hit. Toronto also got minor-league forward Stefan Noesen as another depth option from San Jose in the deal.

The move by Leafs general manager Kyle Dubas — he improved the roster without sacrificing talented youngsters Rasmus Sandin or Nick Robertson — ahead of the NHL's Monday afternoon trade deadline is a clear indication he believes the group currently sitting atop the North Division standings is ready to go for it in 2021.

The Blue Jackets eliminated a bitterly disappointed Toronto from the qualifying round of the league's post-season bubble in a hard-fought five-game series last summer, but Foligno said there was a lot to like about a young, talented roster trying to find its way.

"They were a team that learned a lot about themselves," said the 33-year-old pending unrestricted free agent. "I just felt it was a fit for me just in the sense of just what I can bring."

The six-foot, 211-pound Foligno had seven goals and 16 points in 42 games with Columbus this season as the Blue Jackets struggled to gain traction after going toe-to-toe with the Stanley Cup champion Tampa Lightning in the first round of the 2020 playoffs.

"Thing just didn't quite fall into place," he said. "We had a lot of turbulence."

Toronto, meanwhile, beefed up its grit and leadership in the fall after that loss to Columbus by signing Joe Thornton, Wayne Simmonds and Zach Bogosian in free agency.

Foligno is a player cut from similar cloth in many respects.

"Both Kyle and (head coach Sheldon Keefe) have reached out," he said. "They're just excited about the opportunity to get to work. That's all we're trying to do. You can tell how focused that group is on trying to win and the task at hand.

"It lines up mentally with where I'm at and what I feel is necessary to win hockey games."

Toronto made another move late Sunday, acquiring goalie David Rittich from Calgary — the Flames retained 50 per cent of the pending UFA's US$2.75-million salary — for a third-round pick in 2022. The trade adds to the Leafs' depth with Jack Campbell, who's 11-0-0 this season, currently the team's No. 1 crease option as Frederik Andersen continues to nurse a lower-body injury that's kept him out of the lineup since March 19.

Foligno, who played alongside Leafs forward Jason Spezza with the Ottawa Senators and Toronto star Auston Matthews at the 2016 world championships for the U.S. national team, will have another familiar face in the mix when he gets into the locker room after the team also acquired centre Riley Nash from Columbus on Friday.

Named the sixth captain in Blue Jackets history in May 2015, Foligno has nine goals and 22 points in 51 playoff contests.

The Buffalo, N.Y., native, who was selected 28th overall by Ottawa in 2006 and spends summers with his young family in Sudbury, Ont., will have to quarantine for seven days once he arrives in Canada before joining his new team.

Foligno said his wife and three children will remain in Columbus because of the skyrocketing COVID-19 situation in Ontario.

"The hardest part of this for me is just not being able to have them there," he said. "They also understand daddy's going there to do a job.

"I'm going to go and do the best I can and try to help them and bring a Cup home."

Blue Jackets general manager Jarmo Kekalainen paid tribute to his now-former player — originally acquired from Ottawa for defenceman Marc Methot in 2012 — once the deal was announced.

"Nick Foligno has been everything you'd want in a captain, in a representative of your team and ambassador for your community. His contributions to the Blue Jackets franchise and the impact he and his family have had off the ice is immeasurable," Kekalainen said in a statement. "Given where we are right now, this move made sense for us as an organization and for Nick."

Foligno has 203 goals and 482 points in 950 career regular-season games with Columbus and Ottawa. He will wear his father's old No. 71 in Toronto, but is unlikely to mimic the family patriarch's leaping celebration when he puts the puck in the net.

He's also hoping for a better end result should the Leafs — a franchise that's failed to win a playoff series since 2004 — start stringing together some victories in May and June.

"I'm not a big fan of Kerry Fraser," Foligno joked in reference to the referee's infamous non-call on a Wayne Gretzky high-stick many Toronto fans still contend cost the Leafs the 1993 conference final against the Los Angeles Kings and a Stanley Cup showdown with the Montreal Canadiens. "I'll never forget that run. It's something my dad talks about to this day. It's kind of ingrained into that city.

"I'm looking forward to going on another one."

This report by The Canadian Press was first published April 11, 2021.