Sabres fire coach Krueger while in midst of 12-game skid

The Sabres are starting fresh yet again with Krueger becoming Buffalo’s sixth coach fired in just over eight calendar years. 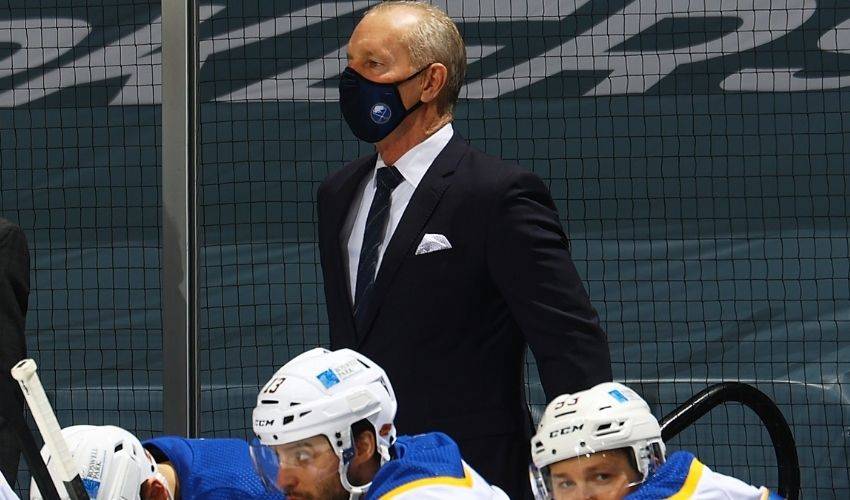 BUFFALO, N.Y. — Firing Buffalo Sabres coach Ralph Krueger on Wednesday represents just the beginning of what could become Kevyn Adams’ major overhaul of an overpriced, underperforming team in the midst of a 12-game skid.

In laying only part of the blame on Krueger, the first-year general manager openly challenged his players’ accountability and pride, while suggesting changes to the roster are looming.

“We’re open to anything and everything,” Adams said, when asked whether he’d consider moving forward Taylor Hall, who is completing a one-year, $8 million contract. Adams said he's been in discussions with numerous teams leading up to the NHL's trade deadline on April 12.

“This is my job to make sure not only that I’m proactive but listening, as well doing everything I can to move this thing forward,” he said.

The Sabres are starting fresh yet again with Krueger becoming Buffalo’s sixth coach fired in just over eight calendar years. Krueger failed to make it through the second season of his three-year contract.

He was fired a day after Buffalo’s winless streak grew to 0-10-2 following a 3-2 loss at New Jersey, and against a Devils team that snapped an 11-game home skid. Buffalo has been outscored by a combined 49-19 (not including a goal allowed in a shootout loss) in matching the third-longest winless streak in franchise history.

At 6-18-4, the Sabres have as many wins as times they’ve been shut out, rank last in the league in victories, points and goals scored, and are in jeopardy of extending their playoff drought to an NHL record-matching 10th season.

“This is about results that haven’t been good enough,” Adams said. “This is about how do we improve. I believe every crisis is an opportunity for change. And this is a chance for us to move forward and begin to get this thing pointed in the right direction.”

Adams’ decision comes two weeks after announcing he was evaluating the entire operation. After attempting to hold off dismissing the coach until the end of the season, Adams was left with little choice especially following a sloppy 6-0 loss to Washington on Monday.

Adams characterized the team’s performance “not good enough,” and said he will stress a message of accountability when meeting with his players on Thursday.

“I don’t care where we are in the standings right now. If we do not show up at the rink tomorrow and for the rest of the season having that characteristic about our team, it’s going to be unacceptable,” he said. “There has to be pride that goes with putting on a Buffalo Sabres’ jersey.”

The Sabres have lurched from one crisis to another this season.

Injuries to key players have been a factor. Captain Jack Eichel hasn’t been healthy all season and is out indefinitely with an upper body injury. The Sabres also endured a two-week COVID-19-forced pause, leading to the team having to squeeze in its final 46 games over an 83-day stretch, while challenged to compete in a reformatted and ultra-competitive East Division.

Krueger attempted to remain upbeat as the losses mounted.

“All I can say is I continue to enjoy doing this job also in a difficult time,” Krueger said, following the loss at New Jersey. “It’s easy to stand here when things are going well. It’s not that easy to stand here right now in this adversity. But I know we are we are learning and growing as an organization and we will take strength out of this in the future.”

Brandon Montour acknowledged the team was bracing for changes.

“I think guys expect something just to get out of this in any way possible," Montour said.

Krueger was questioned for constantly fiddling with his lines, and for benching Jeff Skinner for a three-game stretch last month.

Ultimately, the lack of and a regular series of defensive breakdowns placed the focus on whether Krueger’s philosophy was outdated, too easy to counter, didn’t fit the players on the roster or a combination of all three.

The 61-year-old Krueger was praised for having a reputation of being an innovator and motivator despite being out of hockey for five seasons while overseeing Premier League soccer club Southampton.

On the ice, he was a long-time coach of the Swiss national team and served as a consultant for Canada's gold-medal-winning team at the 2014 Sochi Olympics. He took time out from soccer in 2016 to coach Team Europe to a second-place finish at the World Cup of Hockey.

At the NHL level, Krueger spent two seasons as an assistant coach in Edmonton before taking over as the Oilers head coach in 2012-13. He was fired immediately following the lockout-shortened 48-game season.

Krueger now has the distinction of never completing a full 82-game NHL campaign. His first season in Buffalo was cut short by the pandemic. With a 30-31-8 record when the season was paused in mid-March, the Sabres finished a percentage point behind Montreal, which clinched the Eastern Conference’s 12th and final playoff berth.

This story has been corrected to identify fired assistant coach as Steve Smith.