Alex Ovechkin matched Phil Esposito for sixth on the NHL list with his 717th goal, and the Washington Capitals beat the Buffalo Sabres 6-0. 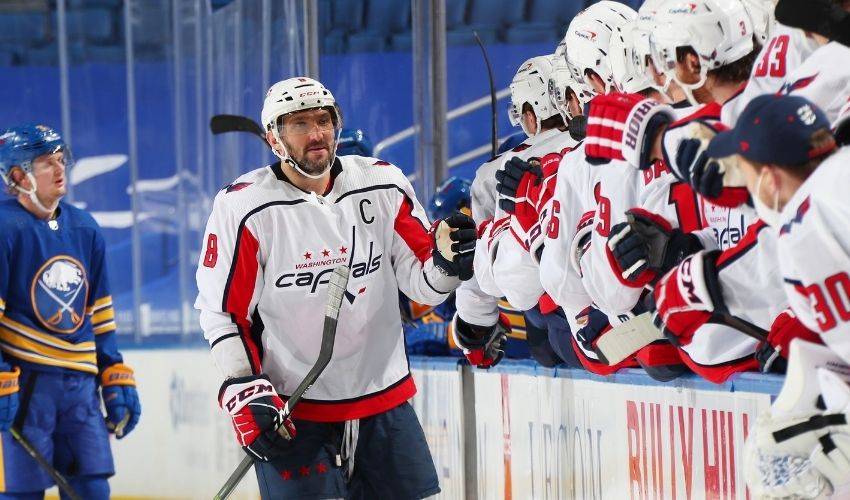 BUFFALO, N.Y. — Alex Ovechkin matched Phil Esposito for sixth on the NHL list with his 717th goal, and the Washington Capitals beat the Buffalo Sabres 6-0 on Monday night.

Ovechkin scored in the third period, helping send the Capitals to their fifth straight win with his 1,299th career point — one shy of becoming the 35th player to reach 1,300.

He scored from the slot off a pass from former Sabre Conor Sheary, who found Ovechkin cutting toward the net. Ovechkin snapped a quick shot past Carter Hutton, who was screened.

Hutton made 24 saves for Buffalo, which is 0-9-2 in its past 11 games, the third-longest skid in team history.

PITTSBURGH (AP) — Evgeni Malkin scored on a power play for his 1,100th career point, leading Pittsburgh to the victory.

Malkin is the third Russian-born player to reach 1,100 points in the NHL, joining Alex Ovechkin and Sergei Fedorov. Malkin has eight goals on the season and also had an assist while extending his point streak to eight games.

Matt Grzelcyk scored a power-play goal for the Bruins, who have four wins in their last 13 games. Jaroslav Halak made 22 saves in his fourth straight start.

Claude Giroux, Joel Farabee and Ivan Provorov each had a goal and an assist, and James van Riemsdyk also scored for the Flyers, who won for the third time in eight games. Voracek also had two assists, and Carter Hart finished with 20 saves.

Barkov poked in a loose puck from right in front with 6:34 left. It was the Panthers’ first short-handed goal this season.

Patrick Kane, Philipp Kurashev and Brandon Hagel scored for the Blackhawks, who lost for the fourth time in five games. Kevin Lankinen made 30 saves.

TAMPA, Fla. (AP) — Calle Jarnkrok had a short-handed goal and three assists, helping the Predators to the road win.

Pekka Rinne stopped 38 shots and picked up his 14th career assist in Nashville’s first victory against Tampa Bay in six meetings on the season. Mattias Ekholm had a goal and an assist, and Eeli Tolvanen and Viktor Arvidsson also scored.

The Predators won for the second time in the past eight games.

Steven Stamkos scored for Tampa Bay, which lost for the second time on home ice this season in 12 games. Curtis McElhinney fell to 2-3-1 on the season after stopping 22 shots.

LAS VEGAS (AP) — Max Pacioretty and Mark Stone each had a goal and an assist to help Vegas beat San Jose.

Marc-Andre Fleury, making his 16th start in 17 games, finished with 23 saves to improve to 14-5-0 this season. Fleury earned his 481st career win, inching closer to Ed Belfour, who ranks fourth with 484.

Pacioretty scored in the first period and delivered a perfect backhand pass early in the third to Stone, who one-timed a wrist shot to make it 2-0. It ended up being Stone’s sixth game-winning goal.

The Golden Knights are 12-1-3 in 16 regular-season meetings with San Jose.

CALGARY, Alberta (AP) — Elias Lindholm, Dillon Dube and Andrew Mangiapane each had a goal and an assist, and Calgary earned its third straight win under new coach Darryl Sutter.

WINNIPEG, Manitoba (AP) — Tyler Toffoli had two goals for Montreal, including an empty-netter in the final minute.

Jesperi Kotkaniemi and Josh Anderson also scored for the Canadiens. Carey Price, playing in his 700th game, made 34 saves.

Montreal had dropped three of four.

Winnipeg pulled goalie Connor Hellebuyck for an extra attacker with about two minutes left, but Toffoli put the game away at 19:12.

Miller got his eighth of the season at 1:40. Jayce Hawryluk and Tanner Pearson scored in regulation for Vancouver.