Kaapo Kahkonen made 26 saves to notch his first career shutout for the Minnesota Wild. 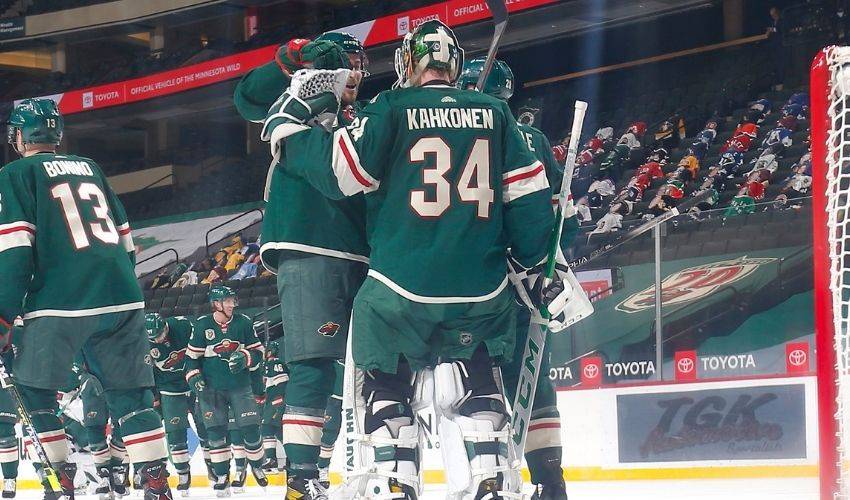 ST. PAUL, Minn. — Kaapo Kahkonen made 26 saves to notch his first career shutout for the Minnesota Wild in a 2-0 victory over Vegas on Monday night to stop the NHL-leading Golden Knights' six-game winning streak.

Kahkonen won his seventh consecutive start, extending his franchise rookie goalie record and improving to 10-4 in his debut season. The 24-year-old native of Finland has allowed only 10 goals over his seven-game streak.

Kevin Fiala scored his team-lead-tying eighth goal of the season in the first period, the only blemish against Golden Knights star Marc-Andre Fleury, who stopped 19 shots for the team with the best points percentage in the league nearly halfway through this pandemic-shortened schedule.

Jonas Brodin was awarded a goal for the Wild after being slashed from behind with 6 seconds left as he approached the empty net.

Vegas, which had 19 goals over its previous four games, had not scored fewer than two in almost a month. The Wild caught a break when the Golden Knights scratched two of their best players because of unspecified injuries, captain and right wing Mark Stone and Alex Pietrangelo. Stone entered the evening seventh in the NHL with 21 assists, one of the key cogs in a deep collection of forward lines on a team that ranked fifth in goals per game as the week began.

Fleury, who posted his fourth shutout of the season on Saturday at San Jose, did all he could to keep the Golden Knights close as they hit the halfway point of a six-game, nine-day road trip. Coach Pete DeBoer predicted in the morning this would be the most difficult of these contests considering the Wild were outscored 10-5 over two losses — one in overtime — in Las Vegas last week.

The Golden Knights started rather slowly and a bit sloppily, and a giveaway in their attacking zone set the Wild up for an early lead. Victor Rask snagged the puck, pivoted and passed it to send Fiala the other way on a two-on-one rush with Zach Parise. Fiala used Parise as a decoy and swooped in to snap a wrist shot over Fleury's shoulder midway through the first period.

Stone won NHL's first star award for his performance last week, with two goals and eight assists in four games. That included a career-high five assists against Minnesota on March 1. Stone entered the game tied for fourth in the league with a plus-14 rating.

After the rematch here on Wednesday, the Golden Knights travel to St. Louis to play the Blues on Friday and Saturday. The Wild stay home for three straight games against the Arizona Coyotes, on Friday, Sunday and March 16.