From his first NHL goal all the way to No. 400 on Sunday night, Patrick Kane has loved hockey all along. 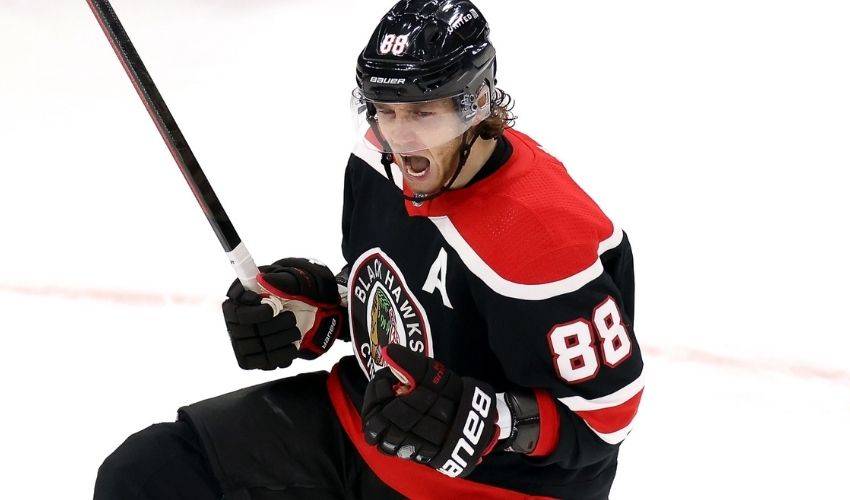 CHICAGO — From his first NHL goal all the way to No. 400 on Sunday night, Patrick Kane has loved hockey all along. Loved playing, watching and talking about his sport.

The biggest difference is the world around him, from his longtime girlfriend, Amanda, and infant son, Patrick Timothy Kane III, at home, to his mostly new cast of teammates at the rink, some of which grew up watching the high-scoring winger become one of the league's biggest stars with the Chicago Blackhawks.

It looks as if the changes are working quite well, too.

Led by Kane, still as dynamic as ever at age 32, the surprising Blackhawks head into a challenging stretch of their schedule with some momentum after a 9-3-1 February. Next up is a three-game series at home against Tampa Bay, which outscored Chicago 10-3 while sweeping the first two games of the season.

“You just want to keep getting better and keep trying to help the team as best you can,” Kane said, “and for me, that's getting the puck as much as possible and creating plays and try to create to create some scoring chances, so try to just keep improving on that."

It's going to be quite difficult for Kane to improve on his recent production.

The three-time Stanley Cup champion has eight goals and 19 assists in his past 15 games, inserting himself into the conversation for a second Hart Trophy for NHL MVP. He is tied with Alex DeBrincat for the team lead with 11 goals, and tops the Blackhawks with 23 assists and 34 points.

“It's amazing the career he's already had,” teammate Ryan Carpenter said. “It's nice to have that kind of veteran leadership, too. He just goes out there and leads by example. He comes to play every night.”

Kane's considerable skills were on full display during Sunday night's 7-2 victory over Detroit. He made a nice drop pass to set up rookie Puis Suter's seventh goal early in the third period, and added another assist on DeBrincat's 11th of the season with 4:37 left.

In between, he netted another milestone goal.

Midway through the third, Kane and DeBrincat got loose for a 2-on-1 break. Kane kept the puck, waited for sprawled Detroit Filip Hronek to slide by him and then beat Thomas Greiss on the stick side for No. 400 in his 996th regular-season game.

“When I was getting towards the top of the circles, I could see that (Hronek) was going to try and slide,” Kane said. “So just slow it up and try to make a move and hit my spot with my shot. Nice to see it go in.”

Playing in a mostly empty United Center because of COVID-19 protocols, Kane became the 100th NHL player to reach 400 goals and the fourth member of the Blackhawks' club, joining Hall of Famers Bobby Hull and Stan Mikita and longtime star Steve Larmer.

Not long after Chicago's third win in four games, Kane looked forward to sharing the moment with Amanda and their son — assuredly a much different celebration than the one after his first goal way back on Oct. 19, 2007, against Colorado.

“With Patty Boy in my life now, it's just, it'll be fun to go home tonight. He'll probably be sleeping, but tomorrow, just kind of see him,” Kane said. “It puts life in perspective, too. Especially after a long road trip, to come back and see him and it's so amazing how he can just smile and make you so happy.”

While acknowledging 400 goals and his upcoming 1,000th game means he has been around “for a while,” Kane brushed off any talk about how long he might play. He said he is still learning about the game in his 14th season, especially in his interactions with some of the team's youngest players.

“There's a lot of things that they do in their games that I can see what works and try to improve on my game, too,” Kane said. “So I think it's a good group right now for sure.”

Jay Cohen can be reached at https://twitter.com/jcohenap