Alexis Lafrenière isn't going back to play junior hockey in Quebec, and the Rangers hope he's on the ice in New York sooner than later. 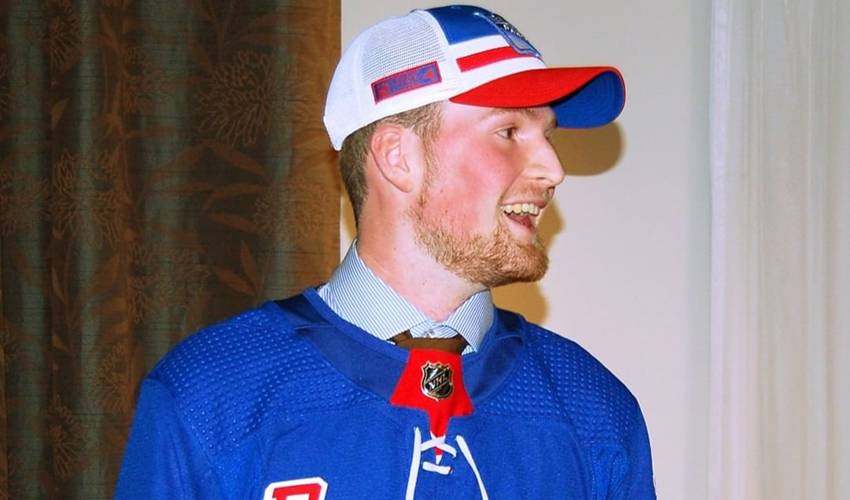 Alexis Lafrenière isn't going back to play junior hockey in Quebec, and the Rangers hope he's on the ice in New York sooner than later.

The Rangers agreed to terms Monday with the No. 1 draft pick on his three-year, entry-level contract that includes the lucrative bonuses typical for a player selected in that spot. Lafrenière as expected won't return to Rimouski Oceanic of the Quebec Major Junior Hockey League, which has started its season, and general manager Jeff Gorton hopes to get him to the New York area by early November to begin training for next season.

"We’re really excited about getting him signed," Gorton said. “Looking forward to the first time we can actually see him on the ice."

The Quebec-born left winger is expected to play right away in the NHL, which is targeting a Jan. 1 start for the 2021 season. Lafrenière joins a budding young core that includes MVP finalist Artemi Panarin, top Mika Zibanejad, Adam Fox and Anthony DeAngelo and goaltender of the present and future Igor Shesterkin.

New York signed Panarin to a big-money, long-term contract July 1, 2019, and doesn't need to spend like that now after winning the draft lottery and stockpiling so much talent. The future may not be now, but it's not far off.

“Keep in mind the big picture,” Rangers president John Davidson said. "We want to play well this season, whenever the season is — whenever it starts and wherever it starts, we don’t have any idea. When you manage a hockey club, we have to think of today, tomorrow and the future and we like some of the pieces that we have that are going to put us into that position.”

Lafrenière agreed to a contract a day after turning 19 and less than a week since going first overall. He's coming off a season in which he put up 35 goals and 77 assists for 112 points with Rimouski and was the MVP of the world junior hockey championship for getting 10 points in five games and leading Canada to the gold medal.

The Rangers are hoping for more of that kind of production eventually from their first No. 1 pick since the universal draft was implemented in 1969. They also made a handful of free agent signings since the market opened Friday to improve, especially on .

They signed Jack Johnson to a $1.15 million, one-year deal after he was bought out by Pittsburgh and added fellow Anthony Bitetto, a Long Island native. Johnson won't totally fill the veteran blue line void off Broadway, but he's a stopgap and a bridge to several young prospects who may not be quite ready for the NHL.

“He’s going to help us,” Davidson said. “He’s a big body, he boxes people out, he’s good along the boards. He’s not offensive-minded by any means, but he’s going to help us as we move along here and try to become a better team down the road.”

New York also signed veteran Keith Kinkaid to be its third goaltender behind Shesterkin and Alexandar Georgiev after buying out Henrik Lundqvist, who joined the rival Washington Capitals.

“We see teams all around the league, goaltending depth has become a major asset and an issue, really,” Gorton said. “We like Keith and we’ve watched his career over the years, and we think he’s somebody that is a capable NHL guy that we felt like it was the right time to bring him into the organization.”

Davidson, who tended goal for the Rangers back in the day and watched franchise legend Eddie Giacomin return to face New York with Detroit after being waved, isn't concerned about Lundqvist staying in the same division because the team and 38-year-old were each ready to move on.

"It’s an ideal situation," Davidson said of Lundqvist going to Washington. “This is us trying to look to the future. We had to do what we did.”

There's no bigger symbol of the Rangers' future than Lafrenière, who will get help from the organization finding housing. Davidson said Lafrenière is welcome at his house — which would mimic Sidney Crosby living with Pittsburgh Penguins co-owner Mario Lemieux early in his pro career — and several other players have offered taking the prospect in.

“We’ll find the best-case scenario for him,” Gorton said. “We do have a number of people that have reached out, and there’s no shortage of people that we think can help and put him in the right spot.”