Buffalo Sabres owners Terry and Kim Pegula reversed course by firing general manager Jason Botterill on Tuesday as part of a drastic cost-cutting purge of front-office staff and scouts on a team preparing to sit idle for what could be the remainder of the calendar year. 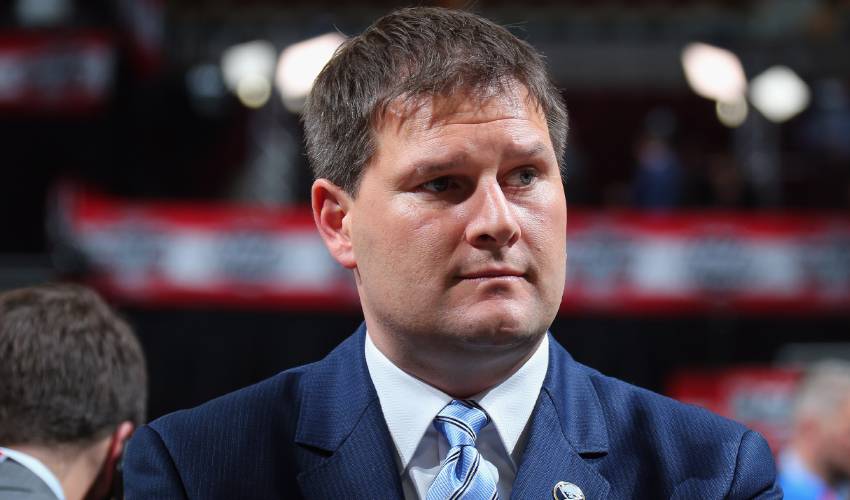 BUFFALO, N.Y. — Buffalo Sabres owners Terry and Kim Pegula reversed course by firing general manager Jason Botterill on Tuesday as part of a drastic cost-cutting purge of front-office staff and scouts on a team preparing to sit idle for what could be the remainder of the calendar year.

The Pegulas cited a lack of communication and philosophical differences in announcing the decision to fire Botterill, three weeks after saying the GM would be retained.

What also became clear during a Zoom conference call with the owners was their sudden focus on keeping costs in line, with Terry Pegula twice mentioning a need to have an effectively, efficiently and economically run franchise, while adding: “We're going to get leaner.”

"We need to make some adjustments in the business side of our operations,” Terry Pegula said, referring to the coronavirus pandemic which ended the Sabres season in March. Buffalo failed to qualify for the NHL's proposed 24-team expanded playoff format, meaning the team will be off until the start of the next season, which could be pushed back to January.

“We need to make adjustments in the business side of our operations that we provide that foresight to the operation. And we felt like we weren't being heard," he added. “I'm not going to sit here and dish on Jason Botterill, but we have a vision and we want to see our vision succeed.”

The Sabres stayed in-house in replacing Botterill by promoting of business operations Kevyn Adams, a former player who has no previous GM experience. Adams has spent the past nine years serving in various capacities with the Sabres, ranging from player development to assistant coach before making the jump to the business side.

Later in the day, the Sabres announced the firing of minor-league coach Chris Taylor and his assistants, Gord Dineen and Toby Petersen.

And a person with direct knowledge of the decisions told The AP that 12 members of the team's 21-member scouting staff, including assistant director of amateur scouting Jeff Crisp, were also let go. The person spoke on the condition of anonymity because the moves were not announced.

Coach Ralph Krueger was spared from the purge which essentially gutted most of the team's hockey staff at a time when Kim Pegula has said she is attempting the streamline the small-market franchise's operations in staying on as president. The cuts began with the team's parent company, Pegula Sports and Entertainment, in April, when 104 employees were furloughed and another 21 laid off.

The cost-cutting moves are a major shift for the Pegulas, who rapidly expanded the Sabres staff and spent hundreds of millions of dollars on signing players and upgrading team facilities upon purchasing the franchise in February 2011. Terry Pegula, who went on to purchase the NFL Buffalo Bills in 2014, made his fortune by selling his Marcellus Shale natural gas drilling rights for $4.7 billion to Royal Dutch Shell in 2010.

Pegula, who still maintains numerous natural gas rights, denied he was experiencing financial difficulties while acknowledging the oil and gas industry is slumping.

“We don't have any debt on our oil and gas business,” he said. “We need to do better moving forward in the sports business, like every team's going to have to do because if we don't have any fans in the seats next year, what are your economics in the world of sports?”

The Sabres' bottom line all but overshadowed the on-ice woes of a team that's in the midst of a nine-year playoff drought, which marks the NHL's longest active streak and one short of matching the league record.

The flip flop on Botterill comes at a time the Pegulas have been criticized for mismanaging a franchise now on its sixth coach and fourth GM since the 2012-13 season.

Kim Pegula said the change of heart regarding Botterill’s status stemmed in part with the NHL draft being pushed back to the fall, which will provide Adams more of an opportunity to establish himself in his new role.

Botterill, who completed his third season as GM, did not respond to a text message seeking comment.

During a season-ending Zoom conference call last month, Botterill said the criticism that came with missing the playoffs wouldn’t alter his vision of continuing to build the organizational depth and developing young talent.

“There’s always urgency in this position, and I’m not surprised that our passionate fans want to see a winner on the ice,” he said.

Adams grew up a Sabres fan in suburban Buffalo and wore No. 11 because of his love of Hall of Famer Gilbert Perreault.

He won a Stanley Cup with the 2006 Carolina Hurricanes during his nine-plus-year NHL career, and briefly worked as an agent following his retirement before being hired by the Sabres.

Adams faces a considerable challenge in shaping a roster that lacks secondary scoring and could face a salary-cap crunch with numerous players eligible to become restricted and unrestricted free agents this . He also stands to prepare for a draft with a new scouting staff.

“I believe that winning is doing it together,” Adams said of his collaborative approach. “We’re going to be positive. And I’m really looking forward to what lies ahead.”

Botterill was under fire for mismanaging the lineup with numerous questionable moves, while attempting to rebuild the roster through youth.

His missteps started with his first coaching hire of Phil Housley, who was fired two seasons into his tenure. He also traded unhappy Ryan O’Reilly to the St. Louis Blues in July 2018. O’Reilly led the Blues to the Stanley Cup in 2019 and won the Conn Smythe Trophy as the playoff MVP.

Player defections were a considerable problem with Zach Bogosian and Patrik Berglund both having their contracts terminated for refusing to play.