The Columbus Blue Jackets signed goaltender Elvis Merzlikins to a two-year, $8 million contract Thursday, putting him in competition with the freshly signed Joonas Korpisalo for the starting job. 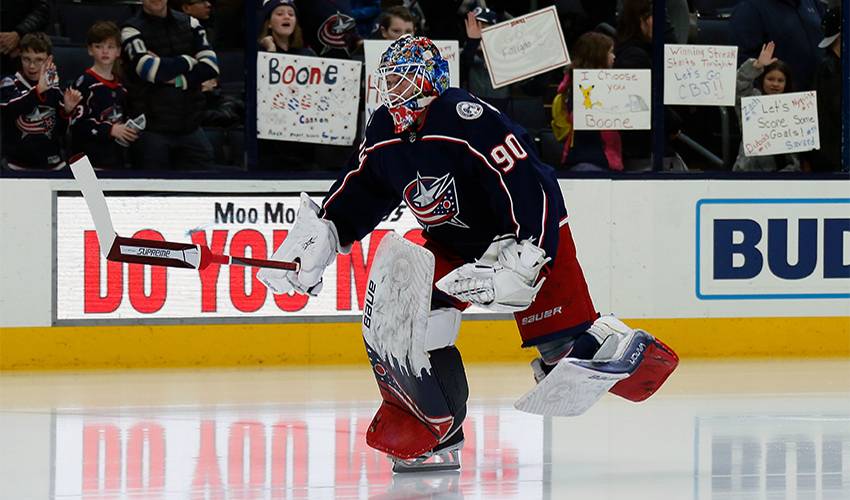 COLUMBUS, Ohio — The Columbus Blue Jackets signed goaltender Elvis Merzlikins to a two-year, $8 million contract Thursday, putting him in competition with the freshly signed Joonas Korpisalo for the starting job.

The 26-year-old Latvian became a fan while successfully filling in for an injured Korpisalo in the second half of the season. Merzlikins (pronounced Merz-LEEK-uhns) was set to be restricted free agent with arbitration rights after the 2019-20 season.

The team announced Merzlikin's signing a week after tying up Korpisalo with a two-year contract worth a reported $5.6 million.

The signing gives the Blue Jackets the option of holding onto the proven tandem or dealing one of them at some point for some sorely needed offensive help.

“Who plays is going up to the head coach," general manager Jarmo Kekalainen said Wednesday on a conference call with reporters. “We have two really good goaltenders under contract for the next two years. The tandem worked well this year, was a big part of our success. We believe it's going to be a big part of our success moving into the future as well.”

He had a rough start in the NHL this season, mostly sitting on the bench while Korpisalo played well enough in the first half to be chosen for the NHL All-Star Game. Then Korpisalo went out with a knee injury on Dec. 29 and Merzlikins was thrust into the starting job.

He proceeded to win his first eight games, including five shutouts. When the season was halted last month, he was tied for second among NHL goalies in shutouts and fifth in goals-against average and save percentage, leading all rookie netminders in those categories.

“I'm really excited and I'm really happy because I like everything here,” Merzlikins said. “I like the city, I really love my teammates and I like the organization, especially the fans. When I came here in (last) summer, I felt like (I was) already home.”

Korpisalo, who got his chance to be the starter after the free-agent departure of star Sergei Bobrovsky, said he also wants to stay in Columbus, where he has played since beginning his NHL career in 2015-16.

The Blue Jackets held the second Eastern Conference wildcard playoff spot when the season was paused March 12 because of the coronavirus pandemic. It's not clear if the 2019-20 will resume.