The Nashville Predators finally have their captain Roman Josi signed to a long-term deal, and general manager David Poile is so confident in the defenceman's future he included a rare no movement clause in the eight-year, $72.4 million deal. 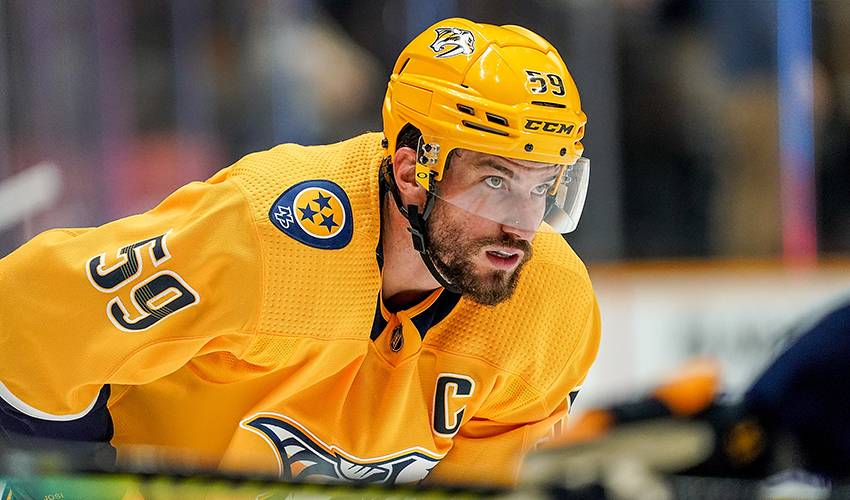 NASHVILLE — The Nashville Predators finally have their captain Roman Josi signed to a long-term deal, and general manager David Poile is so confident in the future he included a rare no movement clause in the eight-year, $72.4 million deal.

Poile said the negotiations, which made Josi the team's highest-paid player with an annual average value of $9.05 million, were crucial in helping the Predators lock up their core players. The GM also predicted Josi could win his first Norris Trophy as soon as this season.

"He ranks among the top year after year not only in points but in time on ice and under his leadership the Predators have won consecutive Central Division titles as well as the Presidents' Trophy two years ago, and I am confident Roman is the perfect captain to lead us to our ultimate goal, a Stanley Cup championship," Poile said.

The deal runs through 2027-28 and puts Josi among the NHL's highest-paid and keeps him off the free agent market next July. The contract starts with the 2020-21 season and goes through 2027-28 with a franchise that traded away a captain in Shea Weber in June 2016 and its former highest-paid player, P.K. Subban, this past June.

Josi said the signing the contract is like a dream since he started his career with Nashville. This is where he met and married his wife this past July, adding to Josi's reasons for wanting to stay with the Predators. Josi said he was relieved to have the contract wrapped up.

"Most importantly, every year this organization, David and the whole staff, they put together a team that has a chance to win the Stanley Cup and yeah I couldn't be more thankful for my teammates," Josi said. "We again this year have such a great team, and it's been so much fun so far and yeah we'll do everything in our power to get a Stanley Cup to Nashville to this great organization."

Poile believes Josi will be like one of the 29-year-old Swiss' heroes, Roger Federer — and only improve with age.

"I truly believe the best is yet to come," Poile said.

The 38th pick in the 2008 draft, Josi became Nashville's eighth captain in September 2017. Now he is one of only four NHL with at least 40 points in each of his last six seasons for Nashville. He was an All-Star last season and played for Switzerland at the 2014 Sochi Olympics.

He currently is tied for second with five goals and 13 points among NHL and tied for 12th among all skaters.

Matt Duchene had been impressed by Josi before signing his own seven-year, $56 million deal this July to join the Predators. Duchene said he knew Josi was one of the NHL's top before becoming his teammate and now believes the is even better than he thought with his offensive creativity.

"He's not your traditional , but he does all the things that traditional d-men still do really well," Duchene said. "He plays physical, he's great defensively, but with the puck I mean I love how dynamic he is. And it's really fun to watch him, be out there with him. But even with his creativity, he's not a hard guy to read out there. That's a pretty rare combination."

"We all were waiting for this day because mentally it's important at that you have your captain, you have your leader locked in," Rinne said. "When you compare him to the rest of the league, in my list he's probably at the top."

This deal locks up Nashville's core through at least 2021-22 for coach Peter Laviolette.

"We have more miles on us, all of us see that," Laviolette said. "You talk about the core players that have been here for a while, we've experienced some successes and we've got some scars on us. And I think all of that helps to build our team."