John Tavares said recently when he used to dream about playing for the Toronto Maple Leafs there wasn't a 'C' on his jersey. 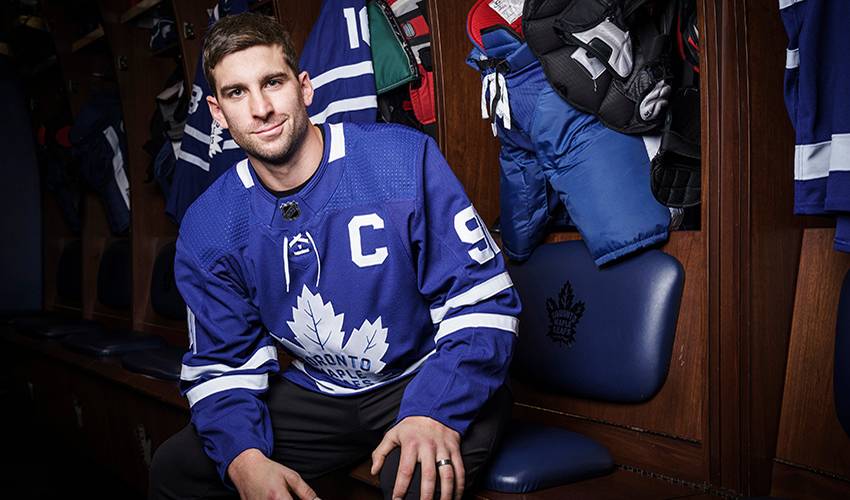 TORONTO — John Tavares said recently when he used to dream about playing for the Toronto Maple Leafs there wasn't a 'C' on his jersey.

Just being on the ice in blue and white was enough.

Now the 29-year-old has surpassed even his own childhood expectations.

Tavares was named the 25th captain in franchise history Wednesday during the pre-game ceremony before the NHL season opener against the Ottawa Senators, filling a role that had been vacant for more than 3 1/2 years.

The Oakville, Ont., product was told the news 48 hours earlier, with wife Aryne and three-week-old son Jace playing a part in the unveiling at the team's offices.

In a video released by the Leafs, Jace wore a miniature version of his dad's No. 91 jersey with a 'C' on the front before Tavares was handed the real thing by head coach Mike Babcock.

"I'll never forget that moment," Tavares said following Toronto's 5-3 victory over Ottawa. "It's been an amazing three weeks. To see (Jace) there with it on to be the one to tell me was very emotional and really, really special.

"It's hard to really describe it."

Tavares was the last of his teammates to step onto the ice at a raucous Scotiabank Arena on Wednesday, saluting the crowd with his stick.

"I think he was a great choice," Leafs general manager Kyle Dubas said during a first-intermission press conference. "But I think one of the major benefits that we had was that we had a number of candidates for the position, and we were able to go through each player.

"It was legitimately a case where we felt we had a number of players that could carry that honour. In the end, we just decided as a collective group that John fit the role the absolute best at this time."

Toronto centre Auston Matthews, winger Mitch Marner and defenceman Morgan Rielly were named alternates, with the latter getting his 'A' on a full-time basis and the other two sharing the responsibility.

"It think all four of us look at it as a big honour," Matthews said. "Like we've been saying all along, there's lots of leaders in this room."

"He's just a guy that comes in every day and does his job," Matthews added. "He's humble, works hard and sets a good example for everybody."

Sittler and Clark were both in the building Wednesday and congratulated Tavares after the game.

"Those guys set the precedent," Tavares said. "They set the foundation of the organization that set the standard here, and why it's so special job to be a Maple Leaf and be a captain."

Matthews and Rielly were viewed as the other candidates for the captaincy, which Dion Phaneuf held from June 14, 2010, until he was traded to the Senators on Feb. 9, 2016.

There was debate in Toronto last week whether or not Matthews was still suitable for the role after news broke that he's facing a charge of disorderly conduct and disruptive behaviour stemming from an alleged incident — which he failed to disclose to the team — in his hometown of Scottsdale, Ariz., back in May.

Dubas said the allegation, which hasn't been proven in court, didn't play a role in the decision.

"This was exactly what we had and what we had discussed well before that," the GM said. "It didn't affect our decision making whatsoever."

Babcock said following Wednesday's morning skate that the team's brain trust wanted to be 100 per cent certain of its choice.

"He's the kind of person that our guys look up to and does everything right every day," Babcock added in his post-game remarks. "He's all about winning — he's not about John — he's about winning.

This report by The Canadian Press was first published Oct. 2, 2019.