Calgary Flames get Tkachuk back under contract with three-year deal

Grit and goals returned to the Calgary Flames in time for the regular season with the re-signing of Matthew Tkachuk. 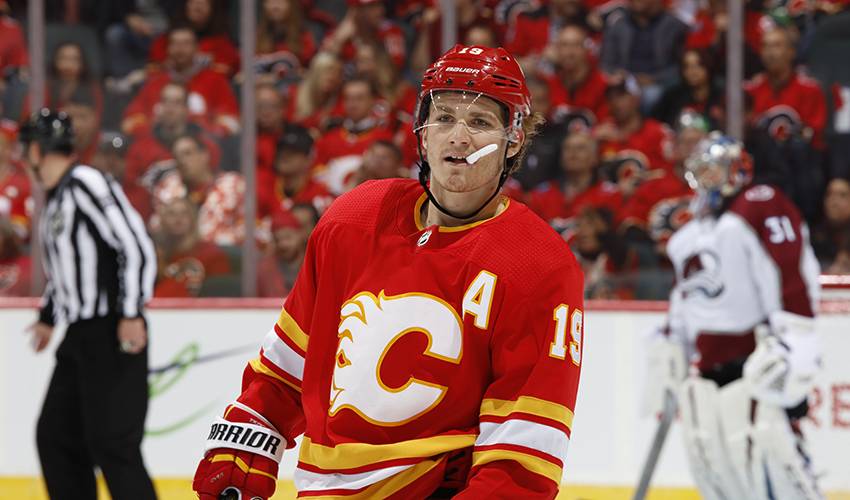 CALGARY — Grit and goals returned to the Calgary Flames in time for the regular season with the re-signing of Matthew Tkachuk.

The Flames announced a three-year, US$21-million deal with the 21-year-old winger Wednesday morning, giving Tkachuk time to catch a flight from Ontario and get to the Saddledome by late afternoon.

"To the fans, my Instagram and my Twitter took a hit the past couple weeks, but I'm happy that they're so passionate and they wanted me back really bad," Tkachuk said at a new conference.

"I would liked to have been here a little bit earlier, but I'm here and it's an exciting time to be a Calgary Flame."

Part of a 2019 cohort of restricted free agents who have altered the NHL's contract marketplace, Tkachuk was skating with his former junior team awaiting a new contract before reporting to training camp.

"It's not like he was in the Bahamas on the beach, so I know he's been working hard," Peters said. "I know he'll want to hit the ground running and I know he won't want to listen to the narrative of 'if you get off to a slow start it's because you missed however many days of camp.'

"He doesn't want to hear that. We'll try to get him up to speed as quick as we can. He's a smart player so I don't see any issue there."

Tkachuk's new contract keeps him with the team through the 2021-22 season.

The deal carries an annual average value of $7 million, which is the highest on Calgary's roster.

The contract is back-end loaded, according to capfriendly.com, with a third-year payday of $9 million.

Star winger Johnny Gaudreau and captain Mark Giordano are both on the books with salary cap hits of $6.75 million through the 2021-22 season.

"I'm sure he'll take all the guys out for dinner, but other than that, money is behind the scenes," Monahan said. "You just play hockey and you're teammates and friends."

Unlike Mitch Marner's six-year, $65-million deal with the Toronto Maple Leafs, Tkachuk's is a short bridge contract allowing the Flames to squeeze under the salary cap while giving Tkachuk the prospect of a richer deal in the not-so-distance future.

"Our two goals for the summer was to number one sign Matthew and number two keep our team intact," Flames general manager Brad Treliving said.

"What we wanted to eliminate was a distressed transaction where we were in a situation where we had to throw a body under the tarmac to create (cap) space."

"Matthew's goal was the same. He wanted to get his situation resolved, but it could not, would not and did not result with the elimination of a teammate."

Tkachuk has compiled 71 goals and 174 points in 224 regular-season NHL games since he was drafted sixth overall by the Flames in 2016. He has two goals and an assist in nine playoff outings.

Matthew Tkachuk excels around the opposition's net irritating defencemen and goalies, and scoring from close range with deflections and tip-ins.

"Not everybody brings what he brings to the table so it's nice to have that back in our room, back on the ice with us," Flames defenceman Travis Hamonic said.

"He's not afraid . . . to speak up verbally or vocally in the room. I think most importantly kind of back it up when he's on the ice too. That's a huge intangible to have as a leader right?"

Getting the six-foot-two, 202-pound forward back in the fold means a key part of the Flames nucleus remains in Calgary.

The Flames topped the NHL's Western Conference last season with 107 points before a hasty first-round exit in five games at the hands of the Avalanche.

Tkachuk turns 22 in December. He's been pegged as a possible future Flames captain because of his leadership and dressing-room presence at a young age.

Peters said Tkachuk will be reunited with centre Mikael Backlund and winger Michael Frolik on Calgary's second line and will return as the net-front presence for the top power-play unit.

That bumps Sam Bennett out of the top-six role he's had in training camp and Milan Lucic off the No.-1 power play team.

This report by The Canadian Press was first published Sept. 25, 2019.