It took until six days into training camp, but the Boston Bruins took care of their last bit of off-season business on Tuesday and can now focus on attempting to build off their run to Game 7 of the Stanley Cup Final last season. 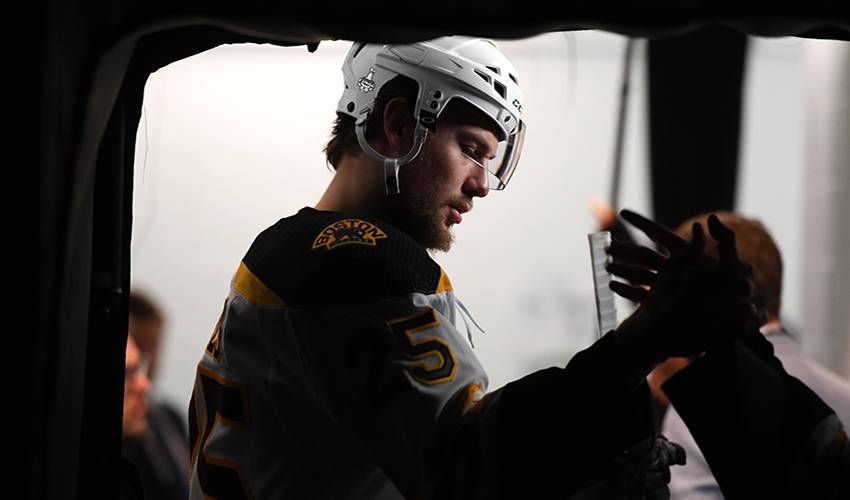 BOSTON — It took until six days into training camp, but the Boston Bruins took care of their last bit of business on Tuesday and can now focus on attempting to build off their run to Game 7 of the Stanley Cup Final last season.

Carlo, 22, said he kept in touch with McAvoy throughout the process and it was getting difficult to sit out.

"It was stressful for me throughout these past couple days, especially after Charlie signed, to not be a part of camp," Carlo said at a news conference Tuesday. "It's hard not being there grinding with your teammates. I was getting really antsy, couldn't even get comfortable on the couch the past couple days, but really excited to be here."

A 2015 second-round draft pick (37th overall), Carlo made the leap from major junior hockey to the NHL in 2016-17, averaging more than 20 minutes of ice time as a rookie. He's been a major part of the Bruins' top-four group in each of his three seasons, averaging 20:20 of ice time per night and anchoring Boston's penalty kill with captain Zdeno Chara.

Known more as a defensive , Carlo had two goals and eight assists in 72 games last season. But there might be more points in his future that could help him make more money in his next contract.

"So for me, I don't think you put a ceiling on what he's capable of doing," Bruins general manager Don Sweeney said. "But he also has to live up to his own ideals of what he does really well and, obviously, shutting down and taking responsibility at the end of games, close out games, protect leads, block shots, to do the things that other players might not be as willing to do, he does really well, and then allowing his game to grow offensively."

Said Carlo: "I feel like I can get up in the rush a little bit more and contribute, and I think with confidence I'll recognize that more on the ice."