Predators invest in their offence by signing Matt Duchene

The Nashville Predators took a big step toward boosting their offence Monday by signing Matt Duchene away from the Columbus Blue Jackets, paying a big price to land a forward they had long targeted. 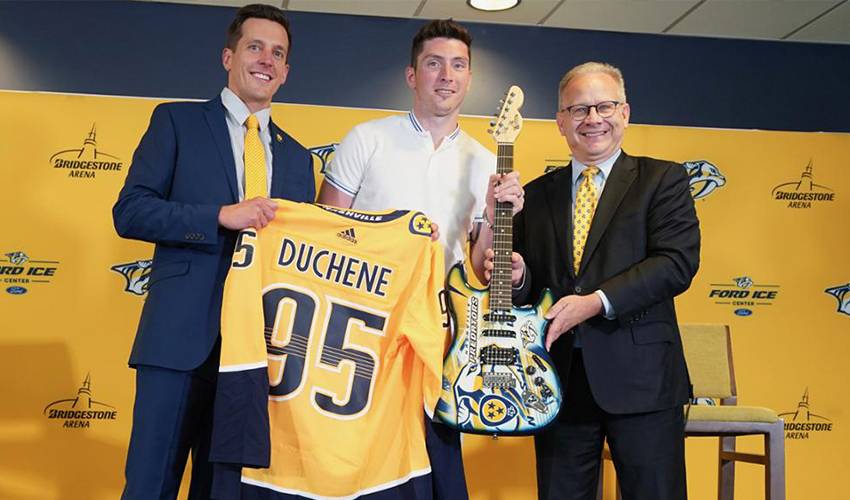 The Nashville Predators took a big step toward boosting their Monday by signing Matt Duchene away from the Columbus Blue Jackets, paying a big price to land a forward they had long targeted.

Duchene received a seven-year contract worth $56 million. He will be expected to spark the Predators' scoring attack after a season in which they had the NHL's worst power play and made a first-round playoff exit.

The 28-year-old , who calls himself a "wannabe country singer" in his Twitter and Instagram bio, said the move to Nashville seemed like a "perfect fit" for him and his family.

"It's been a place where we've wanted to be for a long time," Duchene said. "To see it come to fruition is really, really exciting. We love the city. The fans are unbelievable, and the most important part, which is the hockey part, it's a hell of a team to be joining. I can't wait to play with those guys, get out there and get started."

The signing comes just over a week after the Predators traded six-time All-Star P.K. Subban to New Jersey for Steven Santi and Jeremy Davies, plus two draft picks. Subban was set to make $9 million each of the next three seasons.

Predators general manager David Poile said after that trade that the move was necessary to create salary-cap space to strengthen the team at the forward spot.

"Let's call it like it is," Poile said. "If we don't make the Subban trade and get rid of his money, it's going to be much more difficult to get into the Duchene sweepstakes, if you will."

Duchene had 31 goals and 39 assists this past season with the Ottawa Senators and Columbus Blue Jackets, who obtained him at the trade deadline. He also had five goals and five assists in 10 playoff games for Columbus as the Blue Jackets produced a stunning first-round sweep of the Tampa Bay Lightning before losing to Boston in the second round.

This wasn't the first time the Predators had been linked to Duchene, a frequent visitor to the Nashville area.

"It was crazy over the last few years how many times I thought I was going to be a Predator and ended up either in a different place or it just not happening," Duchene said.

The Predators tried to acquire Duchene from Colorado in 2017 before he was traded to Ottawa as part of a three-way deal in which Nashville added forward Kyle Turris.

"It was talked about in the media the last three years," Poile said. "We made no secret, I think, that we were trying to get him. He made no secret that he had an affinity for the city."

Yet Poile noted he never formally met Duchene until the past week or so as the free agent forward started his selection process. Until then, Poile said his only contact with Duchene had been the occasional nod when they crossed paths.

Duchene said he became even more interested in joining the Predators after speaking to coach Peter Laviolette. Duchene said a conversation with Laviolette that was supposed to take 10 minutes lasted 40-45 minutes as they talked hockey.

"We couldn't have been more on the same page," Duchene said. "He's a guy who wants to score more goals. As an offensive guy, that makes you drool a little bit when you hear your coach say that. That was awesome. (He's) a guy that wants to play a get-up-and-go fast style, make plays, be creative, that kind of thing. That was a huge draw for me."

Nashville lacked scoring punch this past season beyond its top line of Filip Forsberg, Ryan Johansen and Viktor Arvidsson. That became particularly evident in the , as the Predators failed to score on any of their 16 power-play attempts while losing to Dallas in six games.

Poile believed the Predators needed speed and . He considers Duchene one of the NHL's most potent and an ideal candidate to address those two concerns. The Predators gave Duchene a modified no-trade clause for the last three years of his deal, enabling him to list seven teams that can't acquire him.

Nashville also signed forward Daniel Carr to a one-year contract worth $700,000. The 27-year-old Carr was the American Hockey League's most valuable player this season, as he had 30 goals and 41 assists for the Chicago Wolves.