John Davidson had a close-up look at how good Artemi Panarin is while the two were with the Columbus Blue Jackets. Now, they will be reunited in New York. 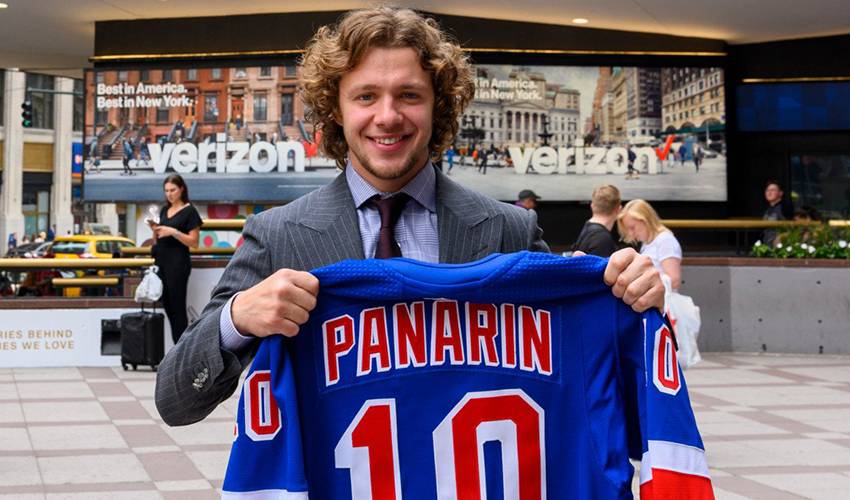 NEW YORK — John Davidson had a close-up look at how good Artemi Panarin is while the two were with the Columbus Blue Jackets. Now, they will be reunited in New York.

Some six weeks after Davidson returned to the Rangers as team president following seven seasons in the same position with the Blue Jackets, Panarin — the top free agent available this — is following his former boss to Madison Square Garden.

Panarin signed a seven-year, $81.5 million deal with the Rangers, general manager Jeff Gorton confirmed. The scoring winger reportedly turned down more money from the Islanders, among others.

"We know he definitely wants to be here in New York, specifically with the Rangers," Davidson said. "It's a perfect fit."

The rival Islanders were busy, too, re-signing captain Anders Lee to a seven-year, $49 million deal and bringing in veteran goalie Semyon Varlamov on a four-year contract while letting fan and Vezina Trophy finalist Robin Lehner leave.

But the big news in the Big Apple came from the Rangers.

The 27-year-old Panarin had 28 goals and 59 assists last season while helping Columbus get the last wild card in the Eastern Conference and then beat Presidents Trophy-winning Tampa Bay to advance to the second round. Panarin, who won the Calder Trophy with Chicago as the league's top rookie, has career totals of 116 goals and 204 assists in 322 games over four seasons with Blue Jackets and Blackhawks.

"He was obviously a player we coveted and wanted," Gorton said, adding the Rangers didn't find out Panarin's decision until just after the start of the free agency period at midday.

The signing moved the Rangers' rebuild a giant leap forward. The Russian provides the team the scoring touch they've lacked while missing the last two playoffs after a run of seven straight appearances, including a run to the Stanley Cup Final in 2014.

New York also agreed to terms with forwards Greg McKegg and Danny O'Regan. McKegg had six goals and five assists in 41 games with Carolina this season, and the 25-year-old O'Regan has one goal and four assists in 25 career games with San Jose and Buffalo.

Ahead of trade deadline in 2018, Rangers released a letter to fans announcing their intent to rebuild, and then dealt forwards Rick Nash and J.T. Miller and Ryan McDonagh for young players and draft picks. The purge continued at this year's deadline with the departures of Mats Zuccarello and Kevin Hayes.

There were a lot of ups and downs for the Rangers in the first full season of the makeover. They were 32-36-14 in the first season under coach David Quinn, getting just five wins in their last 21 games (5-10-6) to finish seventh in the eight-team Metropolitan Division — 20 points out of the last wild card in the East for the second straight year.

However, the Rangers have been busy improving the since the end of their season. They signed Adam Fox, acquired the rights to restricted free agent Jacob Trouba from Winnipeg and drafted Kaapo Kakko with the second overall pick in the draft.

"The idea of a (rebuild) is to get picks and Jeff did a good job," Davidson said. "Then you go through the draft and you go through the development. As you do this you try your best to find ways to try to make it all happen even quicker and better. ... It's all falling into place."

Vin A. Cherwoo, The Associated Press

Artemi Panarin – aka “The Bread Man” – has a new bobblehead figure, and it’s the greatest thing since sliced bread.