A rink rat often found on the practice ice long after his teammates have hit the showers, Jason Spezza has always joked he'd play hockey for free. 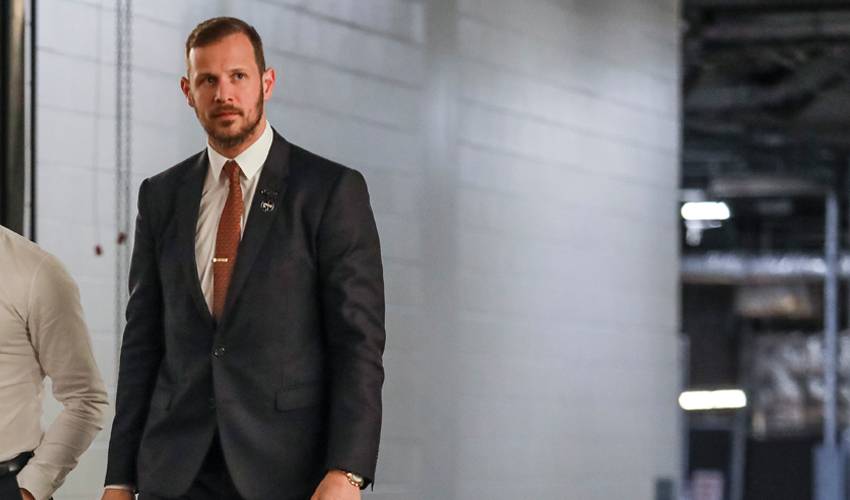 TORONTO — A rink rat often found on the practice ice long after his teammates have hit the showers, Jason Spezza has always joked he'd play hockey for free.

With all the ticket requests about to come his way, he might just have to next season.

The veteran centre and local product signed a one-year contract worth US$700,000 with the Toronto Maple Leafs on Monday as NHL free agency opened.

"I'm playing for the love of the game this year, that's for sure," Spezza joked on a conference call with reporters.

But don't feel too bad for the 36-year-old unrestricted free agent, who according to capfriendly.com has made nearly $87.5 million in his career.

This move was about coming home, getting a chance to win with the team he grew up cheering for, and potentially extending his career beyond 2019-20.

And the conversations he had with Leafs general manager Kyle Dubas and head coach Mike Babcock during the league's speaking period ahead of free agency clinched his decision.

"I was looking for a good fit," said Spezza, who grew up in the Toronto suburb of Mississauga. "I felt this has a really good chance to work out and I could be a good complementary piece to this team and hopefully get us to a point where we can get over the edge and win a Cup.

"It made sense on a lot of different levels for me."

The Leafs then made a big trade Monday evening, sending centre Nazem Kadri, defenceman Calle Rosen and a third-round pick in the 2020 draft to Colorado for blue-liner Tyson Barrie, forward Alex Kerfoot and a sixth-round selection next June.

The Avalanche will also pick up 50 per cent of the remaining $5.5 million owed to Barrie, who is set to become a UFA next summer, and is the key to the deal for Toronto.

Dubas said earlier in the day Spezza should fill a role for a young, talent-filled team that has lost to the Boston Bruins in the opening round of the playoffs the last two springs.

"Just seemed like the perfect fit in terms of what he can bring in terms of his experience," Dubas said at a Scotiabank Arena news conference. "He sort of lived through, early in his career in Ottawa, a team with very high expectations, a very good young talented team with a strong core."

Drafted second overall by the Senators in 2001, Spezza got a taste of the epic playoff battles between Toronto and Ottawa, including the last time the Leafs advanced to the second round in 2004 — at the expense of their provincial rivals.

"Toronto was definitely a team that when I first got to Ottawa was definitely a bit of a mental block," Spezza recalled. "I was a young player so I was little bit naive to some of the history that had maybe gone on before me, but the rivalry was big.

"I understand the rivalry more than anyone. I knew that we would get up a little more to play the Leafs."

Spezza registered eight goals and 27 points in 76 games in 2018-19 with Dallas, where he made $7.5 million each of the last four seasons.

Spezza, who should help replace the veteran leadership of the since-departed Patrick Marleau, added three goals and two assists in 11 playoff games, but will now switch to blue and white.

"It doesn't seem real, to be honest," Spezza said. "My family's very excited about it. I grew up a Leafs fan, as probably every kid in Toronto does. Dougie Gilmour, Wendel Clark were my guys.

"When you get drafted by Ottawa and play 12 years there you probably don't think that's ever going to happen. It's your biggest rivalry, but the way things shook out I went to Dallas. Now coming back here is something I'm really excited about."

Spezza joins a roster that's already deep down the middle with Auston Matthews and John Tavares, but is now minus Kadri.

"I'm going to be a complementary guy," said Spezza, who is close with Tavares off the ice. "There will be times when I play in different spots."

He's looking at a bottom-6 role with Toronto, and is fine doing whatever Babcock asks of him.

"There's some talent, there's lots of speed," Spezza said. "The league is about depth now, and you see the teams that played to the end. You needed all four lines."

Spezza was scratched for a couple of games early in the playoffs this spring with Dallas — something that didn't sit well with the two-time all-star.

"I definitely have a little bit of a chip on my shoulder," he said. "I took it on as a challenge."

A big point producer most of his career, Spezza added that he's looking forward to learning about different aspects of the game from Babcock.

"He's willing to work with me and help me transition," Spezza said. "Coming to play for a guy as demanding as him could help me play a little bit longer."

Meanwhile, the Leafs bid farewell to veteran defenceman Ron Hainsey and depth forward Tyler Ennis after both UFAs signed with the Senators as UFAs. Hainsey, 38, got a one-year deal worth $3.5 million, while Ennis, 29, is signed for next season at salary cap hit of $800,000.

Zaitsev was on the books for $4.5 million for the next five years, while Brown is scheduled to make $2.1 million in 2019-20. Ceci, an RFA with arbitration rights, made $4.3 million last season and can become an unrestricted free agent next summer.