Jack Hughes and Kaapo Kakko each wanted to be No. 1. 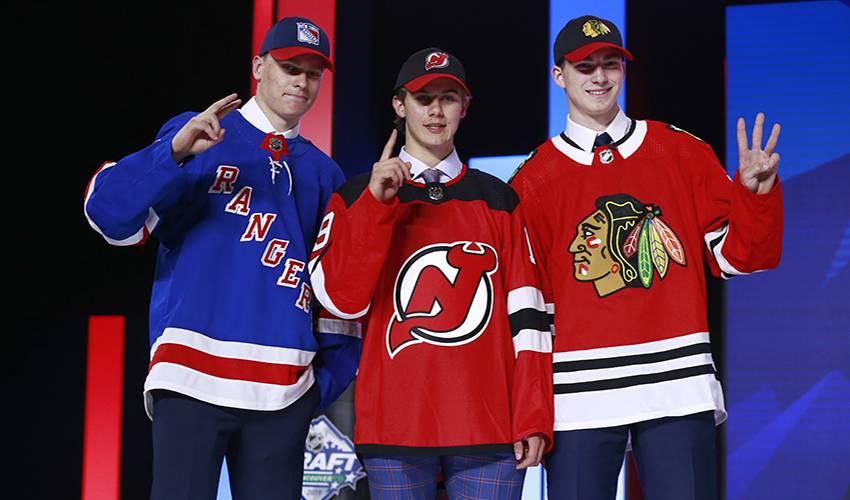 VANCOUVER — Jack Hughes and Kaapo Kakko each wanted to be No. 1.

One got his wish.

The other is going to work to prove he should have heard his name called first.

The New Jersey Devils chose Hughes with the top selection in Friday's NHL draft, ending a year of back-and-forth speculation about which talented forward would open the night by climbing onto the stage at Rogers Arena.

"Going first overall was a dream of mine," said the 18-year-old Hughes. "The Devils are a great organization, a great team, lots of good players, a pretty rich history, too.

"It's a spot that really wanted me, I knew that from the get-go."

The New York Rangers then stepped up to the microphone and got a pretty good consolation prize in Kakko.

But asked if he'll be looking to show New Jersey should have taken him instead of Hughes every time he suits up in blue — especially when the geographic rivals meet — Kaako responded "yeah" with a little grin.

A flashy centre, Hughes put up a record 154 assists and 228 points over two seasons with the under-18 U.S. National Team Development Program, while Kakko scored 22 goals — a record for a draft-eligible prospect — in Finland's top division in 2018-19.

The Devils had the third-best odds of winning the draft lottery back in April, but jumped two spots for the right to draft Hughes, who joins a team that already boasts fellow former No. 1 picks Taylor Hall and Nico Hischier up front.

New Jersey made the playoffs for the first time in five seasons in 2017-18, but is coming off a last-place finish in the Metropolitan Division.

Hughes said he didn't really feel any jitters until just before his name was called.

Hughes was born in Orlando, Fla., but spent his formative years in the Toronto area when his father worked for the Maple Leafs. He's the eighth American-born player to go No. 1 and the first since Toronto took Auston Matthews in 2016.

Hughes is also just the second USNTDP player to be drafted No. 1 directly out of the program after the St. Louis Blues took defenceman Erik Johnson first overall in 2006.

Friday was a banner night for the USNTDP, which had eight players taken in the first round, including three in the top-10. The previous record for the program was three.

"I'm really excited for them, too," Hughes said. "We had a great group of guys, a lot of great people, great players. It's a really, really good feeling to experience this with them."

The five-foot-10, 170-pound playmaker is the younger brother of Vancouver Canucks defenceman Quinn Hughes, who was selected seventh last June in Dallas.

Kakko, meanwhile, heads to the Big Apple with quite a resume. He's already won three gold medals internationally, including the 2019 world junior hockey championship in Vancouver and the recent men's worlds in Slovakia.

His 22 goals this season was one better than the 21 that Aleksander Barkov scored in 2012-13 before he was picked second overall by the Florida Panthers.

Kakko, a six-foot-two, 194-pound winger from Turku, buried the winning goal for Finland at the 2019 world juniors before scoring six times to lead his country at the men's worlds last month.

His selection at No. 2 marks the fourth time in the last four years a Finn has gone in the top-3, following on the heels of Patrik Laine (second to Winnipeg in 2016), Miro Heiskanen (third to Dallas in 2017) and Jesperi Kotkaniemi (third to Montreal in 2018).

"We're going to be linked together for a long time," Hughes said of himself and Kakko. "It's going to be pretty cool."

Kirby Dach was the first Canadian off the draft board, with Chicago taking the centre at No. 3. The 18-year-old from Fort Saskatchewan, Alta., had 25 goals and 48 assists with the Western Hockey League's Saskatoon Blades in 2018-19.

"I'm at a loss for words for what just happened," Dach said. "But it's awesome to be picked by the Blackhawks."

Next up was Colorado, which chose Bowen Byram fourth. The six-foot, 193-pound defenceman from Cranbrook, B.C., had 26 goals, 45 assists and a plus-33 rating for the WHL's Vancouver Giants last season.

The selection originally belonged to Ottawa, but was acquired by the Avalanche as part of the blockbuster Matt Duchene trade with the Senators back in November 2017.

"Everyone knew what was happening the first two picks," Byram said. "After that nobody knew what was going on, but then when (Colorado) got up there I had a really good feeling about them from the start.

"When they called my name it was pretty cool."

All told, 13 Canadians were taken in the first round.

Colorado also had the best odds to win the 2017 draft lottery, but also fell to fourth when New Jersey jumped to the front of the line and drafted Hischier. The Avalanche did get defenceman Cale Makar that year, who made his debut in this spring's playoffs and figures to be a difference-maker moving forward.

The Buffalo Sabres picked Dylan Cozens at No. 7, making the Lethbridge Hurricanes centre the first player from Yukon to ever be drafted in the first round.

"It means so much," Cozens said. "I so proud to represent the Yukon."

The Edmonton Oilers were the first Canadian team to make a selection, going with defenceman Philip Broberg at No. 8, while the Vancouver Canucks chose Russian forward Vasily Podkolzin two spots later.

The Montreal Canadiens took winger Cole Caufield of the USNTDP at No. 15 before Ottawa grabbed defenceman Lassi Thomson of the Kelowna Rockets at No. 19. The Winnipeg Jets then made it two consecutive Finnish blue-liners, taking Ville Heinola with the 20th selection.

The Calgary Flames chose forward Jakob Pelletier of the QMJHL's Moncton Wildcats with the 26th pick to round out the selections for Canadian teams. The Toronto Maple Leafs were on the sidelines after they traded the 19th selection to the Los Angeles Kings for defenceman Jake Muzzin back in January.

Friday marked a record fourth straight year a Canadian didn't go No. 1 in the draft, which continues with rounds two through seven on Saturday.