To grandma with love: O'Reilly hopes to take Cup to big fan

Ryan O'Reilly should expect another email from his 99-year-old grandmother. 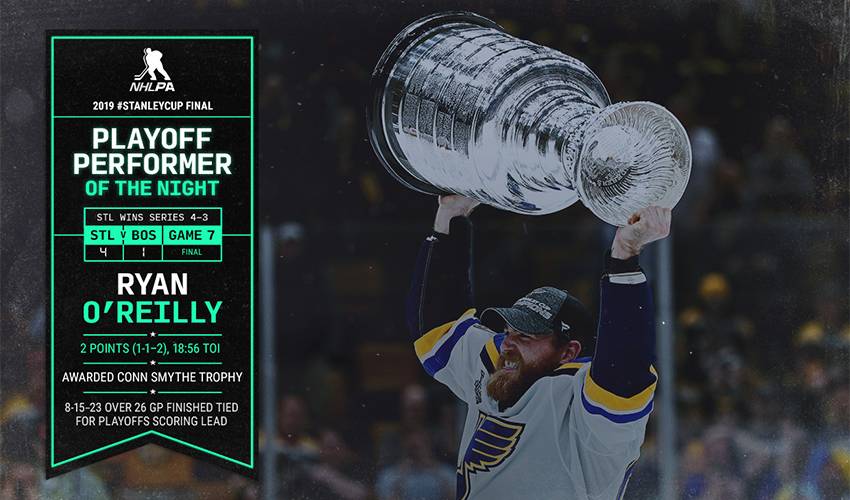 BOSTON — Ryan O'Reilly should expect another email from his 99-year-old grandmother.

Congratulations from Deirdre O'Reilly are certainly in order after her grandson won the Stanley Cup and the Conn Smythe Trophy as the most valuable player in the NHL playoffs. O'Reilly scored the opening goal for the St. Louis Blues in Game 7 of the Stanley Cup Final to help beat Boston 4-1 and give the franchise its first title in its 51st season.

"You dream of this for so long," he said. "As a kid, that feeling comes back to you of just what it means to win this thing. I still can't believe this. I can't believe I'm here right now and a Stanley Cup champion with this group of guys."

O'Reilly made good on Doug Armstrong's blockbuster trade to acquire him last summer — and the line he told the St. Louis general manager on that initial call: "Let's go win a Cup."

O'Reilly was a major reason for that. He set a Blues record with 24 playoff points and became the first player since Wayne Gretzky in 1985 to score in four consecutive Cup Final games.

"His worth ethic and his production for us all year and then throughout the playoffs, he was just a relentless hockey player for a long time," coach Craig Berube said. "Never quits. Such a smart two-way player. He's a special player."

And O'Reilly did much of it after cracking a rib during the second round against Dallas and doing worse damage in the Western Conference final against San Jose. O'Reilly wanted so badly to excel in these moments that he played through the pain.

"There was a couple tough games, but once you kind of get going and the adrenaline takes over, I didn't notice it," O'Reilly said.

O'Reilly's grandmother watches and emails him from Seaforth, Ontario, where he grew up playing hockey. She bought him multiple pairs of skates when he was a kid and has tracked his progress very closely.

"She's obviously a big part of my career," O'Reilly said.

The 28-year-old 's career hit a new peak this season when he was a finalist for the Selke Trophy as best defensive forward and the Lady Byng for sportsmanlike and gentlemanly conduct. Then he raised his game even further.

After scoring just three goals in his first 22 playoff games, O'Reilly scored five in the past four to carry the Blues to the Stanley Cup.

"He looks energized to me a little bit more, more jump in his stride out there, and he's finishing," Berube said recently. "He gets chances all the time, but he's finishing right now."

This is the time O'Reilly had been waiting for after several soul-crushing seasons in Buffalo. After getting a taste of the playoffs with Colorado in 2010 and 2014, he missed with the Avalanche in 2015 and with the Sabres from 2016-2018.

O'Reilly raised eyebrows on locker cleanout day in Buffalo 15 months ago when he said he'd "lost the love of the game" multiple times throughout a trying season and needed to get it back. The trade to St. Louis last summer changed everything, and now it's back in every possible way.

"It's very refreshing," O'Reilly said. "It just kind of helps remind you what it's all about and why as a kid you play the game to have a chance to win a Stanley Cup and to be a part of a group like this, it just gave me a new life and reminder of how good and exciting this game can be."

O'Reilly stated the obvious that winning is fun, losing is tough and "it eats away at you." It was fun for the Blues in coming back from 1-0 and 2-1 series deficits in the final in large part because O'Reilly helped lead the way.

Following a horrendous faceoff performance in a blowout Game 3 loss, O'Reilly won 43 of 70 faceoffs the next three times out to help the Blues control play and take it to the Bruins.

O'Reilly of course scored some big goals in the process, too. Throughout the season, he earned a ton of respect from his teammates, referring Patrick Maroon to his sports psychologist dad and pulling a team together that had six new faces.

"Off the ice, he's an unreal guy," linemate Zach Sanford said. "Everyone loves him. He's a good guy, he's a nice guy. He's always putting in the work. You see him after practice, leading all these drills on the ice and before games doing all these warmup drills and stuff. Obviously on the ice he's a great player. He's good offensively and defensively. There's not too many guys that can do it at the level he does."

That showed in the Stanley Cup Final that made all those years watching playoffs this time of year feel like they had a purpose.

"The Cup is the ultimate goal," O'Reilly said. "(I was) just trying to go out there and be the spark and try to make a difference."