Blues beat Bruins to knot Stanley Cup Final at 2-all

Ryan O'Reilly scored the opening goal and the game-winner as he and the St. Louis Blues won Game 4 in a 4-2 victory over the Boston Bruins Monday to tie the Stanley Cup Final. 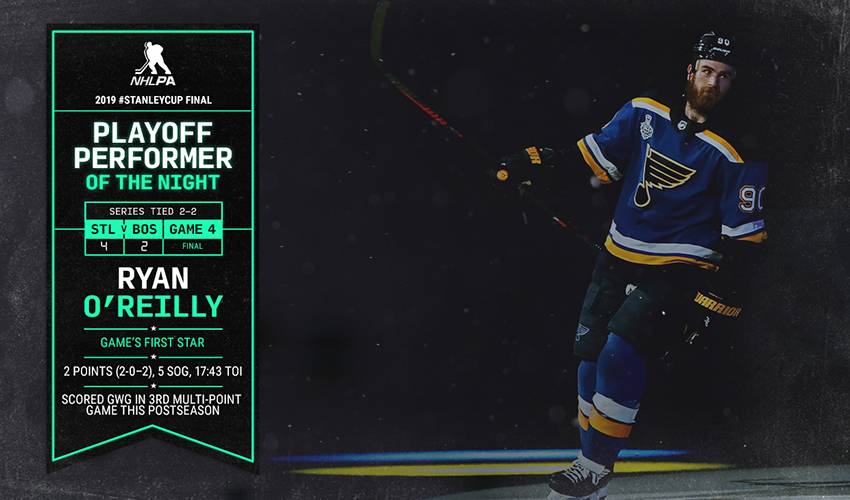 ST. LOUIS — Just when the St. Louis Blues had the Boston Bruins on their heels and chasing the game, they gave up a goal and the roar went right out of the building.

The Blues could have let the talented Bruins seize the moment, let things get away from them on home ice. Again.

They didn't. The team that was mired in last place in the NHL in January, that suffered from missed calls in the playoffs and slogged through some tough losses instead showed the resolve of a championship contender and is now two victories away from lifting the Stanley Cup.

Ryan O'Reilly scored the opening goal 43 seconds in and the winner with 9:22 left, and he and the Blues beat the Blues thrived in a chaotic Game 4 of the Stanley Cup Final on Monday night to beat the Bruins 4-2 and tie this bruising series at two games apiece.

"We knew what we had to do tonight to be a better team," coach Craig Berube said. "We were relentless tonight. We didn't stop for 60 minutes."

Game 5 is Thursday night in Boston.

This one was a back-and-forth thriller, with Boston's Tuukka Rask and St. Louis' Jordan Binnington each giving up tons of rebounds for frantic scoring chances and scrums.

Vladimir Tarasenko scored his 11th goal of the playoffs, and Binnington made 21 saves to improve to 7-2 in the after a loss. Even more impressive was the rookie's bounce-back from being pulled in Game 3 for the first time in his NHL career. Rask allowed three goals on 37 shots and was on the receiving end of several Blues onslaughts.

"He spit some rebounds out," Bruins coach Bruce Cassidy said of Rask. "But I don't have an issue with his rebound control."

Charlie Coyle scored for the third consecutive game, and Brandon Carlo had a short-handed goal for Boston, but their stars were quiet again and a big problem may be brewing: Boston captain Zdeno Chara was knocked out of the game by a puck to the mouth. Chara was allowed to sit on the bench, but it's uncertain if he'll be able to play in Game 5 when the Bruins could be without two of their top six .

O'Reilly ended an eight-game goal drought by cashing in two rebounds off Rask for his first multi-goal game since November. After losing 15 of his 23 faceoffs in a tough Game 3, O'Reilly was dominant all over the ice.

"He's been our best player all year and he got rewarded," winger Patrick Maroon said of O'Reilly.

Hockey Hall of Famer and Blues alum Brett Hull screamed at the top of his lungs into the microphone to pump up the crowd seconds before puck drop, "Are you ready? Let's Go Blues!"

They were ready, all right, and it started with O'Reilly's goal that was the Blues' sixth in the opening two minutes. They have done that now in all four rounds and are 6-0 when jumping out to a 1-0 lead in a game's first 20 minutes.

But this victory was all about responding well to yet another momentum swing that came on special teams: The Blues killed off a Bruins power play and then hemmed Boston in its own end for more than three minutes. While St. Louis cycled the puck in the offensive zone and changed several forward lines and defensive pairings, Boston defenders were gassed and Connor Clifton took a penalty for an illegal check to the head of Tarasenko.

Twenty-six seconds into the Blues power play, however, the Bruins inexplicably got numbers on a rush and Carlo scored shorthanded to tie it again. It was the fourth shorthanded goal St. Louis has allowed in the playoffs to only 13 power-play goals — but St. Louis didn't fold.

Another rebound off Rask paved the way for O'Reilly's go-ahead goal. With St. Louis leading, fans could happily sing John Denver's "Country Roads" at the under 6-minute timeout, and Brayden Schenn sealed it with an empty-net goal with 1:29 left.

When the final horn sounded, they played Laura Branigan's "Gloria" to celebrate the Blues' first-ever home victory in the Stanley Cup Final.

"Every year you keep hearing, let's go to finals, let's go win the Cup," Tarsaenko said. "Even after last year, you hear it all summer. People start believing in us and we feel it."

NOTES: Sundqvist returned from a one-game suspension for boarding Bruins D Matt Grzelcyk, who missed his second game in a row. Sanford remained in the lineup, and Robby Fabbri was a healthy scratch. ... Dunn replaced D Robert Bortuzzo in the St. Louis lineup.

The Blues and Bruins start all over again with a three-game series for the Cup with Game 5 in Boston on Thursday night.