May 16, 2019
By:
Canadian Press
Other News
Patrice BergeronBoston Bruins

The Boston Bruins have earned a break before their biggest series in a few years. 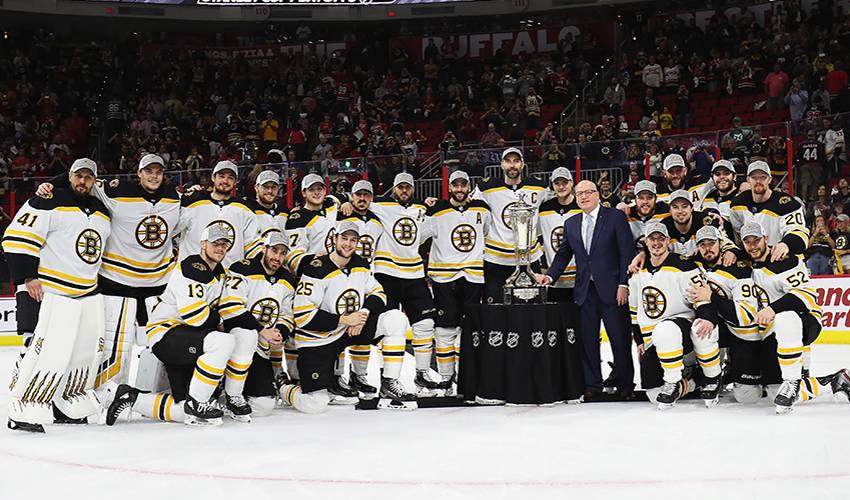 RALEIGH, N.C. — The Boston Bruins have earned a break before their biggest series in a few years.

Their sweep of the Carolina Hurricanes in the Eastern Conference final has afforded them a few extra days to rest up before their third Stanley Cup Final appearance in nine years.

So they can sit back, let their bumps and bruises heal — especially the ones that kept 42-year-old captain Zdeno Chara out of the series-clincher — and watch the San Jose Sharks and St. Louis Blues beat each other up a few more times.

"I think as you get older, you appreciate it even more, and you realize how hard it is to get to this point and advance and be thankful and stay in the moment," forward Patrice Bergeron said. "But then it's back to work, and there's a lot of work in front of us."

They won't spend the break worrying about losing the momentum of their longest winning streak in nearly half a century. No team that has swept its opponent from these playoffs has won its next series — a list that includes Columbus, the New York Islanders and these very Hurricanes.

The Bruins polished off their sweep on Thursday night, beating Carolina 4-0 in Game 4 for their seventh straight victory — their longest streak in the playoffs since they reeled off nine straight wins in 1972.

Now, after seven wins in 15 nights, they have the luxury of taking a deep breath before they play for the Cup yet again.

A handful of veterans in this group — including Chara, Bergeron, goalie Tuukka Rask and forward Brad Marchand — won it in 2011 and lost to Chicago at this stage two years later.

"We've basically kind of grew up together," Bergeron said. "It's been a fun ride to be a part with these guys as the core group. The leaders have been through a lot, I guess, ups and downs, and ... you realize how hard it is to get to this point, so you've got to be thankful for that."

The Bruins found a way to sidestep the run of first-round upsets that knocked both division winners, Tampa Bay and Washington, out early, though they needed seven games to get past Toronto.

They found their stride in their second-round series with Columbus, advancing in six games after winning the final three.

And once they got rolling, Carolina was powerless to stop them.

Boston was the quicker, stronger and tougher team — and it helped that they the best goalie. With Rask stopping 109 of the 114 shots he faced in the series, the Bruins trailed in only one game — the first one. After a pair of bang-bang power-play goals in the third period of that one, Carolina never led again. The Bruins scored 10 consecutive goals during a stretch that spanned the first two games.

Boston's best-in-the-playoffs power-play unit went 7 of 15 in the series with at least one goal in every game, including two in the series clincher. Rask has closed two straight series with shutouts and continued to look the part of a leading Conn Smythe Trophy candidate.

"I don't think the break will hurt him, other than you lose some of your sharpness of game intensity," coach Bruce Cassidy said. "I just see Tuukka not only as a goalie but as a person, as a really zoned-in guy right now. Really even-keeled. I don't see why that would change in a week. ... I assume he'll come out of it very well. He's played a lot of hockey, too. The break will do him some good."