May 15, 2019
By:
Canadian Press
Playoff Performer of the Night
Joe ThorntonSan Jose Sharks

Joe Thornton scored twice for San Jose as part of a three-point performance to post the first multi-goal game of his Stanley Cup Playoffs career. 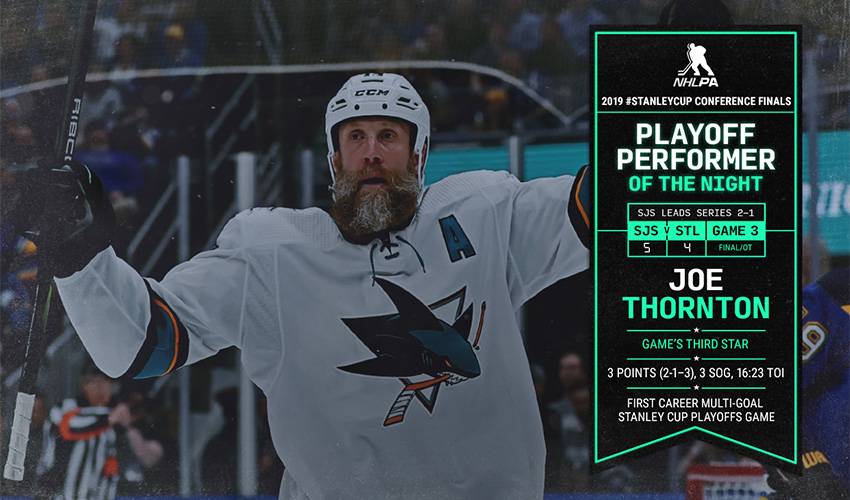 ST. LOUIS — Erik Karlsson scored 5:23 into overtime after the officials missed a hand pass by Timo Meier, and the San Jose Sharks rallied to beat the St. Louis Blues 5-4 on Wednesday night to take a 2-1 lead in the Western Conference final.

Meier used his right hand to knock a loose puck toward the front of the net. Gustav Nyquist then passed it over to Karlsson, who beat Jordan Binnington for his second goal of the game.

Binnington and the Blues complained immediately about Meier's pass. The officials huddled while Karlsson and the Sharks celebrated, but the play wasn't reviewable and the goal stood.

Game 4 of the best-of-seven series is Friday night in St. Louis.

The Blues led 4-3 before Logan Couture tied it with 61 seconds left in regulation. Joe Thornton scored twice for San Jose, and Martin Jones made 28 saves.

The Blues trailed 2-0 after one and 3-1 in the second before rallying.

Tarasenko, who faced criticism after a performance in Game 1, started the comeback with his first goal in six games at 4:05 of the second. Perron tied it by beating Jones on the stick side with a wrist shot from the left dot with 3:57 left in the period.

St. Louis went on a power play after Brent Burns took down Oskar Sundqvist late in the period. Perron scored his second goal of the series a minute later, giving the Blues the lead with their first power-play goal in 19 chances with the man advantage.

It was Perron's first multigoal playoff performance in 73 games.

After an early Blues push, the Sharks grabbed control in the first.

Blues Vince Dunn departed with 8:35 left in the first after getting hit in the face by a Brenden Dillon shot, forcing St. Louis to mix and match five .

San Jose then jumped in front when Karlsson intercepted a Joel Edmundson clearing attempt and beat Binnington with a wrist shot through traffic at 13:37.

Thornton made it 2-0 with 3:02 left in the first, scoring on a backhander after Robert Bortuzzo blocked a Marc-Edouard Vlasic shot.

Steen got the Blues on the board at 1:18 of the second, but Thornton answered 18 seconds later with his second goal of the game, giving him his first multigoal playoff game over 176 games in a 22-year career.

NOTES: The Blues and Sharks entered the game tied for first in the NHL with 38 points in the from their .