May 14, 2019
By:
Canadian Press
Playoff Performer of the Night
Tuukka RaskBoston Bruins

Tuukka Rask and the Boston Bruins stood tall during an early deluge of shots and penalties, patiently waiting for their chance to take over the game. 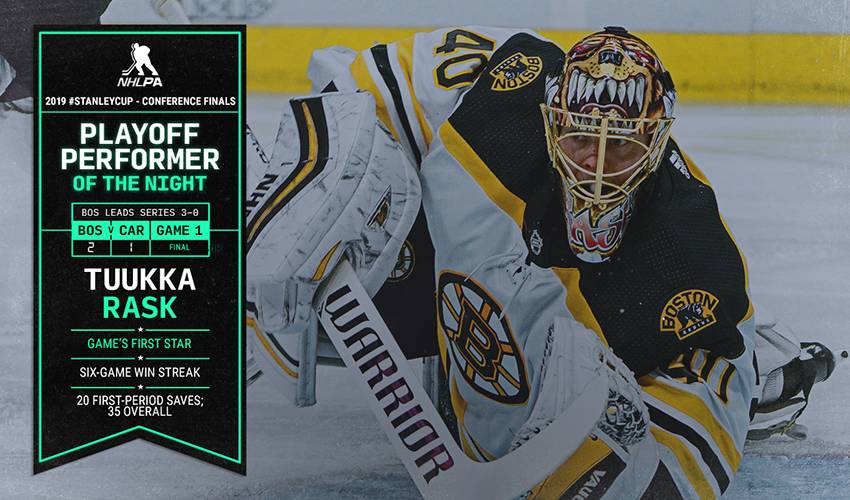 RALEIGH, N.C. — Tuukka Rask and the Boston Bruins stood tall during an early deluge of shots and penalties, patiently waiting for their chance to take over the game.

Then one big burst put them on the brink of another trip to the Stanley Cup Final.

The Bruins beat the Carolina Hurricanes 2-1 on Tuesday night, taking a 3-0 lead in the Eastern Conference final after Chris Wagner and Brad Marchand scored 5:07 apart in the second period.

"The moral of the story is, we got through the first period — however you want to describe it — and off we went after that," coach Bruce Cassidy said.

Rask stopped 35 shots for the Bruins, who have won six straight games for the first time since 1978. They are one victory away from their third Stanley Cup appearance in nine years.

Boston will go for the sweep on Thursday night.

"This year, I feel like we really have each other's backs," Rask said. "We've been in some tight games, and then our depth comes in, and we score some goals and we take over the games."

Calvin de Haan scored and Curtis McElhinney made 29 saves for the Hurricanes while starting in place of Petr Mrazek, who allowed 10 goals in the first two games of the series.

This one was closer, but it still wasn't enough to keep alive Carolina's perfection at home — where a pig named Hamilton looks on from behind the corner boards.

"There's no way around it. There's no way to sugarcoat it," Carolina coach Rod Brind'Amour said. We got kicked in the you-know-where."

And now they're in an unenviable spot. Only four teams in NHL history have ever rallied to win a series they trailed 3-0, and none since Los Angeles in 2014 — though Carolina captain Justin Williams was on that Kings team that rallied to beat San Jose in the first round.

"I'm probably going to give you ... the clichés that are going to be thrown to you and everything," Williams said.

This one got away from them in the first 7 minutes of the second, when the Bruins claimed control with their fourth line turning a turnover by Carolina's Brock McGinn into a 1-0 lead at 1:21.

Sean Kuraly collected the puck and passed low to Joakim Nordstrom, with the former Hurricane then finding Wagner alone in front for a tap-in.

"That line scored a goal by playing the right way, pursuing pucks," Cassidy said. "They're fourth-liners. You don't expect them to make a tic-tac-toe play, but they did, and good for them."

The Bruins entered with the NHL's best power-play unit — converting on a full third of their chances in the playoffs — and they were 1 of 5 in this one with the man advantage against a Carolina penalty kill that began with a sub-50% success rate in this series.

But that one goal was a significant one.

With 19 seconds left on a high-sticking minor on Nino Niederreiter, Marchand put Boston up 2-0 when his shot from between the circles trickled past McElhinney.

It loomed large because the Hurricanes pulled within a goal when de Haan's slap shot off a draw got through Rask's pads for the first goal since Nov. 8.

The Bruins thought Torey Krug had an insurance goal with 15:45 left, but the officials ruled Jake DeBrusk interfered with McElhinney — a decision that was confirmed after Boston's challenge led to a review in Toronto.

Rask made sure it ultimately wasn't.

After stopping 20 shots in the first period alone — and becoming the first Boston goaltender since Tim Thomas in 2011 with that many in a period — he remained difficult for the Hurricanes to figure out. Thwarting perhaps their best chance to tie it, Rask stuffed a slick power-play redirection by Jordan Staal with just under 13 minutes left.

This one was chippy throughout, with 14 penalties — 10 in the first period alone. That includes six by Boston and three by Williams, who also took his team's only two penalties in a 6-2 loss in Game 2.

But the Hurricanes' power play, which entered as the worst of the eight teams that advanced out of the first round, failed to score on five chances in this one, including four in the first, and fell to 1 of 12 with the man advantage in the series.

"Obviously, a little bit of frustration," Dougie Hamilton said. "I think we came out how we wanted to. We had a lot of shots, and obviously a lot of power plays and stuff. But we couldn't score, so that hurts."

NOTES: Carolina scratched LW Jordan Martinook, who has been dealing with a nagging lower-body injury. ... The Bruins improved to 5-1 this season against Carolina.

The Bruins will go for the sweep in Game 4 on Thursday night.