May 7, 2019
By:
Canadian Press
Playoff Performer of the Night
Tuukka RaskBoston Bruins

The Finn turned in his best playoff performance so far in the 3-0 win over the Blue Jackets in Game 6 that clinched the series to propel the Boston Bruins into the conference final against Carolina. 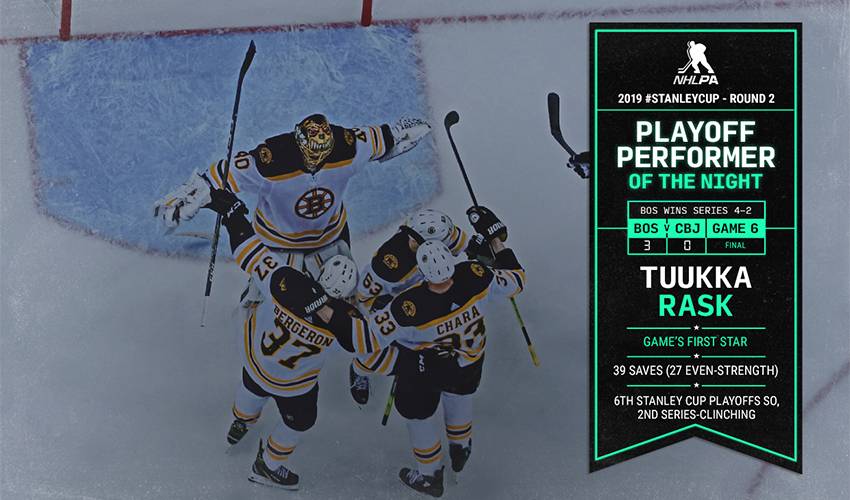 COLUMBUS, Ohio — The Boston Bruins got some timely goals in their tight Eastern Conference semifinal series with Columbus, and when the goals weren't coming, Tuukka Rask stood tall.

The Finn turned in his best playoff performance so far in Monday night's 3-0 win over the Blue Jackets in Game 6, leading the Bruins into the conference final against Carolina.

The Blue Jackets played hard and forechecked well enough to win every game, but were 0 for 10 on power-play chances in the final three games of the series, all won by Boston. Much of that was due to Rask, who had 39 saves in the clinching game.

"We are halfway to our goal," said forward David Backes, who scored Boston's final goal in the third period. "You need to relish the plateaus along the way. We are certainly at one of those to be among the final four teams. We've had to sacrifice to win some games against some really good teams.

"Now we can enjoy this for a day then have a happy flight home (Tuesday), then get ready for Carolina, who is well rested and ready for us," he said.

The Bruins will be without Charlie McAvoy for the series opener against the Hurricanes on Thursday night after the 21-year-old was suspended for one game for an illegal check on Columbus' Josh Anderson.

David Krejci and Marcus Johansson also scored for the Bruins in Game 6. David Pastrnak led the Bruins with four goals in the six games against Columbus.

"It was tight until the end," Krejci said. "We learned from it and closed it out tonight the way we wanted to."

Boston won the first game of the series in overtime, then fell to the Blue Jackets in OT in Game 2 and lost Game 3 by a goal before ripping off the final three victories. The Bruins are into the conference final for the first time since the 2012-13 season, when they lost in the Stanley Cup Final.

Carolina swept the New York Islanders in their second-round series.

"If you're playing this time of year, you're doing something right," Rask said. "You've built something great as a team. We're super happy that we're in the position. Trying to keep the train rolling."

Boston and the Carolina franchise will face each other in the for the fifth time. The Bruins won three of the previous series, but Carolina won the most recent meeting in the 2009 conference semifinals when Scott Walker scored in overtime in Game 7.

Boston won the season series against Carolina 2-1, including an overtime victory.

Boston coach Bruce Sullivan said Carolina is like a mix of hard-hitting Columbus and speedy Toronto, which the Bruins beat in the opening round.

"I think they're a little bit of both," Cassidy said. "Young team. () get up the ice. Flip goaltenders and didn't miss a beat. But we'll look at it a little closer starting (Tuesday). Obviously they've made it this far, they're a very good hockey club. I don't think you get this far by accident. So we'll have our hands full. But we're looking forward to it."