May 4, 2019
By:
Canadian Press
Playoff Performer of the Night
David PastrnakBoston Bruins 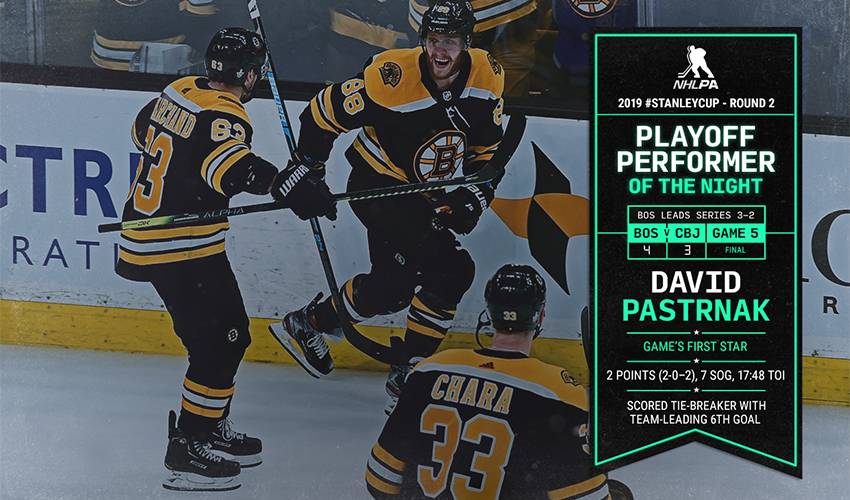 BOSTON — David Pastrnak scored his second goal of the game with 1:28 left to cap a wild third period, and Tuukka Rask stopped 33 shots to help the Boston Bruins beat the Columbus Blue Jackets 4-3 on Saturday night and take a 3-2 lead in their Eastern Conference semifinal series.

Rask got some help from the post when Matt Duchene stretched out to try to tip the tying goal in with less than a minute remaining and Blue Jackets goalie Sergei Bobrovsky off for an extra skater. In all, six goals were scored in the third, four during a 3 1/2-minute span that turned Boston's 2-0 lead into a 3-3 tie.

Bobrovsky made 32 saves for the Blue Jackets, who need a win in Game 6 on Monday night back in Columbus to force the series back to Boston for a decisive seventh game on Wednesday.

The winner will advance to the Eastern Conference finals to face the Carolina Hurricanes, who swept the New York Islanders in their series.

With Hall of Famer Bobby Orr greeting the team before the game and then watching from a box, the Bruins led 1-0 after one period and took a 2-0 lead early in the third when Connor Clifton's crossing pass came through the crease to Marchand and he one-timed it toward the upper right corner. Bobrovsky stretched out his glove to block it, but the effort caused him to fall forward onto the ice.

Before he could right himself Marchand had corralled the rebound and shot again at the same spot — this time finding the net.

That's when the scoring opened up.

With about 10 minutes left, Jones flipped one toward the crease and it deflected off Matt Grzelcyk's stick and Rask's pads to sneak inside the post. It took more than three minutes to review — and no view of the puck crossing the line was shown to the TD Garden crowd — but the goal was confirmed.

Just 43 seconds later, Pastrnak wristed the puck in from the left circle to restore Boston's 2-goal lead. Fifty-one seconds after that, the Blue Jackets cut it to 3-2 on Ryan Dzingel's goal and less than two minutes after that they tied it on a slapshot from the high slot by Dean Kukan.

But Pastrnak helped Boston avoid overtime when he flipped a cross-ice pass from Marchand into the goal for the game-winner.

NOTES: Krejci needs five more points in the to reach 100 in his career. He would be the fifth Bruins player to reach the milestone. ... Bruins forward Noel Acciari was scratched with an undisclosed injury. He was a game-time decision and was replaced by Chris Wagner. ... Columbus was without Riley Nash, who also missed Game 4. ... Columbus signed third-round draft pick goalie Daniil Tarasov to a three-year, entry level contract.