May 3, 2019
By:
Canadian Press
Playoff Performer of the Night
Teuvo TeravainenCarolina Hurricanes

Teuvo Teravainen had a second-straight multi-point game and the Carolina Hurricanes beat the New York Islanders 5-2 on Friday night to sweep their Eastern Conference series. 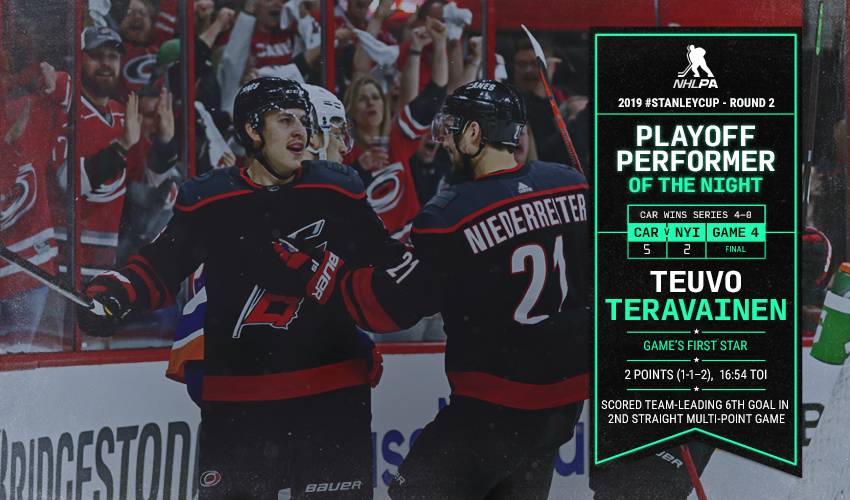 RALEIGH, N.C. — Teuvo Teravainen and Greg McKegg scored 66 seconds apart in the second period, and the Carolina Hurricanes beat the New York Islanders 5-2 on Friday night to complete a sweep of their Eastern Conference semifinal series.

Teravainen and linemate Sebastian Aho each finished with a goal and an assist, captain Justin Williams and rookie star Andrei Svechnikov each added insurance goals and goalie Curtis McElhinney made 26 saves in his second career playoff start.

The Hurricanes — who went a decade between playoff berths — earned the first four-game sweep in franchise history and have reached the Eastern Conference final in each of their last four appearances since 2002. They're also unbeaten in five home playoff games.

Now the Hurricanes — after winning six straight and eight of nine — have some time to heal before they face the Columbus-Boston winner.

Mathew Barzal scored a power-play goal and Brock Nelson added a late goal for the Islanders, who managed just five goals in the series and were swept for the first time since the Rangers did it in the first round in 1994. Robin Lehner started in goal, but was pulled in of backup Thomas Greiss after the bang-bang goals by Teravainen and McKegg early in the second period made it 3-1. Lehner and Greiss each finished with eight saves.

Esa Lindell also scored for the Stars, who can advance with a win in Game 6 at home on Sunday.

Jaden Schwartz scored and Jordan Binnington made 25 saves for the Blues, including stops on three breakaways in the first 4:08 of the second period to keep it a one-goal game at the time.