MacKinnon, Avs beat Sharks 3-0 in Game 4 to even series

May 2, 2019
By:
Canadian Press
Playoff Performer of the Night
Philipp GrubauerColorado Avalanche 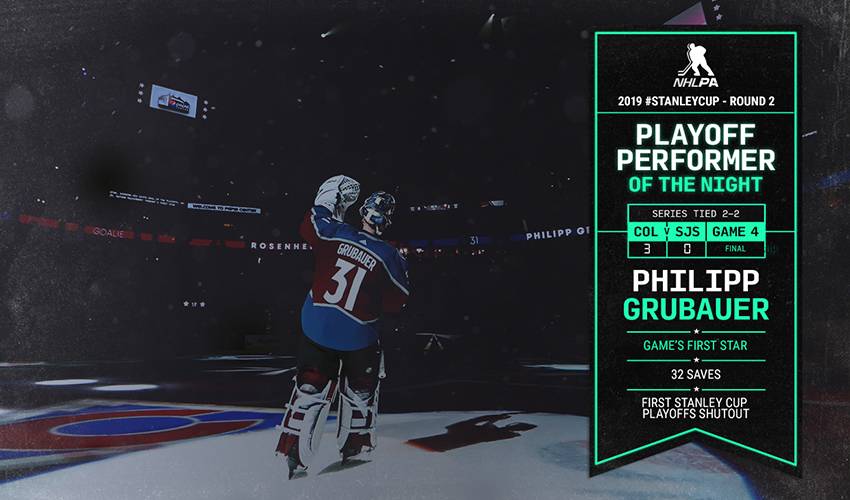 This was far from trash talk: The Colorado Avalanche are right back in the series.

MacKinnon kept up his scoring spree with a second-period goal, Philipp Grubauer stopped 32 shots for his first career playoff shutout and the Avalanche beat the San Jose Sharks 3-0 on Thursday night to tie the Western Conference semifinal series at two games apiece.

"Huge," Grubauer said. "The longer we can keep the zero up there the better it is, and the better chance we have to win."

Colin Wilson gave Colorado a two-goal cushion with a power-play goal early in the third period. Wilson's score was set up by a between-the-legs pass from Mikko Rantanen, who registered two assists. Erik Johnson added an empty-netter with 1:09 remaining.

Game 5 is Saturday in San Jose.

The chants of "Gruuuu" by the crowd only grew louder with every save Grubauer made. He turned back nine shots in the final period.

"We needed to win this game and he was unreal," Rantanen said.

In an attempt to bottle up the speedy MacKinnon, the Sharks kept rolling out their top defensive pair of Brent Burns and Marc-Edouard Vlasic. MacKinnon rarely had a moment when he wasn't shadowed.

Still, he found ways to shake free, including in the second period when the puck bounced off goaltender Martin Jones and into the air. MacKinnon was on the spot, taking one whack at it and then another to send it past Jones ("just cleaned up garbage, nothing really," he said). It was his sixth goal in this .

"I love it as a coach because I don't think you're going to be dancing around and making a bunch of high-skilled plays in traffic and score the highlight-reel goal that's going tic-tac-toe," Avalanche coach Jared Bednar said. "I don't see that happening. If you look at the goals that are scored in this series, guys are shooting, there's traffic. Both goals were the exact same way."

About that pass to Wilson, just how did Rantanen even see him?

"In the corner of my eye," Rantanen said. "Jones had pretty good position on me and trying to stuff it through his pads wasn't going to work for me. (Wilson) was in a good spot and it was a good goal."

For much of the night, Jones matched Grubauer's performance. He finished with 25 saves.

"We're disappointed, for sure. It was a good opportunity for us," Jones said. "But it's supposed to be tough."

One of Grubauer's top stops was near the end of the second period with Gustav Nyquist on the breakaway. Grubauer went into a full-out stretch in order to thwart Nyquist with his right pad.

"We had some good looks," Sharks coach Peter DeBoer said. "I thought we could have made it tougher on him."

Grubauer and the Avs found a way to corral Logan Couture, the leading goal scorer in the who was coming off a hat trick in Game 3.

This may be an encouraging development for the Sharks: Captain Joe Pavelski returned to skating. He was on the ice in San Jose on Wednesday, with DeBoer hearing "positive things" from the session.

Pavelski was hurt in Game 7 of the Vegas series when his helmet slammed to the ice. He's yet to play in this series.

And while he's has been on the minds of his teammates, DeBoer didn't buy into the notion that Pavelski could be a rallying force for his team.

NOTES: Sharks F Joonas Donskoi (undisclosed injury) hasn't played in the Colorado series. ... Avs F Matt Calvert returned after missing Game 3 with an upper-body injury. ... There was a moment of silence for the late Red Kelly, the - whose Hall of Fame career included eight Stanley Cups while playing for Detroit and Toronto. He died Thursday at 91. ... Grubauer is the first German-born goaltender in NHL history to record a shutout in the Stanley Cup playoffs and the second of German nationality to accomplish the feat, joining Olie Kolzig (six). ... Rookie Cale Makar recorded his fourth assist of the . ... MacKinnon and Rantanen each have 13 points in the .

Game 5 is Saturday in San Jose.