Avalanche beat Sharks 4-3 to even series at game apiece

Tyson Barrie scored the tiebreaking goal and assisted on two others, sending the Colorado Avalanche to a 4-3 victory over the San Jose Sharks Sunday night. 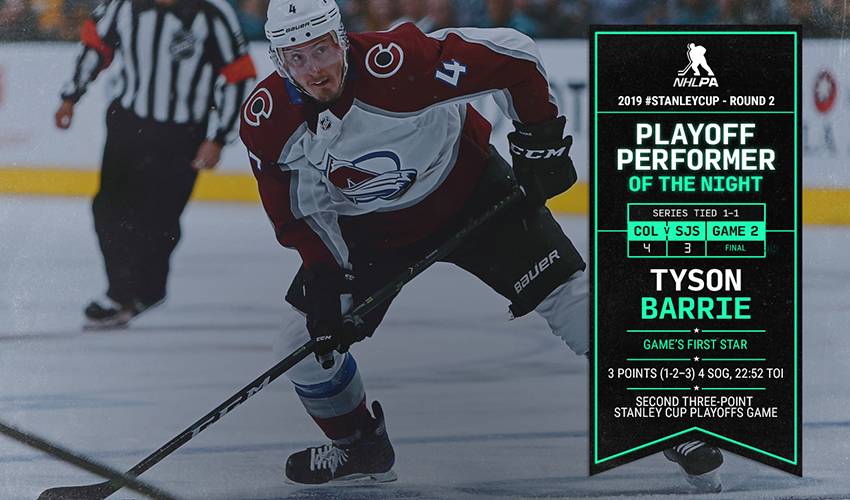 SAN JOSE, Calif. — Tyson Barrie scored the tiebreaking goal and assisted on two others, sending the Colorado Avalanche to a 4-3 victory over the San Jose Sharks on Sunday that tied the second-round series at a game apiece.

The Avalanche were in danger of falling into a 2-0 series hole when coach Jared Bednar reunited his top line by moving Mikko Rantanen up to play with Nathan MacKinnon and Gabriel Landeskog with his team trailing 1-0 in the second period.

The move led to a goal by Landeskog on their first shift together and another by Barrie later in the period to help Colorado bounce back from a 5-2 loss in the series opener.

Former Shark Matt Nieto scored in the third period and MacKinnon added an empty-netter to give Colorado its third victory in its past 24 games in San Jose. Philipp Grubauer made 31 saves.

Game 3 is Tuesday night in Denver.

The Avalanche turned the game around thanks to their top line that has been so dangerous all year. Landeskog got to the front the net to deflect a point shot from Barrie past Jones for the equalizer midway through the second.

The ice was tilted Colorado's way after that and the trio helped deliver again a couple of shifts later. Rantanen raced past Marc-Edouard Vlasic to negate an icing and create a scoring chance for Colorado. Jones made a good stop on Landeskog from in close but the puck went out to Barrie at the top of the faceoff circle and he beat Jones with a shot to the top corner to give Colorado a 2-1 lead.

The Sharks had a chance to tie it early in the third but Grubauer robbed Logan Couture from the slot with a glove save.

Shortly after, Nieto scored following a scramble in front of Jones after a turnover by Marcus Sorensen to make it 3-1 and give the Avalanche some breathing room.

Burns scored with a wrister from the top circle to make it a one-goal game with 4:34 to play.

But MacKinnon scored an empty-netter with 1:02 to play that made Burns' power-play goal with 10.9 seconds left moot.

The Sharks got off to a fast start as they looked to build on their 5-2 victory in the series opener. They looked like the quicker team early and appeared to have much more energy than they did Friday night when they were still recovering from a grueling seven-game series in the first round.

That paid off midway through the first when Kane beat rookie Cale Makar to the rebound of Burns' point shot and knocked it past Grubauer for his first goal since the playoff opener.

Burns, coming off a four-point performance in the opener, is enjoying much more space at the point than he did last round when Vegas played its forwards high in the zone to neutralize shots from the point from San Jose's potent .

Jones then continued his strong play late in the period when he made a sliding pad save to rob Nathan MacKinnon on a redirect. That led to a good chance for Kevin Labanc, who was stopped by Grubauer's glove save to keep it 1-0 San Jose after 1.

NOTES: MacKinnon and Rantanen each had assists to become the first Avalanche players to record a six-game point streak in the playoffs since Peter Forsberg had a seven-gamer in 2004. ... F Micheal Haley returned to the Sharks lineup after missing the past five games with a lower-body injury. Dylan Gambrell was scratched. ... San Jose captain Joe Pavelski (concussion) and F Joonas Donskoi (undisclosed) remain sidelined.