Roope Hintz scored twice and the Dallas Stars beat the St. Louis Blues 4-2 on Saturday in Game 2 to even the Western Conference semifinal series. 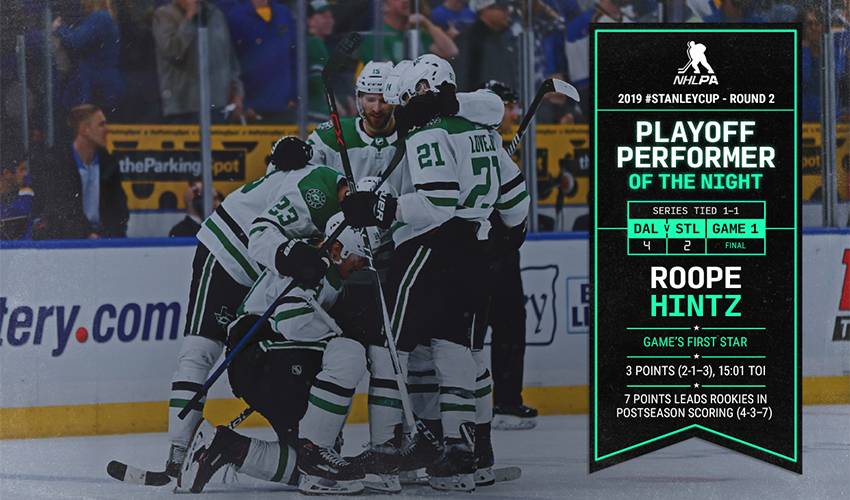 ST. LOUIS — Ben Bishop made 32 saves, Roope Hintz scored twice and the Dallas Stars beat the St. Louis Blues 4-2 on Saturday in Game 2 to even the Western Conference semifinal series.

Miro Heiskanen and Mattias Janmark also scored for the Stars.

Jaden Schwartz and Colton Parayko scored for St. Louis, and Jordan Binnington made 31 saves. The Blues had won three straight.

Game 3 is Monday night in Dallas.

Bishop bounced back after allowing three goals in 20 shots in a 3-2 loss in Game 1 on Thursday night.

Dallas scored three times in the opening 14:51 before Bishop took over.

Hintz, who added an empty-net-net goal with 3 seconds left, converted on a pass from Mats Zuccarello at 7:11. Heiskanen scored on a give-and-go with Hintz just over six minutes later.

The Blues answered 46 seconds later on Parayko's drive from the top of the circle.

Schwartz tipped in a shot from Parayko with 1:48 left in the third. Schwartz has a team-high five goals in the first two rounds.

Bishop, a Vezina Trophy finalist, improved to 11-3 when coming off a loss in the playoffs. He made big saves on Ryan O'Reilly and Oskar Sundqvist in the third period. Bishop used his arm to clear a shot from David Perron that hit the boards and bounced behind him in the second.

Bishop also held off the Blues' 6-on-4 advantage down the stretch.

NOTES: The series is the 14th between the teams. St. Louis has won seven. Dallas holds a 38-37 advantage in games. ... The Stars have killed 21 of 22 penalties in the playoffs. ... Binnington allowed two goals or fewer in his previous four games.

Game 3 is Monday night in Dallas.

By Steve Overbey, The Associated Press