After enduring a grueling seven-game series in the first round, the San Jose Sharks predictably needed some time to find their legs again at the start of round two. One key penalty kill proved to be just the kick start they needed. 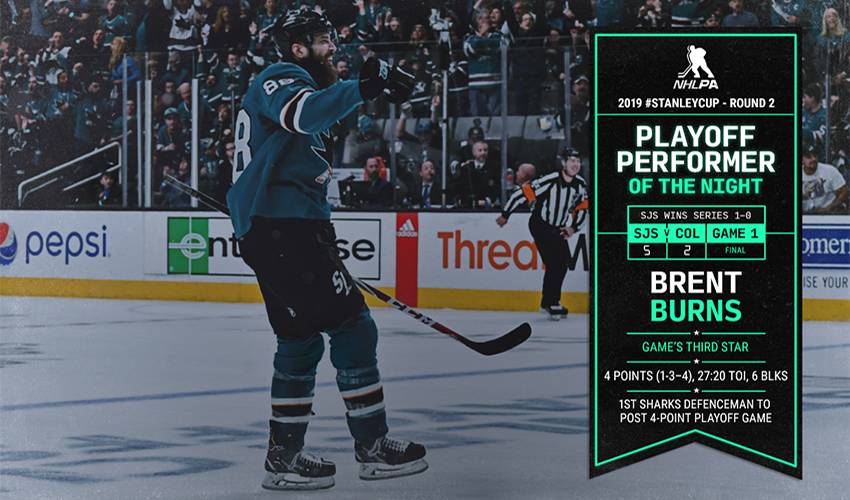 SAN JOSE, Calif. — After enduring a grueling seven-game series in the first round, the San Jose Sharks predictably needed some time to find their legs again at the start of round two. One key penalty kill proved to be just the kick start they needed.

Joe Thornton sparked a three-goal outburst in the second period after San Jose killed off a four-minute penalty, leading the Sharks to a 5-2 victory over the Colorado Avalanche in Game 1 on Friday night.

"The first period was a struggle to be honest with you," Thornton said. "I don't think we had too much early on but we kind of felt our groove as the middle of the game went on."

San Jose trailed 2-1 when Brenden Dillon was called for a high-sticking double minor. The Sharks managed to kill both penalties and then took over the game with a strong performance from the third line.

"That was a game-changer," coach Peter DeBoer said. "We needed that. We talked going into the playoffs and after the first round that our special teams were going to have to win us games. We won one with the power play last game and I thought our penalty kill was a big part of it tonight."

Thornton tied it midway through the period off a feed from Marcus Sorensen on a 2-on-1 rush shortly after the penalty was killed. Kevin Labanc, the third member of that line, gave the Sharks the lead with an impressive sequence that featured him deking Mikko Rantanen by playing the puck through his legs before scoring from the slot.

Brent Burns added the fourth goal late in the period when his shot from the boards deflected past Philipp Grubauer with Sorensen in front of the net. Thornton got an assist on the play, giving him 100 career helpers in the .

Gustav Nyquist scored the first goal for San Jose, Timo Meier added an empty-netter and Martin Jones made 26 saves to send the Sharks to their fourth straight win. Burns also had three assists.

"It can be tough obviously after a Game 7 like that, but we did a great job," Jones said. "We hung in there early in the game, and I really liked the job we did in the third. We were grinding them in the o-zone and we didn't really give them much."

Game 2 of the best-of-seven series is Sunday in San Jose.

Gabriel Bourque and Colin Wilson scored for the Avalanche, who were unable to carry over the momentum from a dominant first-round win against Pacific Division champion Calgary. Grubauer made 22 saves.

"We took five or 10 minutes off in the second and it cost us," captain Gabriel Landeskog said.

The intensity in the Shark Tank had dropped a bit from Tuesday night, when San Jose rallied from three goals down in the third period before winning Game 7 in overtime against Vegas.

While the Sharks needed back-to-back overtime games to knock off the Golden Knights, Colorado was resting with six days off after a five-game win over the Flames that sent the Avalanche into the second round for the first time since 2008.

The Avalanche had the edge early and capitalized with Bourque's goal on a rebound of Cale Makar's shot just 2:10 into the game.

Jones kept the deficit at one with a brilliant pad save against Carl Soderberg. The Sharks then got the equalizer when Logan Couture won an offensive zone draw to Burns, who into the slot and put a shot on net. Grubauer stopped it but Nyquist knocked in the rebound.

Colorado had a goal wiped off later in the period when replays showed Rantanen kicked the puck into the net, and Jones robbed Soderberg again on a breakaway late in the first.

Rantanen helped the Avalanche get on the scoreboard early in the second when he fed Wilson in the slot for a goal on the power play. But the Sharks took over from there.

"We played really good for the first 30 minutes and then it got away from us in the last 10 minutes in the middle of the second," Tyson Barrie said. "We just couldn't get it back. They took it to us at the end of the second period and they had the momentum."

NOTES: Thornton is the 100th player with 100 career playoff assists. ... Colorado D Samuel Girard returned after missing three games with an upper-body injury. ... Sharks F Dylan Gambrell made his playoff debut. He has played 11 regular-season games the past two seasons without recording a point.