Charlie Coyle tied it in the final five minutes of regulation and scored again with 5:15 gone in overtime on Thursday night to lead the Boston Bruins to a 3-2 victory in Game 1 of their Eastern Conference semifinal series. 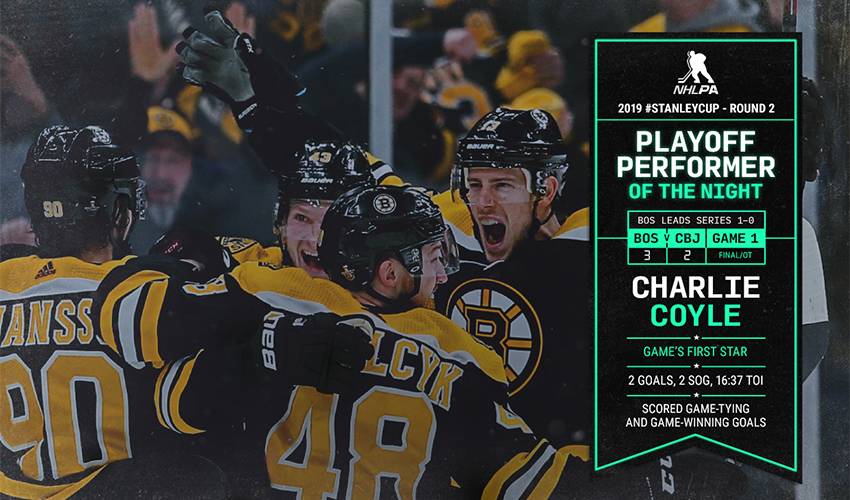 BOSTON — Charlie Coyle tied it in the final five minutes of regulation and scored again with 5:15 gone in overtime on Thursday night to lead the Boston Bruins to a 3-2 victory over the Columbus Blue Jackets in Game 1 of their Eastern Conference semifinal series.

Tuukka Rask stopped 20 shots for Boston, which took a 1-0 lead on Noel Acciari's short-handed goal in the first period, but then fell behind in the third after Brandon Dubinsky and Pierre-Luc Dubois scored in a span of 13 seconds.

Sergei Bobrovsky made 34 saves for the Blue Jackets, who swept the Presidents Trophy-winning Tampa Bay Lightning in the first round.

Game 2 is Saturday night in Boston before the best-of-seven series moves to Columbus for Games 3 and 4.

Robby Fabbri also scored and Jordan Binnington made 27 saves for the Blues, who had lost three of four to Dallas during the regular season.

It was Tarasenko's seventh career multi-goal game in the , tying him with Bernie Federko for second-most in franchise history.

Jason Spezza and Jamie Benn scored for the Stars. Ben Bishop made 17 saves.

Game 2 will be Saturday in St. Louis, before the series moves to Dallas for the third and fourth games of the best-of-seven series.