John Klingberg scored 17:02 into overtime and the Dallas Stars beat the Nashville Predators 2-1 to wrap up their first-round Western Conference playoff series in six games. 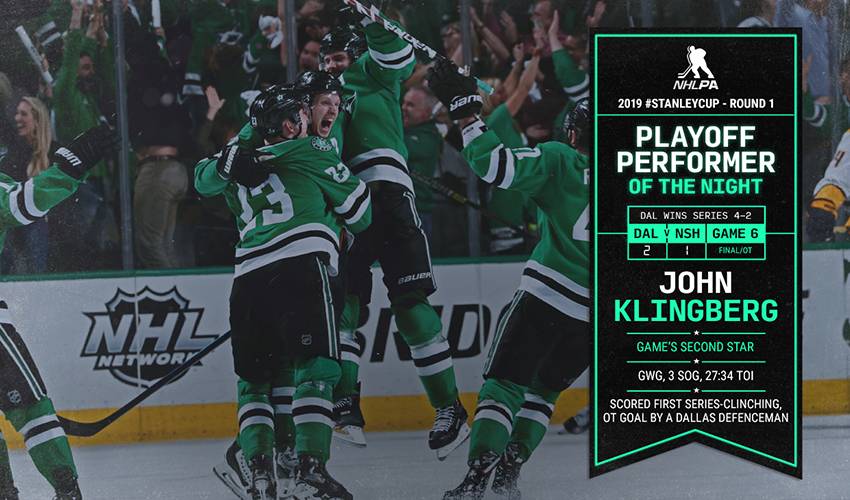 DALLAS — With a chance to clinch a playoff series at home for the first time in 11 years, the Dallas Stars needed overtime again. They didn't need quite as many this time, and won't have to go back to Music City.

John Klingberg scored from the left circle 17:02 into overtime after a cross-ice pass from Alexander Radulov, and the Stars beat the Nashville Predators 2-1 to wrap up their first-round Western Conference playoff series in six games.

"We wanted to close it out today and don't have to deal with going back there," said Klingberg, whose first goal of the playoffs came after five assists in the series. "We treated it like a Game 7."

The last time the Stars clinched a playoff series on home ice was in 2008, when they needed four overtimes for a 2-1 win over San Jose in a second-round series.

"To do it in overtime in that fashion, what an exciting time for our fans," Stars captain Jamie Benn said. "They were loud and brought a lot of extra energy for us in overtime."

The Stars, with rookie coach Jim Montgomery, won three consecutive games to close out the Predators. Dallas will play St. Louis in the second round of the playoffs, just like its previous appearance three years ago. The Blues, who have home-ice advantage this time, won that 2016 series with a Game 7 win in Dallas.

Ben Bishop, Vezina Trophy finalist, had a playoff career-high 47 saves for the Stars.

"Obviously our best player once again is Bish. He's just keeping us in the game," Klingberg said.

"We slowly, second period, third period and overtime got better and better," Montgomery said. "Obviously our best player was Bish. He was incredible."

Pekka Rinne, who won the Vezina Trophy last year as the NHL's top goalie, also set a career best by stopping 49 shots in his 89th career playoff game. That included an impressive pad save on Benn's shot just more than five minutes into the overtime period, when the Stars had a 14-8 advantage on shots.

"It's tough. It's a tough pill to swallow," Predators P.K. Subban said. "We came in here obviously wanting to take the series back to Nashville, and I thought we gave ourselves a great opportunity to do that."

Blake Comeau scored his first playoff goal for the Stars, tying the game at 1-1 in the second period. But he also had a tripping penalty with 1:53 left in regulation that put Nashville on the power play.

The Predators stuck to the series script and didn't score a goal. They didn't even get a shot on goal before the third period ended, or when finishing the final seconds with a man advantage to start overtime.

They were 0 for 4 on the power play in Game 6, and finished 0 for 15 in the series. They were the only one of the 16 teams that made the playoffs that didn't have a power-play goal in the .

"Even tonight, we had a lot of chances on the power play," Roman Josi said. "If we get a goal there, it's a different game."

Nashville had only one shot in the last nine minutes of regulation, and that doesn't count Calle Jarnkrok's shot at an angle over Bishop that ricocheted off the crossbar .

Colton Sissons had a breakaway for Nashville with about 11 minutes left that was denied by Bishop, just before Comeau and Andrew Cogliano had swipes against Rinne.

Austin Watson scored a goal for Nashville in the first period.

Dallas tied the game at 1 almost 5 minutes into the second period when Radek Faksa poked a puck away from Nashville and started skating the other way. Faksa then fed back to Comeau, skating through the slot for a wicked wrist shot into left side of the net.

That was right after Nashville's second line, now with Rocco Grimaldi, had three point-blank shots in 10 seconds turned away by Bishop.

With a team-high three goals in the series, the 5-foot-7 Grimaldi was moved up from the fourth line to the second line in the most significant lineup switch made by Laviolette going into the elimination game.

Rinne had glove saves on second-period shots by Tyler Seguin and Benn, who combined for 11 of their 23 shots the first two periods.

Dallas has some early giveaways, and a second one early by Jason Spezza that led to Nashville's goal.

Subban took a shot from high above the right circle, the puck hitting Brian Boyle in a crowd in front of Bishop and then knocked in by Watson for his first goal of the playoffs.

NOTES: Dallas is 31-40 in playoff overtime games, 1-1 in this series. Nashville, which failed to get out of the first round for the first time in four years, won Game 2 in overtime and is 8-9 in such games. ... Nashville's top line of Ryan Johansen, Viktor Arvidsson and Forsberg finished the series with a combined two goals and two assists. The No. 1 Stars line of Benn, Seguin and Radulov finished with seven goals and 11 assists. ... Dallas got two shots by Rinne that hit the post. In the opening seconds of the third period, Esa Lindell's ricocheted off the bottom of the post and back into play. Benn had a shot midway through the first period that hit higher on the same post and bounced up in the air, and Rinne somehow got his stick on the puck and knocked it away.

Dallas will play St. Louis in the second round of the playoffs.