Mikko Rantanen scored on a slap shot 10:23 into overtime after tying the game with a goal late in regulation as the Colorado Avalanche rallied for a 3-2 win over the Calgary Flames. 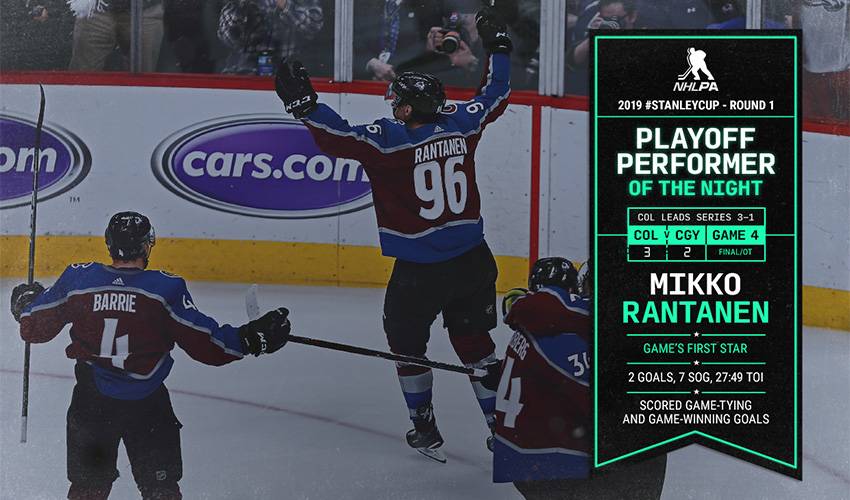 DENVER — Mikko Rantanen scored on a slap shot 10:23 into overtime after tying the game with a goal late in regulation and the Colorado Avalanche rallied for a 3-2 win over the Calgary Flames on Wednesday night to take a 3-1 lead in the teams' best-of-seven series.

Moments after weathering a penalty, Carl Soderberg got the puck and sent a pass to Rantanen, who lined a shot past Mike Smith before being mobbed by teammates.

Colorado trailed 2-0 in the third period, with J.T. Compher starting the comeback on a rebound and Rantanen tying it on a power-play goal with 2:50 left.

Elias Lindholm and Derek Ryan had goals for the Flames, the top seed in the West. They face a must-win scenario when the series returns to Calgary for Game 5 on Friday. The Flames are trying to avoid a similar fate as Tampa Bay, the No. 1 seed in the East who lost to Columbus in the first round.

Philipp Grubauer stopped 35 shots, including one in OT with his left pad while sprawled on the ice.

The 37-year-old Smith appeared to take a skate to his leg when Avalanche forward Colin Wilson slid into him in the first period. Smith was briefly checked out before settling into a groove.

Grubauer had the biggest save of the night early in overtime while down on the ice and Mikael Backlund with the puck on his stick down low. Grubauer waited a moment and then slightly raised his left pad just as Backlund shot it. The puck hit the middle of Grubauer's pad.

Compher had a breakaway in overtime and Smith gambled by coming out of the net to challenge him. Compher got around Smith, only to send the puck wide. Later, Colorado withstood a penalty on Ian Cole for a delay after sending the puck out of play.

Calgary was seemingly in control after Ryan extended the lead to 2-0 with 13:02 remaining after batting in a rebound. Just over a minute later, Compher sent a shot past Smith following a scramble in front of the net. Then, Rantanen tipped in a shot to tie it up. The Avalanche had a chance to win it in regulation when the Flames took a delay of game penalty, but couldn't capitalize.

Lindholm scored his first goal of the series at 3:25 of the second period. His goal arrived just six seconds after Erik Johnson took a penalty for high sticking. The Flames have at least one power-play goal in all four contests.

Shortly after Lindholm's goal, Smith made a diving save with his left arm on a shot from Avalanche captain Gabriel Landeskog. And shortly after that, Landeskog clanged a shot off the post.

Smith withstood a barrage of shots in the first period — plus a crash with Wilson, who wiped out and slid skate-first into Smith. They both ended up on the ice as trainers came out to check on Smith.

This certainly caught the attention of Colorado: Columbus upsetting top-seeded Tampa Bay in an Eastern Conference first-round series. The Avs are hoping to follow suit against the Flames.

"It doesn't happen often," Rantanen. "In the NHL, it can happen. The differences are not huge."

Back to Calgary for Game 5 on Friday.