Zdeno Chara made history Wednesday night, helping the Bruins avoid falling into a deep playoff hole in the process. 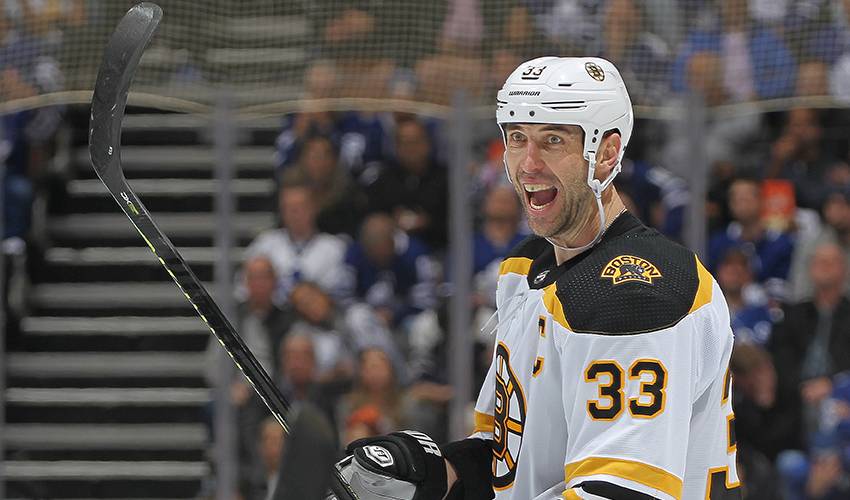 TORONTO — Zdeno Chara made history Wednesday night, helping the Bruins avoid falling into a deep playoff hole in the process.

The Bruins captain's shot from the point at 5:39 of the third proved to be the winning goal in Boston's 6-4 victory over Toronto, evening their best-of-seven first-round playoff series at two games apiece.

At 42 years 30 days, the big Slovak becomes the oldest defenceman in NHL history to score a winning goal in the Stanley Cup playoffs. Mark Recchi (43 years 125 days) and Teemu Selanne (42 years 301 days) are the only older players — both forwards — to score winners in the post-season.

Chara also became the second-oldest defenceman — behind Chris Chelios (45 years 86 days when he scored for Detroit in the 2007 post-season) — to get a goal in the playoffs.

"He's a true professional. He's a great leader," said Bruins coach Bruce Cassidy. "Still a really solid hockey player. They're trying to find ways to expose him and he's trying to adapt to the new NHL and has. There's a reason why he's still playing and still effective.

"Not only is he hard, but he's smart. He's a very intelligent man and has been able to figure out a way to keep playing this game and be effective."

Added forward Patrice Bergeron: "He's been our rock back there for quite a while now. He just keeps doing it."

The Leafs have tried to target the big man but as Bergeron noted "he's going to give it right back."

The six-foot-nine 250-pound Chara was a force all night, his stick extended and his lengthy frame looking for something to bruise. He banged Leafs wunderkind Mitch Marner off the bat and led the Bruins with five hits.

Then, in the third, he paused on the blueline to await more traffic in front of Freddie Andersen before uncorking a shot that gave Boston a 5-2 lead.

"I thought I had a little more time that usual," Chara, who finished the evening a plus-three, said simply.

Boston gave up goals to Auston Matthews and Travis Dermott before sealing the deal with an empty-net goal.

"He's the backbone of this team," forward Brad Marchand, who had a goal and two assists, said of Chara. "The way he conducts himself and carries himself and consistently shows up in the big moments, he did it again tonight. That's why he's our captain and our leader.

"It's awesome having him back there leading the way. It makes it very easy to follow knowing we have a guy like him protecting the group and leading the way. He's a Hall of Famer. So we're lucky to have him"

Chara, who topped the Bruins with 24 minutes 12 seconds of ice time, was happier about the win than entering the record book with his goal.

The Bruins revamped their top line with Danton Heinen replacing David Pastrnak alongside Marchand and Bergeron.

Pastrnak played with David Krejci and Jake DeBrusk but Cassidy restored Pastrnak to the top line early in the second period. That produced two Pastrnak goals in 95 seconds.

Machand, Bergeron and Pastrnak combined for six points on the night, matching the three goals and three assists they collected in the first three games of the series.

Earlier Wednesday, Bergeron was announced as a finalist for the Selke Award for a record eighth year in a row, along with Ryan O'Reilly of the St. Louis Blues and Mark Stone of the Vegas Golden Knights. Bergeron is a four-time winner of the award which honours defensive play by a forward.

John Moore and Marcus Johansson returned to the lineup, replacing Steven Kampfer and Karson Kuhlman. Johansson missed Games 2 and 3 with an illness. Moore had missed nine games with an upper-body injury.

Game 5 is Friday at TD Garden.