The Columbus Blue Jackets were clinging to a 4-3 lead and the Tampa Bay Lightning's high-scoring stars were swarming around Sergei Bobrovsky, as the clock ticked down in what would be a history-making playoff game. 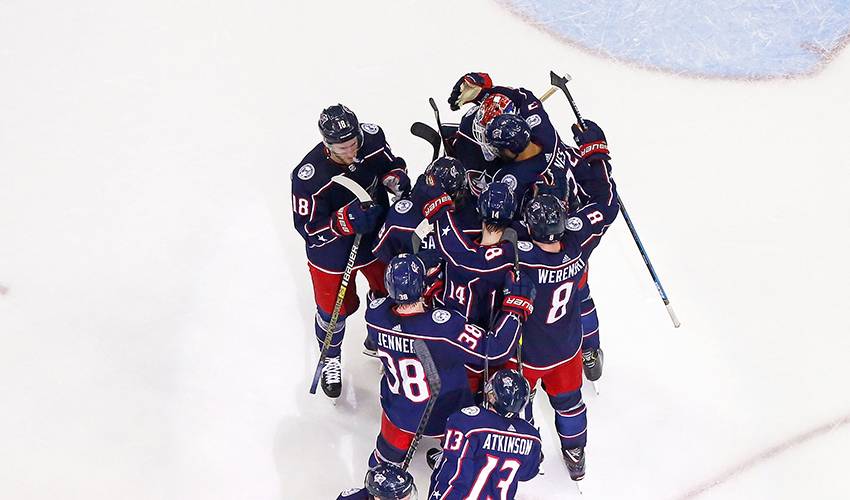 COLUMBUS, Ohio — The Columbus Blue Jackets were clinging to a 4-3 lead and the Tampa Bay Lightning's high-scoring stars were swarming around Sergei Bobrovsky, as the clock ticked down in what would be a history-making playoff game.

The Blue Jackets' goaltender stood tall, as he had the entire playoff series, turning away dangerous shots by Erik Cernak and Cedric Paquette in the last five minutes. The Lightning pulled their goalie late, and the Blue Jackets opened the scoring spigot on the way to a 7-3 win and shocking four-game sweep of the NHL's best team.

"It's so much fun to play in this kind of atmosphere," said Bobrovsky after the Blue Jackets won in front of a raucous home crowd that had been waiting 18 years for the team to win a playoff series. "You feel the energy, you feel that atmosphere, you know? It's great. It gives you more energy when you win."

Not only did Columbus win a playoff series for the first time in five tries , it did so in dominating fashion. The Blue Jackets ousted a team that had put together one of the most prolific scoring lineups ever, a team whose 68 regular-season wins tied for the most in NHL history.

As the seconds ticked off what had turned into a rout because of empty-net goals, the Nationwide Arena crowd that had been standing for the entire third period roared even louder, and the players celebrated wildly, spilling from the bench onto the ice. Winger Cam Atkinson even got a cut on his chin during the joyous melee.

"What an experience in that series," said Matt Duchene, who was acquired at the trade deadline along with winger Ryan Dzingel from Ottawa for the playoff push. "I have never played in front of a crowd like that. Insane. It's pretty special what we just did. We're going to enjoy it, but we've got to carry this momentum forward now."

Columbus, which didn't secure an Eastern Division playoff spot until the 81st game, advances to play the winner of the Boston-Toronto series, which the Maple Leafs lead 2-1.

Twelve Blue Jackets scored in the series, but Bobrovsky, who had struggled in three previous playoff series with Columbus, was the star .

He will be an unrestricted free agent after the season and has, so far, refused to re-sign with the team. He also has come under criticism at times from coach John Tortorella through an erratic season, but the former Vezina Trophy winner never withered.

"He's not crazy how I've talked about some of the situations he's gone through, but it's my job to hold people accountable," Tortorella said. "I'm thrilled that he's answering."

Columbus neutralized Lightning stars Nikita Kucherov and Steven Stamkos with a smothering fore check that clogged scoring lanes and often turned into opportunities at the other end . When those two finally got on the scoresheet Tuesday, it was too late.

Nineteen-year-old Alexandre Texier, who was playing in the Finnish league last month, opened the scoring Tuesday with his first NHL goal , then added one of the empty-netters.

The Blue Jackets fell behind 3-0 in the first period of the opening game in Tampa, but rebounded to win that one 4-3. A 5-1 rout followed in Tampa, and then a 3-1 win in Columbus on Sunday night set up the sweep.

"I'm happy for them because they played as a team, and they had a tremendous amount of will," Tortorella said. "That's mental, That's not a talent, that's not physical skills, that's mental toughness. And that's what I'm thrilled about."

The Lightning were the highest-scoring team in the league by 20 goals this year and finished with 30 more than the Blue Jackets, who as the eighth seed were given little chance of winning the opening round.

"In the end, we just couldn't find our game," Tampa Bay coach Jon Cooper said. "That was it. It had been with us all year, and for six days in April we couldn't find it. And it's unfortunate because it puts a bluntness on what was one hell of a regular season."