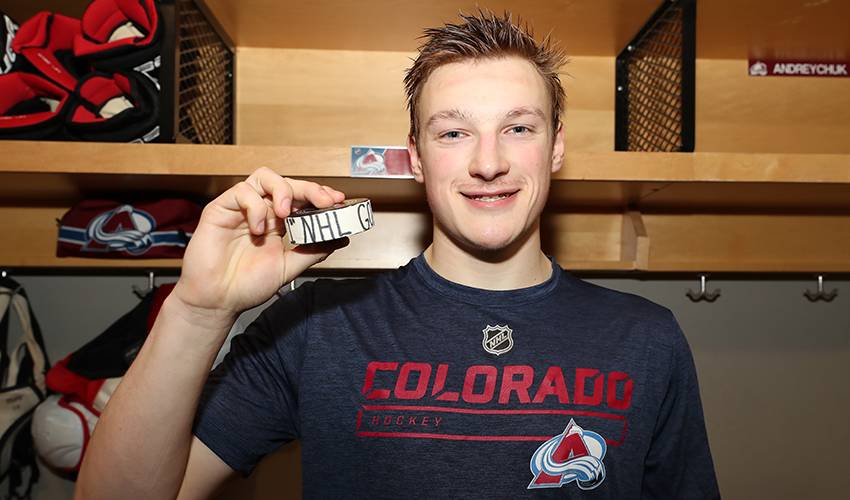 One shot on net, to be precise.

The newly signed Colorado scored a playoff goal in his NHL debut during Game 3 on Monday night as the Avalanche cruised to a 6-2 win over Calgary, his childhood team.

Makar became the seventh player in NHL history and first to score a goal while making his debut in the Stanley Cup playoffs, according to the NHL communications department. His goal ended up being the game-winner to help the Avalanche grab a 2-1 lead in the first-round series. Game 4 is Wednesday night in Denver.

"He was good. Right from the get-go he was involved," Colorado coach Jared Bednar said. "He looked calm, cool, collected."

On his goal, Makar zipped through the neutral zone, called for a drop pass from Nathan MacKinnon and beat Flames goaltender Mike Smith with a wrist shot late in the first period to make it 3-0.

Quickly skating over to congratulate Makar was Avalanche captain Gabriel Landeskog. Celebrating in the crowd were Makar's parents.

"It's a total surreal, pinch-me moment all wrapped into one. It's insane," Gary Makar told The Associated Press. "Couldn't be more excited."

The 20-year-old Makar signed a three-year deal with Colorado on Sunday — a day after his college season ended when Massachusetts lost in the Frozen Four championship game to Minnesota Duluth.

Wearing No. 8, Makar jumped on the ice early in the first period and was given a loud cheer. Each time he did anything, the crowd cheered.

"You just shake your head," his father said. "The crowd, every time he gets the puck, guys, he's just a kid. No expectations."

Growing up in Calgary, Makar and his family were big Flames fans. He joked they are "fully Avs converted now."

"It's a weird feeling going up against the team you grew up loving, but my allegiance lies with the Colorado Avalanche now," Makar said. "It's going to be an interesting feeling."

It may be time to update the apparel, though.

"We've got a lot of Flames fans in our family and we probably own everything they make, merchandise-wise," his father said.

Makar, the fourth overall draft pick by Colorado in 2017, had 49 points for UMass and won the Hobey Baker Award as college hockey's top player. He practiced Monday morning with the Avalanche for the first time. He made an immediate impression, too.

"He's so smooth and so agile," MacKinnon said. "You can kind of tell why he was so dominant in college.

"It's not easy to come into this atmosphere. I don't know how much he's going to play or whatever. But he looks great out there."

As for nerves, Makar was doing his best to keep them at bay.

"I'm just going to go out there and if I play will try to do my thing," Makar said. "Just go out there and do what they need me to do. I'll provide if I have to and hope to be steady on the as well."