Mitch Marner scored twice, including one on a short-handed penalty shot, as the Toronto Maple Leafs downed the Boston Bruins 4-1 on Thursday to grab a 1-0 lead in their best-of-seven first-round playoff series. 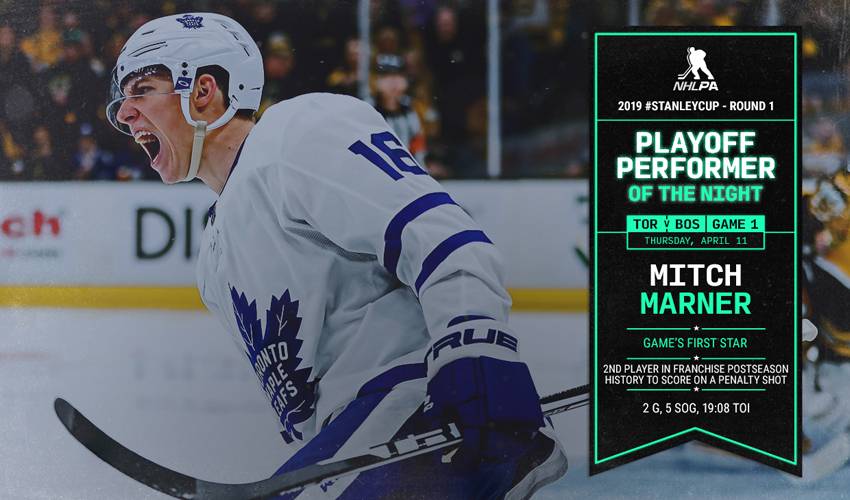 BOSTON — Mitch Marner scored twice, including one on a short-handed penalty shot, as the Toronto Maple Leafs downed the Boston Bruins 4-1 on Thursday to grab a 1-0 lead in their best-of-seven first-round playoff series.

William Nylander and John Tavares, into and empty net, had the other goals for Toronto, which got 37 saves from Frederik Andersen.

Patrice Bergeron replied for Boston. Tuukka Rask stopped 29-of-32 shots for the Bruins.

"We know we're a fast team in this locker room," Marner said. "When we play right, it's hard to stop us."

The victory was the first for the Leafs in a Game 1 since April 9, 2003, against the Philadelphia Flyers.

Game 2 goes Saturday night at TD Garden before the series shifts to Scotiabank Arena on Monday and Wednesday.

Boston, which won three of the teams' four meetings in the regular season, beat Toronto in seven games at the same juncture of the last spring's playoffs — including a four-goal third period in the decider that turned a 4-3 deficit into a 7-4 win.

Tied 1-1 after 20 minutes and with his team down a man Thursday, Marner was awarded a penalty shot after being taken down on a breakaway by Jake DeBrusk.

The slick Toronto winger moved in on Rask and buried a deft move to the forehand for his second goal of the night at 2:47 of the second period.

Marner, who scored the Leafs' first goal on a penalty shot in the playoffs since Mats Sundin in 1999, led Toronto with nine points in last year's series with the Bruins.

Boston nearly tied it moments later, but Andersen stopped Charlie Coyle before the Bruins centre rang a shot off the post that stayed out.

Auston Matthews then found iron at the other end, but the visitors went up 3-1 with 1:35 left in the second when Nylander fired between Rask's pads on another break after taking a terrific stretch pass from Nazem Kadri.

Rask stopped Tavares on yet another breakaway before getting a toe on a shot from Matthews just as the buzzer sounded for the second intermission.

Joakim Nordstrom had a great chance for Boston seven minutes into the third, but the puck just trickled wide of Andersen's post.

Boston continued to push, but Andersen and the Leafs held their nerve before Tavares iced it into an empty net for Toronto's first victory in a Game 1 in 5,846 days — when Marner was five years old.

Following a tentative start for both teams, the Bruins went ahead on a power play at 9:31 of the first after Nylander took an undisciplined high-sticking penalty immediately after being on the receiving end of a big hit from Connor Clifton.

Brad Marchand used a subtle delay in the offensive zone before sliding a pass through the seam to Bergeron, who had a wide-open net as the Leafs' penalty killers were caught puck-watching.

Boston's top line of Marchand, Bergeron and David Pastrnak combined for 30 points in last spring's series, including 20 in the first two games.

Andersen, who had a save percentage of just .896 in last year's first round and an .881 mark over his final 10 games of 2018-19, made a big glove stop on Danton Heinen later in the period after Jake Gardiner turned the puck over in front of his own net to set the table for Marner's equalizer.

Jake Muzzin's initial point shot was tipped by Marner in the shot before bouncing to the Leafs' winger, who slapped a shot that just got over the line through a crowd in the Bruins' crease at 16:44.

The Leafs rocketed out of the standings early this season, but were only 10-10-5 over their final regular-season 25 games and registered just four wins over the schedule's final month (4-7-3).

Toronto had its doors blown off in the first two games in Boston last spring, getting outscored 12-4 in falling behind 2-0 in the series. The Leafs would trail 3-1 heading back to TD Garden, but won two straight to force a Game 7 where they led 4-3 heading into the third before allowing four goals in the third period of a 7-4 loss.

Notes: Garret Sparks dressed as the Leafs' backup goalie with Michael Hutchinson away from the team following the birth of his first child. ... Toronto holds an 8-7 edge in all-time playoff series between the franchises, but Boston has won the last five. ... Leafs winger Patrick Marleau played in the 185th playoff game of his career. ... Game 5, if necessary, would be back in Boston on Monday.