Dale Tallon and Joel Quenneville are together again, and the Florida Panthers are ready for them to recreate their magic. 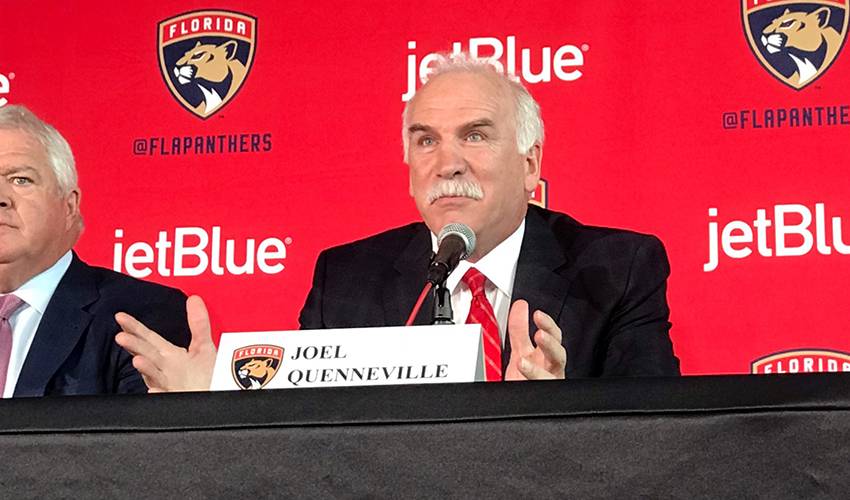 SUNRISE, Fla. — Dale Tallon and Joel Quenneville are together again, and the Florida Panthers are ready for them to recreate their magic.

Quenneville — who is second on the NHL's all-time victory list — was hired Monday to coach the Panthers, who started their with a splash. It's also a reunion, after Tallon hired Quenneville to coach Chicago in 2008 and wound up watching him win three Stanley Cups there in a six-year span.

Tallon wasn't there for those Chicago titles; he was fired less than a year after delivering Quenneville. Finally, now, he gets a chance to work with Quenneville again.

"Fate is a wonderful thing in my life," Tallon said. "It's like a blessing for me. This is a blessing. There are a lot of coaching jobs available. We wanted to get it done because he's a popular guy and a lot of teams out there would love to have him as their coach."

Quenneville's hiring was announced less than 36 hours after the Panthers' season ended. Players were gathered Monday for exit interviews, an annual end-of-season rite. This time, they stuck around to meet the new boss, too.

"I believe this team is close to winning," Quenneville said. "I was fortunate, luckiest guy in the world when I walked into the Chicago situation there — a team ready, sitting on go to win. I feel the same here now."

It's a bold move for the Panthers, who paid big to get Quenneville — he was owed $6 million for the 2019-20 season by the Blackhawks and it's believed this deal keeps him in that salary range. It also represents a serious shift in the organization's thinking, considering five of the last six coaches hired by Florida were first-time head coaches.

Not Quenneville. His 890 wins are second only to Scotty Bowman in NHL history. He's one of 11 coaches with three Stanley Cups.

Florida desperately wants to see him win a fourth.

"His record is impeccable," Tallon said. "I think this is going to be a complete shot in the arm for the whole organization, on and off the ice. This is big time. This is a major step forward for our franchise."

Quenneville replaces Bob Boughner, who was fired Sunday after two seasons. Tallon wasn't looking to fire Boughner, and made clear that he still holds him in high regard.

But when Tallon read an article that suggested Quenneville was itching to coach again, the wheels started spinning. Tallon — a stickler for rules, so he didn't directly go to his friend Quenneville first — started by going to Panthers owner Vincent Viola to discuss the option and plot strategy. He then obtained permission from the Blackhawks to talk to Quenneville, who was fired by Chicago in November and was still under contract.

Then the sales pitch started. Late Sunday, an understanding was reached. Monday morning, the deal was announced.

"This doesn't come around very often, opportunities like this," Tallon said. "We had to think about what's best for the franchise long-term. And this is a fabulous day for our franchise."

Quenneville going to Florida makes sense on so many levels. He likes golf. He's big into horse racing, as is Viola. He and Tallon have stayed close.

"Words can't even express how excited our family is to come down to South Florida," Quenneville said. "This is where we wanted to be."

Aleksander Barkov, Jonathan Huberdeau, Evgeni Dadonov and Mike Hoffman all had big scoring years, and Vincent Trocheck has emerged as a true leadership voice. Goaltender Roberto Luongo, who is considering a return, is another clear leader. Florida plans on being super-aggressive on July 1 to find free agents who will immediately shore up a porous . Playing for Quenneville will be a selling point for those free agents.

"I don't want expectations to be, 'Oh, let's fight for a playoff spot,'" Tallon said. "I want to be the best. Vinnie's given us that opportunity. He wants to win, I want to win, and now this sends the message worldwide: This team means business. And we're going to go after it."

When Tallon hired Quenneville in Chicago, the Blackhawks hadn't won a playoff series in 11 years. Quenneville turned things around in a hurry.

Tallon is betting he can do it again.

"Me and Q," Tallon said, "we're on the back nine and we want to finish it off in style."