The hockey community is remembering Hall of Famer Ted Lindsay, who died Monday at age 93. 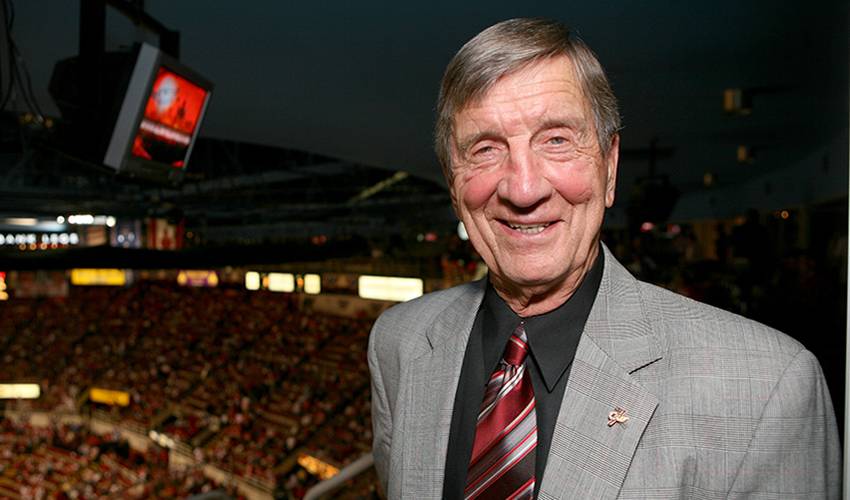 The hockey community is remembering Hall of Famer Ted Lindsay, who died Monday at age 93. Known as "Terrible Ted" for his competitiveness and grit on the ice, Lindsay helped the Detroit Red Wings win four Stanley Cups (1950, 1952, 1954, 1955) and was instrumental in the formation of the first NHL players' union. Here is a look at some of the reaction from the hockey world:

"On the ice he played with an edge, and off the ice he wanted to represent the players to make it a better working environment. When you see the statistics and you talk to anybody that played the game, watched the game ... he was a great, great player. I got to know the man. And he was a great man." — Ken Holland, Red Wings general manager and executive vice-president

"A true trailblazer in seeking to improve conditions for all players, Ted was instrumental in organizing the original Players’ Association in 1957. All players, past, current and future, are in his debt. All those who have, and will follow him into the NHL, enjoy improved rights and benefits in large part due to the efforts he made." — Donald Fehr, National Hockey League Players' Association executive director

"The National Hockey League mourns the passing and celebrates the incomparable life of the legendary Ted Lindsay. One of the game’s fiercest competitors during his 17-season NHL career, he was among its most beloved ambassadors throughout the more than five decades of service to hockey that followed his retirement. In Detroit, he was a civic icon." — Gary Bettman, NHL commissioner

"'Terrible Ted' was one of the nicest men in hockey. Every player should be thankful for his courage to create the Players Association, which has grown into partnership between the players and owners of the NHL. He was a true champion on and off the ice and will be deeply missed." — Wayne Gretzky, all-time NHL leading scorer and member of the Hockey Hall of Fame.

"We used to walk by this photo (of Lindsay holding the Stanley Cup) in Olympia room at Joe Louis Arena every day. It served as inspiration and brought many of Ted's stories to life. If they play pick-up hockey in heaven, I'd like to think everyone is nervously doing up their chinstraps today. You were a giant, Ted." — Brendan Shanahan, Toronto Maple Leafs president and former Red Wings star.

"So sorry to hear about the passing of Ted Lindsay. He was a giant for our game as player, GM, coach and even bigger for how he stood up for what was right. We are all indebted to him for his contributions to the NHL." — Marc Crawford, Ottawa Senators interim head coach

"Saddened to hear Ted Lindsay has passed. Had the honour/privilege in the Red Wings locker room ('93-'01) to have my stall beside his. Ted's presence helped teach me about having true respect for the game and accountability to those who played it before us. You were a great man, 'Terrible.'" — Aaron Ward, former Red Wings defenceman

"If you played in the NHL and you don't fully understand what this man has done for your quality of life, then spend the rest of the day reading up on him please. Thank you Mr. Lindsay for caring about the players." — Kelly Chase, former NHL player

"That rare combination when great athleticism and vision intersect in the same person. A transformational figure in the evolution of this great game. RIP Ted." — Stu Grimson, former Red Wings enforcer