(Terrible) Ted Lindsay, a hard-nosed star winger who formed Detroit's famed Production Line with Gordie Howe and Sid Abel, has died. He was 93. 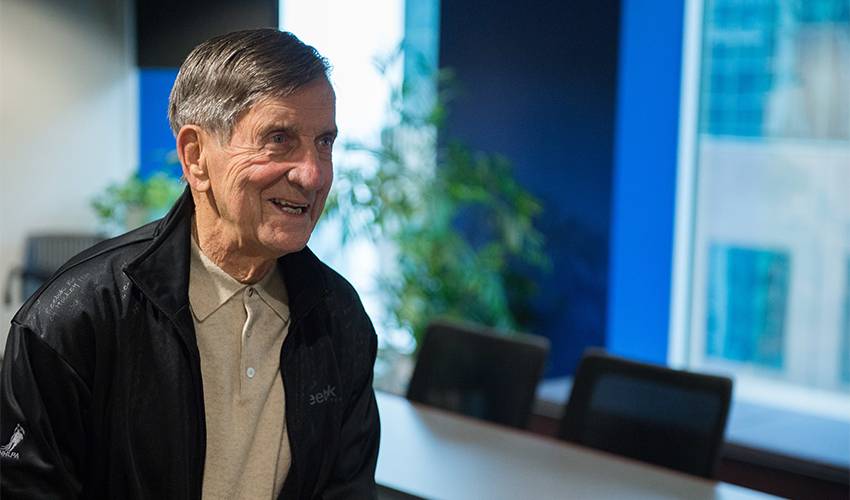 Lew LaPaugh, president of the Ted Lindsay Foundation, which raises money for autism research, said Lindsay died at his home in Michigan.

Lindsay's impact on hockey was felt on and off the ice. A nine-time all-star who was inducted into the Hall of Fame in 1966, Lindsay is considered one of the greatest left-wingers in the game.

His influence in hockey is still felt today. Lindsay spearheaded the drive for a players' association and was its first president. The NHL Players' Association, formally ratified as a labour organization in 1967, honoured him in 2010 by renaming its MVP award the Ted Lindsay Award trophy.

Lindsay normally helps hand out the trophy on NHL awards night. But he was absent June 20, 2018, in Las Vegas when the award went to Edmonton's Connor McDavid for the second straight year.

"Ted couldn't be here tonight, but he's sure watching at home," said co-presenter Eric Lindros. "We know he's proud of all three of our finalists."

McDavid paid tribute to "Mr. Lindsay" after receiving the award.

"What he's meant for the players, what he's done for the (NHL) PA, we wouldn't be here without him. So thank you to him."

While just five foot eight and 160 pounds, Lindsay cast a huge shadow on the ice. The native of Renfrew, Ont., was hard-working, skilled and able to antagonize opponents.

"There's only one reason I played. That was to win," he told The Canadian Press in a March 2015 interview. "And also to play better the next day than I did the last game."

Beloved in Detroit, he was seen as a villain everywhere else in the NHL. He welcomed their boos.

Howe said Lindsay played the game "like a holy terror."

"I hated every guy I played against," Lindsay said in an interview for the "Legends of Hockey" documentary series. "And I must say that the opposition, whether it be Toronto, Montreal, New York, Boston or Chicago, they felt the same way."

"It's wonderful way to play hockey," he added. "No coach ever has to get you up."

He is credited with starting the tradition of players skating around the ice with the Stanley Cup after winning it. Lindsay did it spontaneously after the Wings won the Cup in 1950 so fans could share in the experience.

Lindsay spent the first 13 years as a Red Wing before being exiled to Chicago, where he played three seasons. He left hockey after the 1959-60 season but returned in 1964 for one more season in Detroit, then coached by former linemate Abel.

"The greatest life in the world," Lindsay said.

He never took a night off. If he felt he had had an off night, he would go at it twice as hard the next game.

"I wanted to prove myself, but also the people I cheated the night they watched me because I wasn't playing very well," he said.

Lindsay never forgot that the fans paid his salary, not the team owners. He wished some of today's athletes shared that view.

"I see some guys some nights, they're cheating the public," he said.

Lindsay's face bore the scars of many an on-ice confrontation and it had been some years since his nose was straight. He reckoned he had more than 700 stitches in his face.

He used to tell the doctor: "just put a couple of stitches in and I'll come in after the game and you can finish up the job."

"I had a lot of voluntary plastic surgery," he added.

"He's got one of those faces that holds about three days of rain," former referee Red Storey once said.

Lindsay never lost his edge. Even in his late 80s, he was less than impressed when he saw NHLers chat at a faceoff. But he marvelled at the size of today's players as well as their passing skills and he remained a hockey fan, often visiting the Wings dressing room.

"On the ice he played with an edge, and off the ice he wanted to represent the players to make it a better working environment," Red Wings general manager and executive vice-president Ken Holland said Monday at a meeting of NHL general managers in Boca Raton, Fla.

"Any time I was around Ted it was an honour. When you see the statistics and you talk to anybody that played the game, watched the game ... he was a great, great player. I got to know the man. And he was a great man."

Lindsay had an aorta valve replaced in April 2014 but soon returned to the gym to continue his workout regimen. He credited wife's Joanne's cooking as another reason for his longevity.

The NHL in the '50s belonged to Detroit and Montreal. The Wings won the Cup four times and finished first in the league seven times while the Canadiens had three-first-place finishes and five Cups.

"Every building that he went (to), they hated his guts," former Habs great Bernie (Boom Boom) Geoffrion told "Legends of Hockey." "For his size he never backed down to nobody, nobody I can recall. He would fight anybody. ... And he could put the puck in the net, and he could shoot and he could skate."

Lindsay struck a nerve wherever he played. But for every insult, there was a compliment or two.

"I hated that S.O.B. ... There were none any meaner," said former Maple Leaf Howie Meeker.

"Never had a bad shift," he added.

Former Bruins player Milt Schmidt, called Lindsay "probably was one of the most hated players in the National Hockey League."

"But every franchise would have given their right arm for Ted Lindsay."

After retiring, Lindsay served as a TV commentator and analyst before serving as general manager of the Red Wings from 1977 to 1980 and interim coach in 1980-81. His return to the Wings was trumpeted under the slogan "Aggressive hockey is back in town."

Lindsay's love affair with the game never wavered. Asked recently if he still watched the game, he said with a laugh "Does the sun come up in the morning?"

Born July 29, 1925, in Renfrew, Ont., Robert Blake Theodore Lindsay grew up in the gritty mining town of Kirkland Lake. The youngest of nine children, six boys and three girls, he said "I learned how to fight young."

His father Bert, a gold miner, was a goaltender for several teams in the National Hockey Association, a precursor to the NHL.

His first pair of skates were hand-me downs from his neighbour. They were too big but Lindsay made them work until his dad could afford to buy him a pair that fit.

Lindsay grew up listening to the Red Wings on Detroit radio station WJR. His favourite players were tough customers like defenceman (Black) Jack Stewart — "the roughest son of a gun you'd ever want to meet," according to King Clancy — and Jimmy Orlando.

Lindsay went to Toronto to play for the St. Michael's College junior team, showcasing a wide array of skills from scoring to fighting.

The Maple Leafs heard word of a talented youngster at St. Mike's but Lindsay was injured when they came to see what the fuss was about. A player named Joe Sadler had a good game that night and the Leafs, thinking he was the one being touted, put him on their negotiation list.

That opened the door to Detroit with chief scout Carson Cooper making an offer.

Lindsay, who also helped Oshawa win the Memorial Cup final against the Trail Smoke Eaters, showed his smarts off the ice by signing a two-year deal with a $2,000 bonus that guaranteed he would play at least 40 of the Wings' 50-game schedule and not go to the minor leagues.

In 1944, with many players serving overseas in the military, Detroit was rebuilding so Lindsay got his chance to play.

It was the era of the Original Six, with rivalries that ran deep.

"I was gifted with a competitive spirit, I hated to lose," Lindsay said in 2010. "If it meant running over you, through you, spearing you, whatever it took, I was there for one reason and that was to win. If that made me terrible, I guess I deserved that title."

Howe said Abel always knew where his wingers were and was able to anticipate plays. But the trio also worked tirelessly in practice to hone their skills as a unit.

It was an era of puck control and the Production Line excelled.

After Abel retired, Lindsay and Abel played with a series of centres including Alex Delvecchio and Norm Ullman.

Lindsay's efforts to form the players' association resulted in Detroit GM Jack Adams trading him to lowly Chicago before the 1957-58 season. After three seasons, he quit hockey and focused on his business interests in the automotive industry but he remained active, sometimes practising with the Wings.

Lindsay's No. 7 was retired by the Red Wings in November 1991 and in 2008, the team honoured him with a statue on the Joe Louis Arena concourse.

He was inducted into Canada's Sports Hall of Fame in 2002.

In signing his first contract, Lindsay said he hoped he would be good enough to play in the NHL.

"And I hoped I would be a credit to the game."

— With files from Canadian Press hockey writer Joshua Clipperton and The Associated Press.