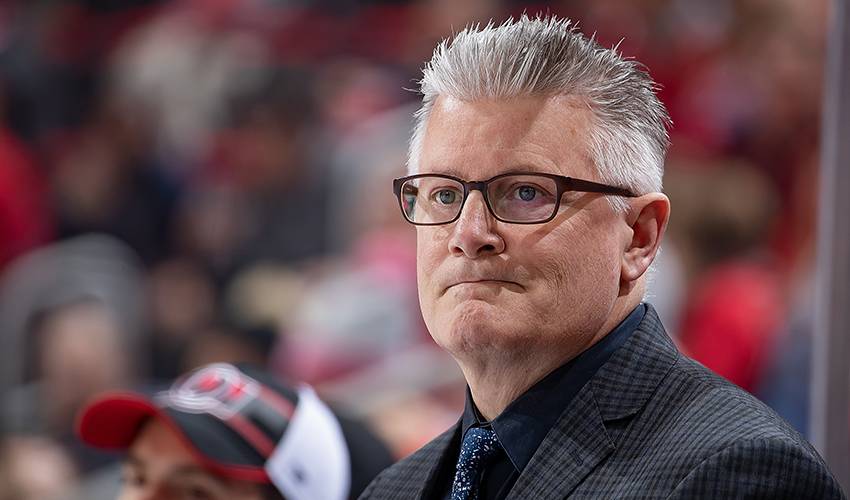 Senators general manager Pierre Dorion said he had made the decision to fire Boucher following the Senators 4-2 loss to the Edmonton Oilers Thursday night, but decided to sleep on it.

"We just felt as recently as probably this morning Guy wasn't going to be our coach moving forward," said Dorion. "For both parties we just felt it was time to move on. Obviously we made the decision and that's why we named Marc as interim coach until the end of the year."

The timing of the decision is somewhat surprising. Dorion gave Boucher a vote of confidence following Monday's trade deadline.

"I don't think anyone will disagree with me on this one that I've made his job pretty difficult in the last few weeks and we're going to support him," Dorion said at the time.

In the four days since, Dorion had a change of heart.

"We're fielding a team from now until the end of the year that can win games and we want to see this team win games, develop, grow and have a great culture," Dorion said. "Play for one another, play for the coaching staff, more importantly play for our fans.

"We saw that against Calgary a few days ago, I don't think we saw that (Thursday). At a certain point and time we felt that we had to make the decision today. It's a decision that tries to set a foundation for this organization in this rebuild to thrive as earliest as possible."

Dorion added the decision was made because they wanted to bring someone in with ideas on how to bring energy back to the team.

Following the end of last season, Dorion told reporters he wanted to see a greater implementation of the younger players and less days off. While younger players were in the lineup this season, the distribution of ice time was often questioned.

"I think in this rebuild playing the kids is crucial," Dorion said. "The development of our young players is essential for this team to have success moving forward."

Dorion met with players to advise them of the change, but also sent a message that the status quo was not good enough.

"I want to see a compete level that is unmatched," Dorion said. "I want to see a team culture that will transfer to next year and we're giving a chance to a lot of players that haven't been given the role that they're given now and we want to see them thrive."

Boucher, a 47-year-old native of Notre-Dame-du-Lac, Que., was previously head coach of the Tampa Bay Lightning from 2010-13. He then took a job in Switzerland before landing with the Senators.

Players admitted the timing of Boucher's firing was somewhat surprising with just 18 games remaining in the regular season, but at the same time don't want to just be going through the motions in the final five weeks and that change might not be a bad thing.

"It's one of those things if you keep doing the same thing and the results aren't there then it's tough to keep players engaged," said Mark Borowiecki. "I'm not here to sling mud or anything like that. I'm just trying to be as objective and honest as I can in the situation. There needs to be a way to keep players engaged to show that there's maybe a change to be had or a change to be made that's going to help us progress forward and when it doesn't happen personnel change will happen."

Borowiecki admitted Boucher is not the only one who needs to be held accountable for the team's performance this season.

"The onus is on everyone here," Borowiecki said. "I've said it numerous times and I'll say it again this is a results driven, results based business and we're not getting results and we haven't been getting results for a long time. The players felt the brunt of that. We lost some guys in here who were important to us and in turn you lose a coach as well so I think that goes to show there's blame to go around."

The Senators have gone through six different head coaches since Bryan Murray stepped away from the bench following the team's 2007 Stanley Cup run.

Dorion said the organization will do an extensive search for a new head coach following the season. Some of the criteria they will be looking for is a communicator, someone who listens, a teacher, someone who has structure and someone who can expedite the rebuild as quickly as possible.

Crawford, 58, is in his third season as a Senators assistant coach and will be considered for the position. He has served as an NHL head coach for 1,151 games, guiding the Quebec Nordiques, Colorado, the Vancouver Canucks, Los Angeles Kings and Dallas Stars.

The Belleville, Ont., native won the Stanley Cup in 1996 with Colorado.

Crawford believes this group is better than a last place team and will use the final weeks to build on the foundation that has been set.

"They're a group that emotionally is as good as any Stanley Cup team that I've been around," Crawford said. "The measure of the personality in that room is extraordinary. These are young guys, really young, and they are in a situation that is very, very difficult. This is nobody's fault, but this is a business where you're judged all the time."

Crawford announced that Chris Kelly, a former member of the Senators who won a Stanley Cup with Boston, would be joining the coaching staff.

Crawford's first game as interim coach will be Saturday on the road against Tampa Bay.

The firing culminates a tumultuous eight-day stretch for the Senators.

On Wednesday, a plan for a new downtown arena for the Senators was killed after the National Capital Commission announced mediation had failed in an effort to resolve a dispute between Melnyk and project partners.