Growing up in southern Ontario, Jake Muzzin and his friends used to pretend they were their heroes from the Toronto Maple Leafs. Now that he's been traded to Toronto, the veteran defenceman gets to pull on a blue-and-white jersey with his own name on the back. 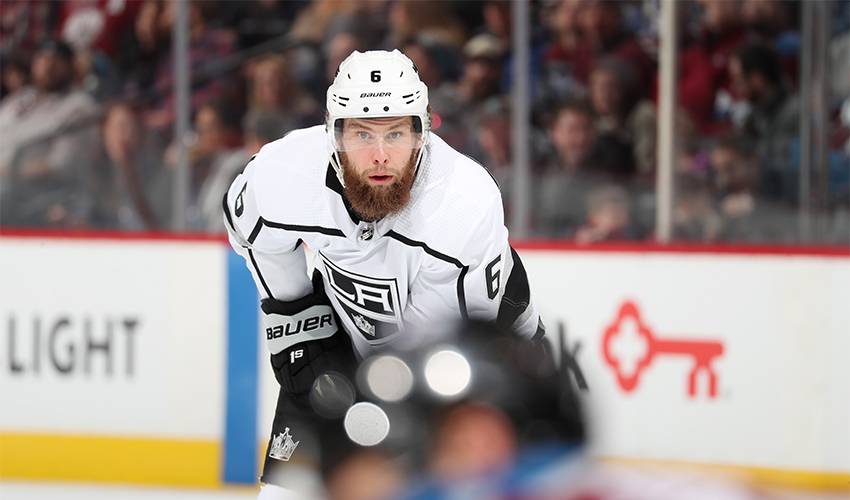 TORONTO — Growing up in southern Ontario, Jake Muzzin and his friends used to pretend they were their heroes from the Toronto Maple Leafs. Now that he's been traded to Toronto, the veteran defenceman gets to pull on a blue-and-white jersey with his own name on the back.

Muzzin was acquired by the Maple Leafs on Monday night in a deal with the Los Angeles Kings. Toronto sent minor-league forward Carl Grundstrom, the rights to unsigned prospect Sean Durzi, and the Maple Leafs' 2019 first-round draft pick in return.

"Everyone was a Leafs fan and I was included," said Muzzin of his childhood in Woodstock, Ont., approximately 140 kilometres west of Toronto. "Playing hockey at a young age, we looked up to Doug Gilmour, Wendel Clark. We were all Felix Potvin in net. It's kind of funny how life works. Here we are, I'm coming home to the team I routed for growing up."

Muzzin was an integral part of the Kings' Stanley Cup championship team in 2014, but L.A. has struggled this season, sitting last in the Western Conference standings. He now joins one of the top teams in the East as it gears up for a deep post-season run.

"That's why we play, to get to the playoffs and have a chance at winning the Stanley Cup," said Muzzin, who was in his second complete NHL season when the Kings won the league's title. "I was fortunate enough early in my career to have that opportunity and to be brought in on a good team and thrown into the fire a little bit.

"The last few years have been a battle and a struggle. I'm definitely excited to have another chance to get there and have another crack at it."

The 29-year-old Muzzin has four goals and 17 assists with a plus-10 defensive rating in 50 games with the Kings this season. He has 51 goals and 162 assists in 496 NHL games with 298 penalty minutes and a career plus-24 rating. Muzzin has also appeared in 50 career playoff games, scoring seven goals and adding 13 assists.

Maple Leafs general manager Kyle Dubas said negotiations began with Los Angeles GM Rob Blake in late December and that Muzzin checks a lot of boxes for Toronto, including having a year left on his contract before becoming an unrestricted free agent. He is owed US$4 million for the 2019-20 season.

"Our preference was to acquire players that have some term on their deals," said Dubas. "Contending is something we're aiming to do year in and year out as best as we possibly can for as long as we can.

"That's one of the things that was appealing about Jake. He's still in his prime and we're happy to know that he's going to be here for at least the next year and a half and two runs (at the Stanley Cup.)"

Muzzin adds depth to a Toronto defensive corps that has struggled at times this season, likely matching up with Morgan Rielly in the Maple Leafs' top pairing.

Igor Ozhiganov, Justin Holl and Martin Marincin could be the odd men out in Toronto's new defensive scheme, with Jake Gardiner and Nikita Zaitsev forming the Leafs' second pair and youthful Travis Dermott linking up with veteran Ron Hainsey in the third pairing.

"I do like our D. We've talked at different times about trying to bolster it," said Dubas. "Certain players have made outstanding strides this year, most notably Morgan Rielly has been outstanding from start to finish and thrust himself into the upper echelon of the league.

"We've got a very good group there so to add Jake and bolster that group is something that we're very happy about."

Dubas added that Gardiner, who has missed two games with back spasms, will likely be back on Friday when the Maple Leafs visit Detroit.

Muzzin represented Canada at the 2015 world championships and the 2016 World Cup of Hockey, winning gold at both. Muzzin was originally selected by the Pittsburgh Penguins in the fifth round (141st overall) of the 2007 NHL Draft. He signed an entry-level contract with Los Angeles on January 4, 2010.

Grundstrom has 13 goals and 16 assists in 42 games this season with the American Hockey League's Toronto Marlies. He had eight goals and six assists over 20 post-season games last year as part of the Marlies' AHL Calder Cup run after he had a goal and two assists in two regular-season games in 2017-18.

The 21-year-old Grundstrom was drafted in the second round of the 2016 draft by the Maple Leafs and has yet to play in the NHL.

"His compete, his effort, and his work, have been mainstays," said Blake on Grundstrom's appeal to the Kings. "His sense and his poise are above average and he's a strong skater."

The 20-year-old Durzi is a right-handed defenceman still in the Ontario Hockey League. Drafted in the second round of the 2018 NHL draft, he played his entire junior career with the Owen Sound Attack before being traded to the Guelph Storm partway through this season.

Note to readers: This is a corrected story. A previous version listed the incorrect year for the Kings' most recent Stanley Cup win.