Matthews, Marner reflect on 'The Nutcracker' cameo: 'It was nerve-wracking'

Auston Matthews isn't one to get nervous. 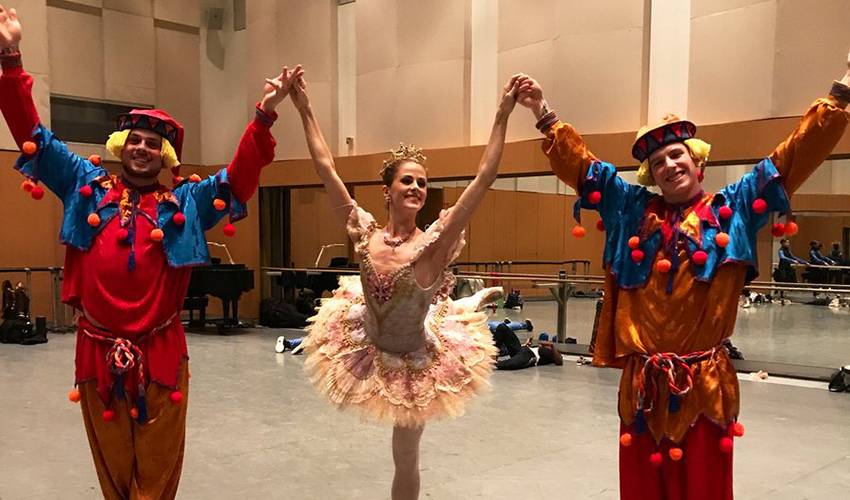 TORONTO — Auston Matthews isn't one to get nervous.

The star centre for the Toronto Maple Leafs is used to suiting up in front of packed arenas under the bright lights with 20,000 sets of eyes trained on his every move.

Put him in a colourful costume at The National Ballet of Canada, however, and it's an entirely different story.

Matthews and Leafs teammate Mitch Marner made celebrity cameo appearances as Cannon Dolls in a performance of "The Nutcracker" on Wednesday night, a decision he was having second thoughts about moments before stepping in front of the crowd.

"It was nerve-wracking," Matthews said with a grin Thursday morning. "We jumped at the idea to do it. About 20 seconds before we went on stage I was really contemplating it, but I'm happy I did it. It was a pretty neat experience.

"Something not many people can say they've been able to participate in."

The roles were small — they lasted less than three minutes and didn't involve any actual ballet — but both players said it seemed like an eternity.

"It felt like we were up there so quick," Marner said. "But when we were in the moment it felt so long, which is kind of crazy."

Clad in baggy pants, shirts and hats, the 21-year-olds were tasked with accompanying a cannon operator in the show. Matthews played the role of the excited Cannon Doll, waving his arms like a windmill, while Marner's character was scared, often covering his mouth with his hands.

"My pants were massive on me," said Marner, who claimed he didn't have the same nerves as Matthews. "I kept joking around that I could fit three people into them."

"Those outfits were pretty interesting," said Matthews, who has appeared a couple of fashion publications already this season. "Probably one of the most comfy outfits I've ever worn."

So how did they determine the roles? Simple, since one doll had to jump in the arms of the other.

"I wasn't going to carry Matts off the stage," Marner added.

Matthews and Marner, who watched the second act from the audience, were amazed at the athletic ability of the ballet dancers.

"They're very talented," Matthews said. "It's crazy what they can do. Every time they jumped I was thinking in my head I would for sure fall and break my ankle doing this."

Leafs defenceman Morgan Rielly took in the show with his mom and was proud of his teammates.

"I got nervous for them so I'm sure they were nervous, but they were great," Rielly said. "Good for those guys for getting up there."

Florida Pathers goalie Roberto Luongo, whose team visited Toronto on Thursday, playfully tweeted: "After such a big night should probably consider giving them the night off tomorrow no?"

"I don't think they'll be taking the night off," Rielly joked to reporters.

Matthews and Marner said they would be interested in reprising the roles, which former Leafs captain Mats Sundin also played during his time with the team, next year.

But it sounds like organizers have their sights set on another Toronto star.

"They asked for John Tavares," Matthews said. "We'll give him some tips, but maybe I'll be in the crowd for that one."

What’s changed about the Mitch Marner that Laura Stacey knew from their high school days? Not one thing.